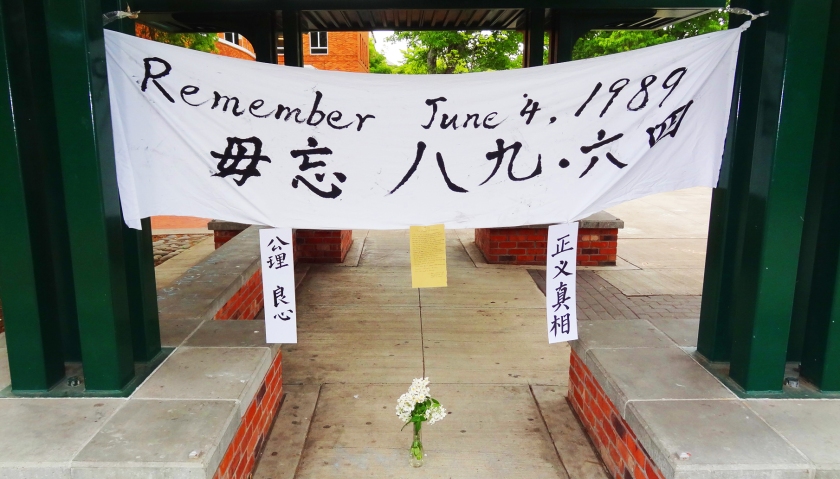 In an interview I gave to RTI (Radio Taiwan International), I was persuaded to comment on why, for many years, Taiwan has not been very much concerned with, or supportive of, the 1989 Tiananmen Protest Movement and the June Fourth Massacre. This contrasts with the great support given by the Tsai Ying-wen (蔡英文) Administration to the international conference on the 30th Anniversary of the June Fourth Massacre held in Taipei this May. I chose to speak about the significance of the Tiananmen Protest Movement and June Fourth Massacre in Taiwan, China and the world community, thinking that it would give a broader perspective and different levels of meaning to what had happened in that fateful year and since. This brief account can be seen as having been adapted from that encounter.

The 1989 Tiananmen Protest Movement had been in the making for many years. The 1980s in China was relatively speaking more open and free. The ruling party and the government under Deng Xiaoping (鄧小平) had been pursuing a policy of opening up and reform. Intellectuals and university students were greatly encouraged and many of them played important parts in helping promote the reforms. More conservative forces within the Party had not been idle, either, and the struggle culminated in the removal of Hu Yaobang (胡耀邦) from his position as Secretary-General of the Party. When he died on 15 April 1989, university students in the Beijing area poured out to commemorate his passing, thus setting the stage for the protest movement and the massacre.

When the news reached Taipei, there was a great outpouring of anger and sadness. The responses by the government and civil society were easily predicted. It was taken to be a demonstration, if any were needed, against the tyrannical rule of the Chinese Communist Party (CCP). But fairly soon the concerns receded. For by that time the authoritarian rule of Chiang Kai-shek (蔣介石) and his son Chiang Ching-Kuo (蔣經國) had come to an end with Lee Teng-hui (李登輝) becoming president and the dominant leader of the party. In the community, the voice and agitation for Taiwanese independence had been steadily gaining ground. It should not come as a surprise that in the desire to be separate from China, which at that time was poor and backward and not yet a threat to Taiwan, the 1989 Tiananmen Protest Movement and the June Fourth Massacre were fairly easily forgotten. What makes the difference in 2019 is that China has been rising and becoming more and more powerful. The threat to Taiwan has been much more in the minds of the Democratic Progressive Party and the government. The change of attitude could be summed up as a movement from indifference to the realization of the urgency to fight for self-preservation.

For China it is quite a different story. Simply put, at first, it was a spontaneous demonstration against corruption and the theft of property by the Party elite but it soon transformed itself into a large social movement for freedom, the rule of law and democratic governance, reminiscent of the May Fourth Movement of 1919 to 1925. Protest leader Wang Dan (王丹) recalled his excitement when he had opportunity to speak to intellectuals and scholars who had taken part in the May Fourth Movement. Liu Xiaobo (劉曉波) dwelt upon what he thought as the difference between the two movements. The former was successful, he said, primarily because the warlords’ government of 1919 was weak while the CCP was powerful. Liu was quite harsh in his criticism of many of the intellectuals and student leaders saying that they had been too proud, not knowing how to negotiate with the authorities, nor caring to connect with the citizens and workers. His judgment obviously has been challenged and indeed in the international conference in Taipei much discussed. I do not know enough to take sides on this debate, but what is certain is that the CCP is now confronted with very serious problems, both domestically and internationally. The trade war with the U.S. does not make the situation easier. It is ironic that many democratic dissidents in China and in exile are fervently in support of Trump simply because he apparently puts great pressure on China, deliberately choosing to neglect his record of discrimination against blacks, women and Muslims. China is not a stable and peaceful country and it will definitely meet with serious political, social and economic upheavals in the decades to come. Recourse to traditional Asian culture and/or Asian values vaguely defined to suit the need for authoritarian rule will not save the Communist regime.

Turning to the world community it is without doubt that the 1989 Tiananmen Protest Movement and June Fourth Massacre have been a part of the post-World War II world movement for universal values and international human rights standards promoted by the United Nations. It is not necessary to argue that it contributed directly to the collapse of the Soviet socialist camp or to the Jasmine Revolution in Africa. The students in Burma rose a year prior to the Tiananmen Protest Movement when they took to the streets against the military government in 1988, and many rebellions and revolutions for human rights and democratic governance could be cited. It is unfortunate that at the time of this writing the world community is faced with the challenge of populism in Europe and the coming to power of Trump in the United States. It could be imagined that if the world has been spared populism and Trump, the United Nations would be more influential than it is now, and the United States and Europe, with all their faults, could still be counted upon to encourage, if not lead, the world in a gradual process of improvement for a better future. The struggle for human dignity, basic rights and a better life, to be sure, will be long and hard, but there is no alternative to commitment by, and engagement from, every individual, civil society organization, government and the United Nations, or what is left of it.

Reflecting on the 30th anniversary of the massacre in Beijing in 1989, this article is part of a special issue looking at the connexions between this event and the social, political and cultural life in Taiwan.