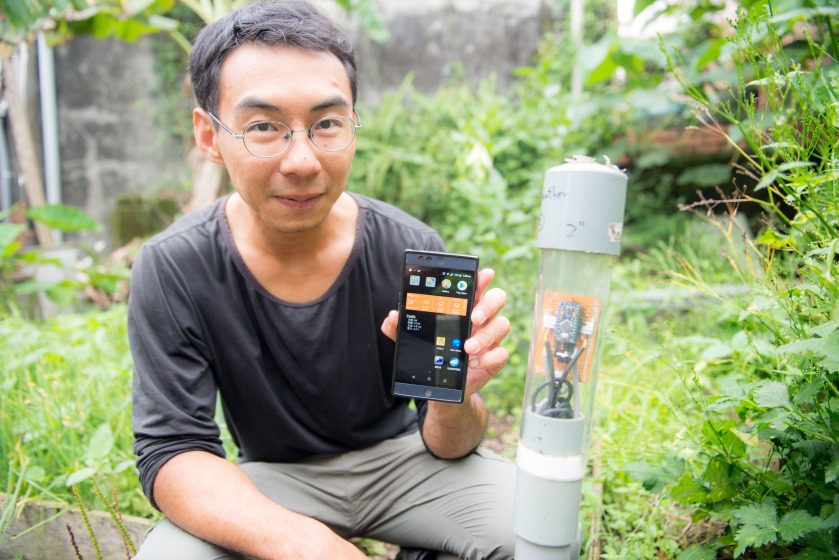 Chen Xing-Yan（陳幸延） got involved in agriculture after moving to Yilan in 2014. Chen had made the somewhat unusual switch from engineering to farming and learnt how to grow groups. Due to his engineering background and being inspired by international projects like Open source Ecology and the rise of the Maker’s movement in Taiwan, Chen became interested in the intersection of technology and agriculture. With the help of the LASS community, which supports open source environmental sensing technology, Chen got hold of a Farmbot in 2017 and established the Open Hack Farm, a project dedicated to promoting open source technology and open data in farming. Since 2017, Open Hack Farm has been a project of constant experimentation for Chen as he has slowly learnt new farming techniques, invested in new technology, and created vast open-access datasets based on his experiences.

Chen admits that the Farmbot itself wasn’t much of a success. The Farmbot is an open source precision agriculture device developed in the United States that first became commercially available in 2016 capable of planting and tending to a range of crops and collecting and storing data about them. The open source concept refers to source code (for software), and design blueprints (for hardware) made publicly available, allowing anyone to modify and redesign as desired. Inspired by Maker Faires, a sort of “show and tell” where people come together to show off their designs and prototypes, Chen had hoped he would work on the Farmbot and help optimise it for local conditions, but this proved more difficult than he expected. On reflection, he now notes that the device wasn’t designed for outside farming, which has made the device largely unhelpful in Taiwan.

For Chen, the goal of this tinkering and technology is in helping to promote climate-sensitive and sustainable agricultural practices. He hopes that new tech and additional data can help farmers work towards a more optimised form of farming, requiring less labour and causing less environmental damage. This concern is perhaps most visible in his recent project “crop doctor” (植物醫生）to produce open data on how to help heal and protect crops. As a proponent of organic crops, a movement that has gained steam in Taiwan with the emergence of new publications like News&Market, Chen is concerned about the overuse of industrial pesticides and the environmental damage it can cause. Chen worries that many farmers, unsure of how to deal with certain crop illnesses or pests, will use all chemical solutions available, which kills all pests but also hurts the land and other animals. Whereas 20th-century innovations in agricultural science greatly increased yield at the cost of great environmental damage, the hope of projects like Open Hack Farm and others is that 21st-century technological innovations can increase yield whilst helping heal environmental damage. He is now trying to experiment with alternative treatments for plants, which he records in an open database, hoping that others can follow his lead.

This project is not just the work of Chen. Over the last few years, a growing community of engineers and farmers have consulted Chen and got involved with sharing new technology and tips. The Open Hack Farm Facebook has become a place for people to come together and share information, stories and events. Unrelated to Open Hack Farm, the g0v community also hosted a special hackathon in Nanzhuang County, Mialo, in 2021 with a range of collaborative farming projects. This included a project to create a new ‘farming calendar’ reflective of the crops suitable for farming at different times of the year in Taiwan as Taiwan continues to get warmer each year. There are similar projects outside of Taiwan, too. For example, the Hackerfarm in Japan or Open-Source Ecology, both dedicated to promoting open source technology in farming. In Taiwan, we can contextualise the emergence of such projects at the intersection of two social movements that gained momentum over the 2010s, namely, the civic tech movement and alternative food movements. As communities promoting the use of technology for the social good and communities promoting food justice and alternative food ways have both continued to grow and gain support, a range of projects and groups have emerged at the intersection of the two. Combining concern for food justice with a concern about technology use, projects like Open Hack Farm are interested in using technology to address issues of availability sustainability and promoting alternative forms of food production receptive to Taiwan’s changing climate.

We can also contextualise such movements within the context of so-called “precision agriculture,” also referred to as “smart agriculture” or “agriculture 4.0.” This refers to the use of (primarily proprietary, non-open source) technology systems among many stages of agro-food systems. With the rise and decrease in price-per-unit of Internet of Things technology able to produce real-time data on anything from water acidity to temperature and more, it has become increasingly common internationally to see such devices installed on agricultural land to help optimise farming processes. Taiwan’s Council of Agriculture has been increasingly investing in so-called smart agriculture over the last few years, hoping it can help remedy the land and labour shortages facing its agricultural sector.

Although movements like Open Hack Farm might sound like just a type of smart agriculture, the goal of such open source projects often runs counter to the operation of many smart agriculture programs. Christopher Ali has warned of the increasing centralisation of data and technology that often accompanies the implementation of precision agriculture. Whereas open source projects promote the sharing of data, source code and technology design, precision agriculture projects often risk leaving farmers reliant on devices and data sets that they have little control over. Ali also notes that this makes farmers reliant on a particular company in charge of data storage and usage. The hopes of Open Hack Farm are that greater access will allow for collective innovation and collective control of technology.

This said, not every farmer can also be an engineer, and not every farmer would benefit equally from the increased access and technology control granted by open source alternatives. The community around Open Hack Farm has grown over the last few years, but Chen admits that uptick and interest remain low. Although some young farmers have contacted him, and there is a community growing online, Chen is clear about what he sees as the divide between the older generation of farmers and the younger, new generation of farmers. Those who have got involved with Open Hack Farm almost exclusively fall into the latter of these two groups. Open Hack Farm and similar projects are thus facing an issue many open source projects inevitably face: how to raise public awareness and convince others that questions of technology aren’t just for engineers to consider. As alternative food movements continue to develop and food politics has risen higher on the political agenda in Taiwan, there is perhaps still more opportunities for growth and collaboration between those concerned with the future of how food is produced in Taiwan. For Chen, the primary concern is still sustainability and environmentally sensitive agriculture. Open data and open technology is just a means to the broader end of preparing Taiwan for an increasingly unstable climate future.

Sam Robbins is a project coordinator for Civic Sense at Open Culture Foundation and an editor and translator at Taiwan Insight. He graduated with a master’s degree from the Department of Sociology, National Taiwan University. He is interested in the intersection of (open) technology and data and our changing environment.

This article was published as part of a special issue titled ‘Agriculture and Food Studies’.