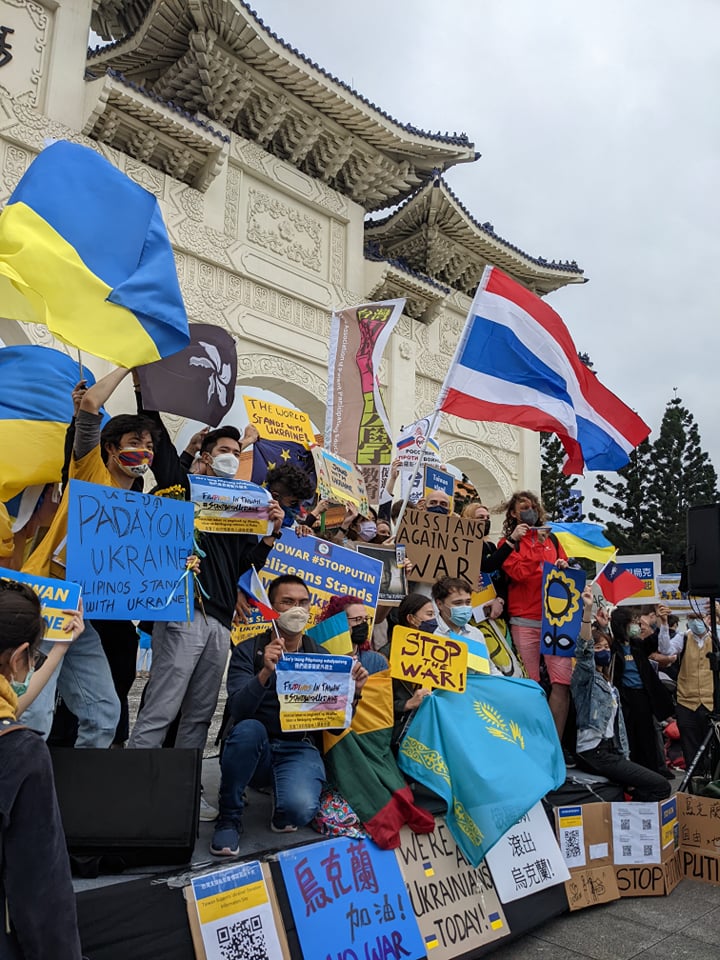 This article is republished from New Bloom. Read the original article here.

Several hundred rallied at Liberty Plaza yesterday in the largest of a series of solidarity rallies that have taken place in Taipei since late February. The event sought to call attention to the humanitarian crisis that has ensued since the Russian invasion of Ukraine, as well as show support for Ukrainians at a time in which their democratic freedoms and sovereignty are threatened.

Previous solidarity rallies took place outside the Moscow-Taipei Coordination Commission in Xinyi. This included rallies on Friday, February 25th as well as Saturday, February 26th, and on Tuesday, March 1st. Yesterday’s rally was planned earlier in advance compared to previous rallies, which were held on short notice in response to the developing situation.

Among the speakers were a number of pan-Green politicians. This included independent legislator Freddy Lim, DPP deputy secretary-general Lin Fei-fan, DPP legislator Wang Ting-yu, DPP Matsu Office director Lii Wen, and DPP city councilor candidate Vincent Chao. Comments touched upon the importance of standing in defense of democracy, freedom, and cultural pluralism, as well as how Taiwan can see itself in Ukraine’s plight, given the threat of Chinese invasion.

Thomas Liu of the KMT Youth Corps was also a speaker, though there was significantly more pan-Green participation in the event compared to the pan-Blue camp. The KMT has also come out in support of Ukraine, though the party has seen flak for a banner that accidentally reversed the colors of the Ukrainian flag, and comments by former chair Hung Hsiu-chu suggesting that Taiwan should not judge as to whether Ukraine or Russia was at fault for the invasion.

Likewise, among the speakers were Ukrainians living in Taiwan, who gave a talk at the event about the situation by their friends, families, and loved ones. The event also featured the playing of the Ukrainian national anthem and musical performances.

What was also visible from the crowd was representatives of other nationalities in Taiwan. This ranged from Hongkongers, with a black Bauhinia flag from the 2019 protests, to Belizeans, Filipinos, and Malaysians in Taiwan, and the Russian flag, from individuals that carried signs stating that they were Russians opposed to the war.

Slogans on placards ranged from encouragement to Ukrainians, to statements that “We are all Ukrainians,” or “The world stands with Ukrainians.” Indeed, the rally took place one day after the annual commemoration of Tibetan Uprising Day, which was held earlier than the actual anniversary because March 10th falls on a Thursday this year. One can also draw parallels between the two events.

As the Russian invasion of Ukraine continues, one expects further solidarity rallies to take place in Taipei, as well as other efforts to assist Ukrainians. A fund set up by the government for donations to Ukraine has received over 200 million NT to date, with contributions both from private individuals and business groups. Other solidarity events held in Taipei range from performance art, discussions, to club nights.

In the meantime, the effects on Taiwan of the invasion of Ukraine are less clear. A bipartisan delegation of former defense officials was sent to Taiwan by the Biden administration last week, which was a move meant to reassure of strong relations between Taiwan and the US.

With the US and European Union countries largely united in their condemnation of Russia’s actions, it is a debated issue at present as to whether Russia and China will be pushed into further alignment by the aftermath, or whether China will find Russia’s actions inconvenient. In consideration of its tense relations with the US, China may not necessarily find allying with Russia expedient, as this may draw it into an unwanted conflict. This has not prevented discussion as though this will take place, or comparisons with Taiwan, with the suggestion that Taiwan could suffer a similar fate.

This article is republished from New Bloom. Read the original article here.