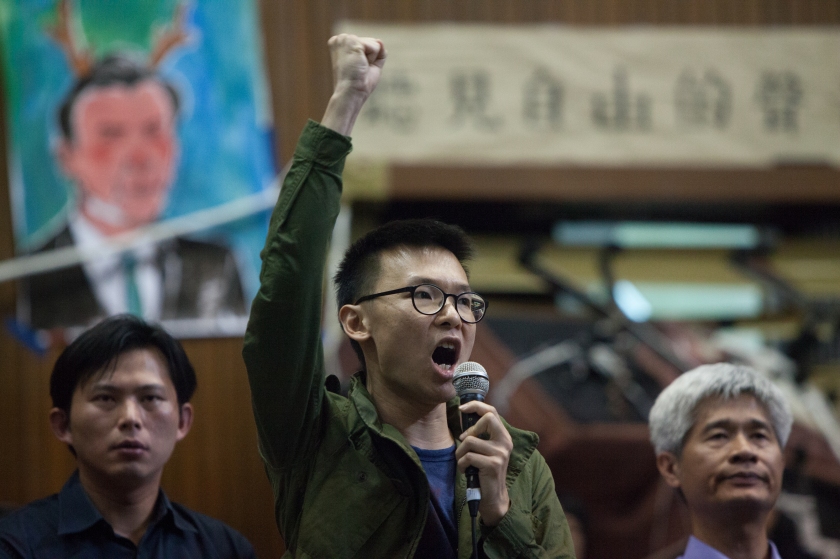 Although the Sunflower Movement’s three-week occupation of Taiwan’s parliament in the spring of 2014 was protesting against a trade agreement with China, it had deeper root causes. One of these was a sense of dissatisfaction and alienation with Taiwan’s mainstream political parties. A mark of the success of the Sunflower Movement was that an alliance of student protestors and civil society organisations was able to halt further cross-Strait agreements. They had achieved something the main opposition parties in parliament, such as the Democratic Progressive Party (DPP) and Taiwan Solidarity Union (TSU), had been unable to do.

Even before the Sunflower occupation, plans had been afoot to create alternative political parties that would better represent the interests of Taiwan’s civil society. This process of new party formation was accelerated in the aftermath of the Sunflower occupation. Two new parties that emerged and were officially established in early 2015 were the New Power Party (NPP) and Social Democratic Party (SDP). Additionally, some activists chose to work together with the independent Ko Wen-je (柯文哲) in his 2014 Taipei mayoral campaign and then entered his city government. Others joined the older movement party, the Green Party Taiwan (GPT), which would go on to create the GPT-SDP Alliance to contest the 2016 national elections.

Almost eight years since the end of the Sunflower occupation, to what extent have the hopes of transforming Taiwan’s party system been achieved? A number of developments suggest the Sunflower legacy on party politics has been quite limited. The NPP has suffered from party infighting and seen many of its best-known politicians defect from the party. Although it showed promise in becoming the third-largest party in 2016 and made important local breakthroughs in 2018, it only retained its presence in the Legislative Yuan in 2020. The GPT made limited local election breakthroughs in 2014 and 2018 but could not repeat this at the national level in either 2016 or 2020. The SDP looks on the verge of extinction, especially after one of its most well-known leaders defected to the DPP in 2019. As late as 2016, many civil society linked candidates still sought the endorsement of Taipei mayor Ko Wen-je. However, by the time he created the Taiwan People’s Party (TPP) in 2019, it was clear Ko had dropped any pretence of being a representative of progressive politics. As Brian Hioe has concluded on the TPP, it ‘is a conservative political party and one that slants toward the pan-Blue camp.’

A range of factors can explain the seemingly limited impact of the Sunflower Movement on Taiwan’s party system. However, for space reasons, I will just focus on the alliance strategies of movement parties and the strategies of mainstream parties.

One of the remarkable features of the Sunflower Movement was its ability to bring together such a diverse coalition of groups together against the Cross-Strait Services Trade Agreement. However, this kind of unity did not persist long after the occupation. The initial attempt at a post Sunflower movement party, the Taiwan Citizen Union, suffered from bitter infighting and its split led to the separate establishment of the NPP and SDP in early 2015. The GPT experienced an even earlier split, in which some of the party’s most charismatic figures broke away to create the Trees Party in mid-2014. An alliance of the NPP, SDP, GPT and Trees Party would have been a formidable force in 2016. Moreover, it would have been a union of activists with similar political values. However, this was ruled out largely due to clashes of personality and the disdain that some NPP leaders held for the older movement party, the GPT. The GPT and SDP were able to create an electoral alliance for the 2016 elections, but it did not function well. Some GPT figures sometimes seemed more preoccupied with attacking the alliance’s most competitive district candidate, Fan Yun (范雲), than supporting their own campaign.

There were similar patterns of divisions in the 2018 local elections. In the aftermath of 2016, many of the leading civil society figures that had led the GPT-SDP Alliance dropped out of politics to return to their NGOs or academic life. Although the GPT-SDP Alliance did not officially dissolve, there was no meaningful joint campaigning between the component parties in the 2018 local elections. Rather than cooperation, the progressive parties appeared more focused on competition or eliminating their rivals. For instance, there were up to three different alternative party candidates in many districts. In particular, the NPP’s nomination appeared to be directly targeting the districts with stronger GPT or SDP candidates. A collaborative approach from the alternative parties could have brought much greater civil society representation into local council politics.

In the most recent national elections, the NPP and GPT faced competition from two more well organised smaller parties, the TPP and Taiwan State Building Party (SBP). Once again, the progressive parties failed to cooperate. Negotiations with a view to electoral alliances between GPT and SDP, as well as between the GPT and SBP, were unsuccessful. GPT local councillor Wang Hau-yu (王浩宇) made frequent attacks against the NPP and even allegedly plotted with a leading TPP figure to work against the NPP. In one case, Wang targeted NPP legislator Kawlo Iyun Pacidal, who had previously been a GPT member but defected to the NPP during the 2016 campaign. Wang’s accusations against Kawlo of abusing her power led her to be expelled from the NPP and lose her parliamentary seat. The lack of cooperation again diluted the alternative parties’ impact in 2020. While the three progressive parties had shared 9 per cent of the national vote in 2016 and won five seats, four years later, their vote share rose to 13 per cent, but their seats fell to just four.

A second factor that has undermined the impact of the Sunflower Movement on party politics has been the accommodative strategies of the DPP. The DPP was able to reap the benefits of the Sunflower wave in both the local elections in 2014 and national elections in 2016. A key reason has been how it has been able to absorb the appeals and human resources of civil society associated with the Sunflower Movement. This was clear in the way in the 2016 election, Tsai Ing-wen included key civil society appeals such as same-sex marriage in her political adverting. Tsai’s campaign material also included numerous symbolic messages designed to appeal to social movement linked voters. For instance, her TV ads referenced black box politics, a term viewers would naturally associate with the Cross-Strait Services Trade Agreement. Similarly, she used protest symbols such as the land justice movement icon of Tapu. Although her government hesitated on delivering on same-sex marriage after coming to power, the eventual passage of legislation in May 2019 gave the party important progressive credentials in Tsai’s 2020 re-election bid. In other words, the DPP has sought to steal key movement party issue appeals.

Equally important has been how the DPP has absorbed activists from the Sunflower Movement and civil society. These people could have served as the basis of a stronger alternative political party. This was something the DPP made a prominent feature in its 2016 campaign by highlighting the civil society background of its parliamentary party-list nominees. For instance, one of its newspaper ads trumpeting these candidates included two former GPT party leaders and a well-known land justice movement figure, Frida Tsai (蔡培慧). [1] Similarly, the DPP could appeal to Sunflower supporters through its alliance with the NPP in 2016. Tsai appearing on the same stage as Sunflower leader and NPP candidate Huang Kuo-chang (黃國昌) naturally benefitted the NPP in its three district races but also benefitted the DPP in both the presidential and majority of district races.

More recently, the DPP has continued to adopt this strategy of absorbing the human resources of Taiwan’s civil society. For instance, in the aftermath of the DPP’s 2018 local election defeats, it appointed one of the most prominent Sunflower leaders Lin Fei-fan (林飛帆), as its Deputy Secretary-General. Moreover, in the 2020 election, it offered less space for allied smaller parties compared with 2016. For instance, it effectively absorbed the SDP by nominating its party founder Fan Yun on the DPP party list in 2020.

The DPP’s absorption of the Sunflower Movement activists could be seen as a failure of the original hope of a true alternative civil society representative in Taiwan’s party system. However, those that chose to be incorporated into the DPP would argue they have been able to promote progressive politics from within the DPP and, in the process, reshape the party. There are similarities with how the DPP absorbed activists from the Wild Lily Movement in the 1990s to its Sunflower co-option strategies. In both cases, this served to diversify and rejuvenate the DPP. It could be argued that the changing nature of the DPP contributed to it following through on key civil society demands, such as enhancing LGBT rights and moving towards a nuclear-free homeland. While the original goal for a new alternative party has not been fully realised, perhaps the greatest party system legacy of the Sunflower Movement lies in the changing nature of the DPP.

Dafydd J. Fell is the Reader in Comparative Politics with particular reference to Taiwan at the Department of Political and International Studies of the School of Oriental and African Studies (SOAS), University of London. He is also the Director of the SOAS Centre of Taiwan Studies. His book Taiwan’s Green Parties: Alternative Politics in Taiwan was published in March 2021.