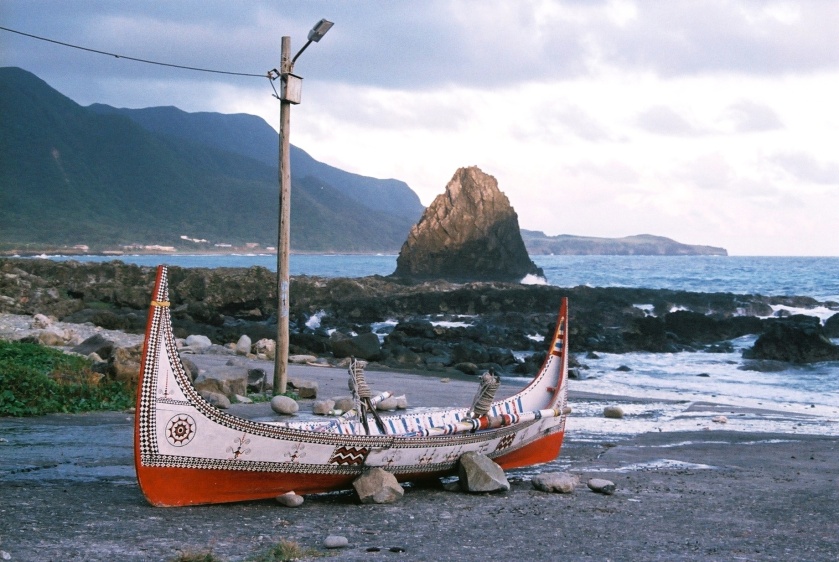 The Tao/Yami ethnic group – who live in Lanyu (Orchid Island), an island located along the eastern coast of Taiwan – boast distinct cultural characteristics, which include flying fish festivals, distinctive wooden canoes, and underground houses. These cultural characteristics attract many thousands of tourists to the island, whose numbers grew from 47,862 in 2000 to 114,975 in 2016. Meanwhile, the number of local residents number only about five thousand. The tourism boom in Lanyu has created many job opportunities and the economy of the Tao has flourished. However, the rapidly-changing local economy, from fishing and agriculture to tourism, has caused dramatic changes to the Tao’s culture and to the environment in Lanyu. This tourism-dependent economy has also reduced Tao’s resilience to climate change.

“The Tao’s traditional food sources include coral reef fish, migratory fish and swamp taro, which are available all year round and can withstand typhoons. As tourism continues to develop, however, the Tao become more attracted by the jobs that tourism has to offer, which results in a reduction in the planting and harvesting of taro.“

The characteristics of the Tao ethnic group

The Flying Fish arrive at Orchid Island regularly each year, and constitutes an important source of food for the Tao. Hence, the fishing season, which coincides with the irruption of flying fish, is the main focus of the Tao’s calendar. The order in which the Tao catch the flying fish forms is a specific practice; the related norms, customs and taboos are communicated through the telling of myths. During the irruption season of the flying fish, the Tao are prohibited from catching coral reef fish along the coast and offshore. The Tao hold a number of ceremonies during this period to demonstrate the taboos, fishing methods, and living norms. Together, these taboos and norms constitute the Tao’s flying fish culture. The flying fish season represents the core of the life and culture of the Tao tribe and the annual rituals and lifestyles are operated according to the flying fish season.

Canoes are important tools for earning a living,  as they allow the Tao people to go sea fishing as well as representing the social status of the Tao. The body of a canoe is assembled from a combination of different types of wood; based on the size of the body, approximately 21-27 pieces of wood plates are used. Due to its position and functional necessities, the wooden plates must be made of different materials.

The Tao house is part-underground, and is referred to as an underground house. It reflects the unique culture of the Tao tribe, and the structural style was developed to avoid the impact of typhoons. The main house is built approximately two meters underground with only the roof above the ground, which effectively defends the house from damages caused by strong wind. These traditional houses inspired the eco-friendly architecture designed for the 2010 Taipei International Flora Exposition.

The impacts of tourism on Tao’s culture and environment

Tourism has had a negative impact on the endangered species in Lanyu, as well as the Tao people’s culture. For instance, in response to the increased volume of traffic due to tourism, the around-the-island highway has been widened. During this process, Pandanus trees were chopped down, putting coconut crabs in danger of extinction. To promote eco-tourism, trips to observe Elegant Scops Owls and Birdwing butterflies have been conducted, yet they have interfered with the breeding habits of these two protected species. Elegant Scops Owl and Birdwing butterfly tours have also broken the taboo which in Tao culture which regards these animals as “evil spirits”.

The decrease of these three species also reflects the decline of the Tao’s traditions and cultures. The drop in the number of coconut crabs is associated with the removal of the Pandanus trees; this indicates that the ethnobotanical resources available to the Tao tribe have reduced significantly, while the traditional crafts developed from the Pandanus trees have also disappeared. The decrease in Elegant Scops owls and Birdwing butterflies reflects the weakening traditions of the taboos. The frequency of Tao people entering ecologically sensitive lands (forbidden areas) has increased, and the Tao are more willing to lead tourists into these areas, which significantly increases the amount of human disturbances in ecologically sensitive areas.

Impacts of tourism on Tao’s resilience to climate change

Climate change poses a major threat to the Tao economy and their livelihoods, as they are directly related to the increase in number of typhoons. Typhoons interrupt sea and and air transportation networks between Lanyu and Taiwan. The transportation networks are fundamental to the survival of the Tao, which is highly dependent on food and energy imports. Such dependencies has increased with the development of tourism.

The Tao’s traditional food sources include coral reef fish, migratory fish and swamp taro, which are available all year round and can withstand typhoons. As tourism continues to develop, however, the Tao become more attracted by the jobs that tourism has to offer, which results in a reduction in the planting and harvesting of taro. This reduction has resulted in the abandonment of taro fields and the traditional man-powered fishing boats, which have been replaced by motorised boats. The Tao depend more and more on imported food and gasoline, which can be scarce, particularly during the Typhoon season. Because of climate change, typhoons are expected to be more frequent and more powerful. The Tao’s dependency on imported food and gasoline, enhanced by the development of tourism, make them highly vulnerable to climate change.