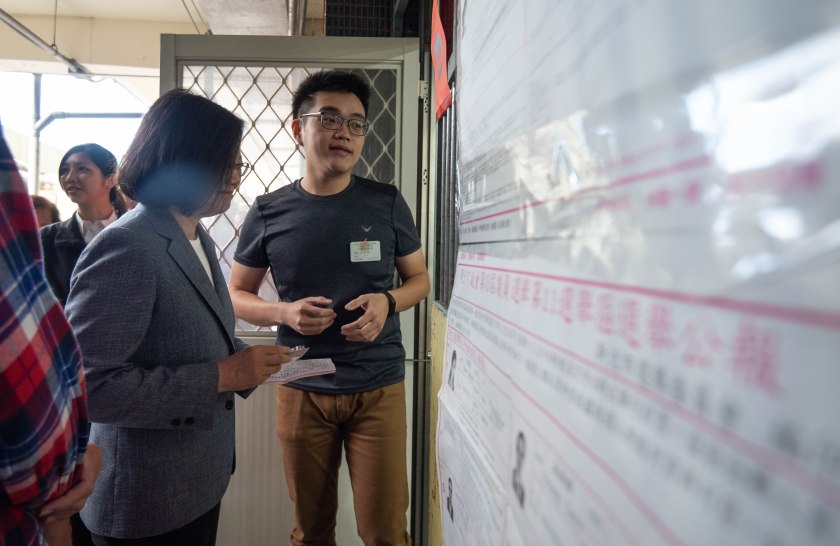 This question was repeatedly met with a firm stance by the Taiwan Affairs Office of the State Council (TAO) in Beijing. Right across China, public and private media platforms, think tanks and scholars all loosely took the same line as the TAO to express their fixed attitude towards the trivial political farce taking place on the island. But what do ordinary Chinese people think?

Due to the state’s control of information, the opinion of Chinese people regarding the vividly democratic election in Taiwan is unknown. Conducting a sensitive political poll in China is forbidden, and it is impossible to interpret Beijing’s true sentiments. Nevertheless, this online post attempts to explore this interesting puzzle. What do the Beijing government and ordinary Chinese people think about the elections in Taiwan? And what are the reasons for their opinions?

The election of the Beijing government must not be likened to the elections in Taiwan. While most countries in the world are either democratic or trying to be so, it is difficult for the government in Beijing to persuade its citizens as to why China has to stick to the thousand-year-old, top-down political approach. The Chinese Communist Party (CCP) would argue that democracy is inefficient and unsuitable for Chinese society, and that China is a unique and special case which is not ready for full democracy. However, comparing the political transformation across the Taiwan Strait, these ‘reasons’ turn out to be no more than excuses.

Chiang Kai-shek and Mao Zedong passed away in 1975 and 1976, respectively. Their successors in Taiwan and in China began to ease the political control they had established. China initiated its policy to open up and reform in 1978, while Taiwan started out on its road to democratization at approximately the same time. China’s mass student political movements were established even earlier than those in Taiwan. Both countries experimented with elections at the local level during the early stages of political reform and both enjoyed some degree of social liberalization in the 1980s.

From an historical perspective, we should perhaps attribute Taiwan’s current level of democracy to American pressure and assistance. On the other hand, it is undeniable that the US also exerted pressure and provided assistance to the economic and political reforms taking place in China. Despite their similar Chinese political culture, 40 years on, the polities of China and Taiwan differ quite dramatically. Consequently, the free and open elections taking place in Taiwan today provide the solid evidence that shames Beijing’s stubborn authoritarianism.

Do the Chinese people feel the same resentment toward Taiwan’s elections as their government? This author does not agree with the assumption that there is a huge gap between the opinion of the Beijing government and its people.  China’s propaganda agency could not produce a fantasy that did not already exist; it directs public opinion rather than creating it. Thus we can infer that the Chinese people do not like the elections in Taiwan, and the TAO as the government’s mouthpiece is simply reflecting and reinforcing this attitude.

But why is this? Democracy theory predicts that the rise of the middle class would bring political pressure to bear on the closed system. So who are the middle class in China and where is the pressure? Why do Chinese people dislike freedom of speech, government by the people, checks and balances, judicial independence, and mass elections to choose who should lead them? In order to answer such questions, this author has closely read the TAO’s response to each of Taiwan’s elections over the past 10 years. Through this reading, three main observations can be made.

The first observation comes from the TAO’s responses in relation to election results which were favourable to Beijing. In 2008, 2010 and 2018, when the pro-China party KMT won the election, the Taiwan Affairs Office hid its pleasure with a short statement which simply announced: ‘Cross-Strait relations brought benefits for all. And we will improve peaceful Cross-Strait relations’. In 2012, the successful re-election of the pro-China President Ma Ying-jeou cheered TAO, which subsequently stated: ‘We work together with Taiwan to fight Taiwan’s independence, support the 92 Consensus and create the rejuvenation of the Chinese nation’.

China is always careful when the result of Taiwan’s elections suits its interests. Why should this be? It is a somewhat sad fact, but China knows it is not welcome in Taiwan. This understanding hurts the feelings of both the government in Beijing and the Chinese people.

The second observation relates to the other kind of result. Ma lost his political clout in the 2014 mid-term election. Showing its disappointment, the TAO issued a short statement of just 51 words which included a very mild warning: ‘We hope the Taiwanese people cherish the achievement of Cross-Strait relations so far’.

In January 2016, the Taiwanese people voted for the Democratic Progressive Party (DPP) and a new president, Tsai Ing-wen, who does not agree with the 92 Consensus or the One China Policy. After years of ‘giving away of interests’ (讓利), Beijing was puzzled and angered by this change of heart by the Taiwanese. The TAO produced an unprecedented 300-word response which reaffirmed Beijing’s stance. The speaker was calm and peaceful. There was no criticism, no complaint, and no threat. The most important remark appeared to be one of Beijing reassuring itself: ‘We will not change because of the result of the election’.

Beijing’s response is therefore even more careful and reserved in regard to unfavourable results. Why is this? It is because the government does not want to be seen as a failure when it comes to dealing with the issue of Taiwan. The process of working hard to please Taiwan along with repeated frustration merely strengthens China’s feeling of resentment.

The third observation is that the government in Beijing tends to pretend it does not care about Taiwan’s elections. The TAO is the chief government agency for dealing with the issue of Taiwan. The elections go to the heart of Taiwanese affairs, they are an indicator of Cross-Strait relations, and they represent the final test of the TAO. However, compared to any other issues, TAO’s comments on the elections in Taiwan are usually brief. When making statements, the comments begin with: ‘We noticed that…’ (我們注意到…). In the context of China, such a tone is very passive. Hence this controversial reluctance to react to Taiwan’s elections indicates Beijing’s overall mixture of frustration and resentment.

In sum, these three observations offer us a hint as to how to understand the true feelings of the Chinese people and their government regarding the elections in Taiwan and democracy in general.

Democracy is surely an ideal prospect for the Chinese. The CCP has pledged to bring prosperity and progress to the people, but for now, the priority is political reform rather than democratization. China has a plan for how to reach its destination. It is a good thing that Taiwan already enjoys wealth and political freedom, but it is not good if Taiwan’s democracy fosters a snobbish attitude towards China, which is perceived to be behind the times.

For China, the worst thing about Taiwan’s elections is that their main purpose is not to experiment with democracy for all Chinese people, but for Taiwan to keep its distance from China. In the end, for Beijing and the Chinese people, their frustration and disappointment displaces their jealousy and passion about Taiwan, its elections and its democracy. With regard to the elections in Taiwan, and showing their true colours, the Chinese have always chosen to react with criticism, sarcasm, indifference or silence.