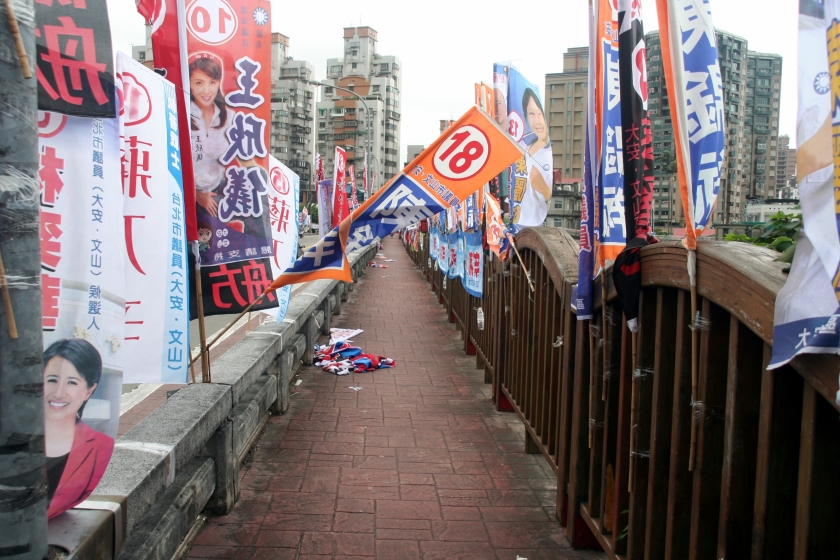 Taiwan’s 2020 presidential election looks to be a far more conventional fight than first expected. Over the summer there was much speculation: Would Taipei Mayor Ko Wen-je stand for election? Would Foxconn billionaire Terry Gou run as an independent? If not, would he take up the People First Party (PFP) ticket? There was even rumblings about whether or not the New Power Party (NPP) would field their own candidate – a move which would have been the reverse of their 2016 decision to back Tsai Ing-wen. None of these possibilities have manifested.

The only real shocker was the entry of former Vice-President Annette Lu. Yet, judging from recent polls, even this surprise announcement has not substantially shaken up things. The race to become Taiwan’s next president remains a straight-up fight between the Democratic Progressive Party (DPP) and the Kuomintang (KMT).

A Green Party Taiwan (GPT) poll early this month showed President Tsai commanding a substantial lead over her KMT rival, Kaohsiung Mayor Han Kuo-yu, in a head-to-head race. Although the eighteen point advantage to Tsai and the DPP is strikingly large, it does fit in with general polling trends over the past few months showing Mayor Han’s slumping popularity. This same survey also asked respondents how they would vote in the island-wide party ballot for the country’s Legislative Yuan. Here the DPP lead crumbled with only 25% voting for the governing party, while 35% for the KMT. More interestingly, 12% said they supported Mayor Ko’s new Taiwan People’s Party (TPP) while 8% supported the NPP. Other smaller parties, including the GPT, PFP, and Taiwan Statebuilding Party, all garnered fewer than three percentage points. These factors could make the the Legislative Yuan contest much more interesting than the presidential.

Of course, the importance of roughly one-quarter of the population backing smaller parties should not be overstated. Those parties failing to secure more than five percent of the vote will not be entitled to any seats from the island-wide ballot. Moreover, this proportional element of the legislative elections only accounts for 34 out of 113 seats in the chamber.

This was why the NPP breakthrough in 2016, albeit limited, was such a success. Not only did the new party secure two party-list seats, but more remarkably it gained three representatives in geographic constituencies. These gains established the NPP as Taiwan’s third political force. Since then, a series of resignations, scandal and factional in-fighting has seen the NPP’s caucus in the Legislative Yuan collapse. The party risks turning into a spent force come January.

What factors could determine the success of the NPP and TPP? Some lessons can be learnt from the last legislative elections. A large part of the NPP’s success in 2016 stemmed from their electoral pact with the DPP in the geographic constituencies. In return for the NPP endorsing Tsai for president, the DPP did not stand candidates in three KMT-held seats targeted by the NPP. Although NPP candidates were successful against the KMT, they could not have fought both major parties. If the party hopes to retain and expand their number of geographic seats in January, it will need to make similar arrangements. The TPP, however, are positioning themselves in opposition to both the KMT and the DPP and will find this sort of pact difficult to make.

Creating a salient and popular political project is another challenge for these new parties. When changes in society are not reflected by the existing parties, a political re-alignment is necessary. However, the NPP’s pool of potential supporters appears as small as it was before, without a great acceleration in Taiwanese self-identification and stagnant support for independence. Moreover, while concerns about cross-Strait economic dependency clearly led to voters punishing the KMT in 2016, by 2018 the party was able to romp home, including in DPP-stronghold Kaohsiung where Han won despite promising to promote more trade with China.

The 2018 election results show that Taiwan essentially remains a two-party system in which voters will switch between the DPP and the KMT to punish the incumbent’s unpopular policies. Taiwanese politics is largely a Green-Blue affair wherein parties and politicians are forced to take a side on the issues which matter most to voters, namely identity and the island’s status. Yet the TPP have insisted they want to ignore Taiwan’s main social-cleavage and focus on “improving governance”. If you do not have anything to say on the topic of the day, do not be surprised if voters snub you in the voting booth.

Raising funds and selecting candidates is the third challenge for smaller parties. Ko appears to have successfully secured for the TPP a “mother hen” figure in the form of Taiwan’s richest man, Gou, for the 2020 race. Ko has also built a popular following during both his independent runs for Taipei Mayor. Gou too has his own fans and was able to secure 28% of the vote in this summer’s KMT presidential primary. Furthermore, over the course of this year both Ko and Gou’s levels of support in presidential polls hovered in the mid-twenties. These factors suggest they have a sizeable base of support to mobilise for TPP candidates.

The NPP face greater difficulties this time with candidates and leadership. In 2016 the NPP had a clear spending advantage over its fellow ‘third force’ challenger, the GPT-Social Democratic Party alliance, and the star appeal of their three geographic constituency candidates was widely cited as a source of their success. Huang Kuo-chang, who played a prominent role in the Sunflower movement, is no longer the party’s leader and rumours have circulated that he may not even run for re-election. Meanwhile, their winning candidate in Taichung and White Shirt army protest activist, Hung Tzu-yung, has quit the party and will stand as an independent. So too will Freddy Lim, a human rights activist-cum-legislator, whose star appeal derives from him literally being a rock star. Without similar levels of talent, the NPP’s prospects in constituency races look bleak.

The response of the DPP and KMT to minor party projects is the final pitfall for Taiwan’s third force hopefuls. Back in 2016, the DPP’s promotion of candidates with social movement backgrounds was seen as a successful attempt to dampen the NPP’s appeal, and the recent appointment of Sunflower leader Lin Fei-fan as DPP Deputy General Secretary could have a similar effect. Such moves are largely beyond smaller party control. If the major parties play it smart over the next three months, they could make the NPP and TPP all but irrelevant.

The NPP has a salient political project, even if its appeal is limited. The 2016 election results show that if the NPP closely coordinates with the DPP, it can overcome the barriers of the electoral system. However, failing to do so would jeopardise the party’s longevity, as has their inability to hold onto star candidates. The TPP has the stars and the cash, but without a salient, popular and distinctive political project it is difficult to see how it intends to reshape Taiwanese politics. Nevertheless, the TPP could usurp the NPP as the island’s third force in the Legislative Yuan.

Gray Sergeant studied his Master’s in Chinese Politics at the School of Oriental and African Studies, and is now at National Taiwan University (NTU) on a Huayu Enrichment Scholarship.