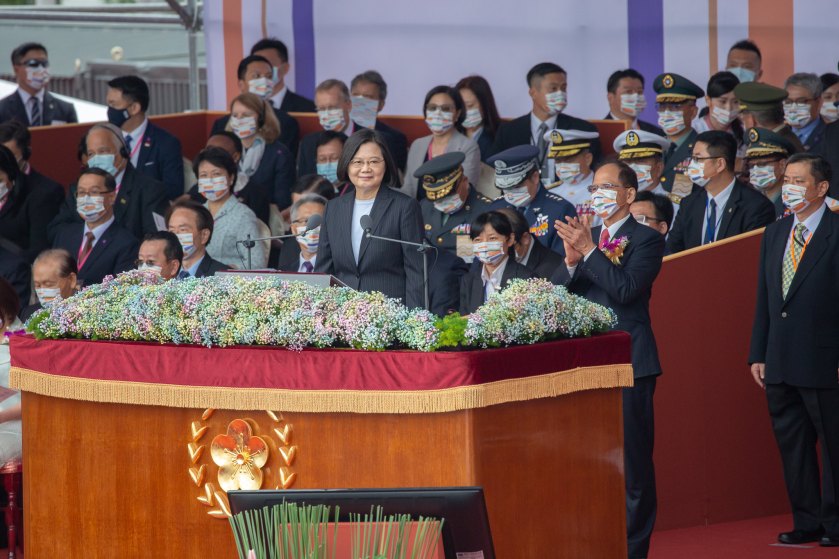 Written by Joshua Bernard B. Espeña.

China’s aggressive rise for regional dominance continues to upset the rules-based order. The United States, together with Japan, Australia, and India are seeking to balance the power through the Quadrilateral Security Dialogue (Quad). The Quad met in a face-to-face meeting this October in Tokyo and discussed their common interest to uphold a free and open Indo-Pacific.

Meanwhile, there is increasing fear in Taiwan over China’s hardening stance to reunify with the island-nation by force. This fear stimulated Taiwan to become more defensive. Taiwanese President, Tsai Ing-Wen, reiterated in her National Day 2020 statement that the nation stands ready to defend its interests. Not only through investment in defence capabilities and military preparedness, but also by playing an active role in establishing alliances based on shared values with like-minded nations.

Tsai is, therefore, cognisant about the Quad’s role in the region, describing that “countries in the region have forged alliances to ensure that their national security and democratic systems are not affected by external influence.”  Thus, such statements signal Taiwan’s bet for the Quad.

The Quad’s prospect of becoming an increasingly anti-China network remains as US State Secretary Mike Pompeo hints in an interview the prospect of institutionalising the Quad through more regularised informal dialogues and consultations on matters of common interest.

Hypes and hopes for the Quad’s recognition of Taiwan are present as a way to counter Chinese revisionist behaviour. However, this prospect remains unlikely because the Quad members restrain themselves from doing so due to domestic and foreign policy considerations. Hence, if Taiwan hopes to lever the Quad for its interests, it should firstly advocate the Quad members’ policy on its politico-diplomatic status.

Only fifteen countries recognise Taiwan as a sovereign Chinese state. In 2019, the Solomon Islands and Kiribati became the latest countries to switch diplomatic relations from Taipei to Beijing. China has increasingly gone to great lengths in isolating and constraining  Taiwan’s regional and global influence, including membership in the World Health Organisation to contribute efforts against the COVID-19 pandemic.

As I have argued elsewhere, the 1992 Consensus, or the One China Principle, between Taipei and Beijing ensures demarcation of boundaries within which Taiwan can operate without raising the threat of military action from China. It thus mitigates the prospect of Taiwan’s domestic politics provoking Beijing. Nevertheless, it no longer enjoys a premium for peaceful cooperation between them due to changes in the geopolitical environment, frictions under the current leadership of Tsai and Xi Jinping, and a growing sense of nationalism in China and self-identification in Taiwan.

In the US, Pompeo regards that the US wants peace in the Cross-Strait but not necessarily in the form of appeasement. Washington has sent its Health Secretary and State Undersecretary for Economic Affairs to Taipei to signal its support to Taiwan’s role in the region. US President Donald Trump has also signed congressional bills this year to provide political and military support to Taiwan.

While all these actions spell support to defend Taiwanese existence, it is not necessarily synonymous with supporting statehood. Debates continue over current US-Taiwan policy; namely,  strategic ambiguity versus strategic clarity being the foundation of regional peace and stability. Furthermore, even if strategic clarity prevails, the mother policy resides in the Taiwan Relations Act, which accounts for recognising One China Policy. Furthermore, the upcoming US 2020 elections make the quality of support for Taiwan makes even more volatile.

There is a growing Indian popular and elite support for Taiwan amid an aggravating Indian mistrust to deal with China. A call to ignore – if not abandon – India’s One China policy is now present. There is also a present reciprocal Taiwanese view to upgrade Taiwan-Indian relations. However, there seems to be no actual footstep headed towards an Indian diplomatic recognition of Taiwan since it remains calm to give in to pressure.

Japan, under the former Prime Minister Shinzo Abe, has called to align with the Quad members since 2007, and only came into hiatus back in 2017 amid a growing Chinese assertiveness. Under the new Yoshihide Suga administration, Japan guarantees the continuity of Abe’s foreign policy in the Indo-Pacific. Suga had initially planned to engage Tsai in a phone call, but Tsai told that she had no plans to talk with him. This is also not to mention the enduring territorial disputes between Taiwan, China, and Japan in the Diaoyu/Senkaku Islands as Tsai reiterated her stance there.

As for Australia, its policy remains comfortable in aligning with US policy. This particularly relates to the issue of strategic ambiguity and its awareness that Taiwan keeps international recognition significant. The recent Joint Statement on Australia-US Ministerial Consultations (AUSMIN) 2020 hints that Canberra seeks a strong partnership with Taiwan, albeit an unofficial one as well as supporting Taiwan’s WHO membership, which does not include statehood as a prerequisite.

As language over the Quad members’ diplomatic recognition of Taiwan remains absent, the Quad should at least move over from mere symbolism and head towards clarifying and improving its purpose – an “Asian NATO” or whatever – so that Taiwan can carve a practical step toward supporting the Quad. Moreover, as the Quad further institutionalises in the future, it should also conclude a joint statement at every meeting. What is clear, so far, is that while the Quad members stand for a rules-based order, they do not necessary conflate it with simplistically choosing Taipei over Beijing.

Joshua Bernard B. Espeña is a Manila-based defence analyst and international affairs academic who works and writes on issues regarding the Great Power Politics of the Indo-Pacific, Philippine Strategic Culture, and ASEAN Studies. He is currently pursuing his master’s degree at the University of the Philippines, Diliman.