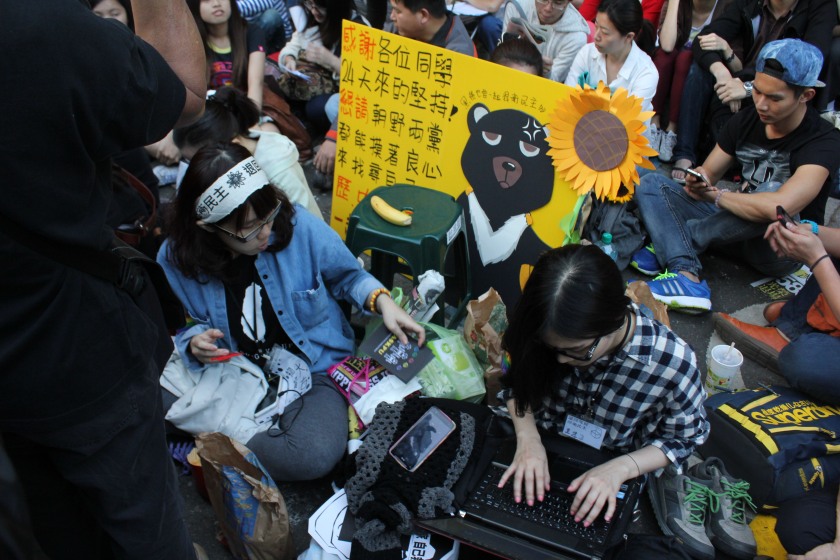 Eight years is, in many ways, an awkward amount of time for a social movement. A social movement at eight years has not acquired the grandeur of a tenth anniversary. But the effects of that social movement, if it had any, should have already been felt by that point.

This is certainly the case with the Sunflower Movement, which will soon reach its eighth anniversary this year.

It is hard to deny the impact of the Sunflower Movement. Some credit Tsai Ing-wen’s 2016 election victory to the movement, seeing as Tsai positioned herself as the preferred candidate of the young people active in the movement. In election ads and political statements, Tsai signalled support for the causes that progressive youth activists championed, including opposition to closer relations with China, support of gay marriage, animal protection, and the view of Taiwan as a diverse, pluralistic society.

Likewise, the 2016 elections and subsequent elections saw the entrance into politics of a generation of young politicians and the rise of the “Third Force,” consisting of pan-Green parties that publicly depicted themselves as neither being DPP nor KMT. Many of these politicians had been active participants in the Sunflower Movement, running after becoming publicly known for their activism during the movement.

More broadly, there was a great deal of focus on young people after the Sunflower Movement. While young people had previously been criticised as a soft and weak “Strawberry Generation” that was unlike their Boomer parents, after the movement, the view shifted to seeing young people as willing to shoulder significant risks for the sake of what they believed in.

To this extent, verdicts on the movement have shifted several times. The movement was largely viewed as a failure before 2016, with the movement seen as having failed to accomplish its demands. After Tsai Ing-wen’s 2016 election victory, this led to a more positive appraisal of the movement. Views of the movement again shifted after the DPP’s losses in 2018, with the pan-Green camp’s 2016 gains seen as perhaps transitory. But now, few would see the movement as having been a failure.

As such, it may not be surprising to note that just as the meaning of the movement also remains subject to redefinition. That is, what the movement was ultimately about is still debatable.

Few would question that the movement was a direct reaction to the KMT’s attempts to pass the CSSTA, a trade agreement that would have allowed for Chinese investment in Taiwan’s service sector industry. Nevertheless, another source of outrage was how the CSSTA was passed, seeing as the legislative committee review process was ignored and committee head, Chang Ching-chung, reportedly announced that the bill had been passed with a megaphone while hiding in a bathroom. This led to criticisms of the passage of the CSSTA as a “black box,” lacking transparency and oversight.

As such, it was appropriate to speak of three different layers of opposition to the CSSTA during the movement. Some opposed the CSSTA because it was a trade deal to be signed with China, with concerns about the effects on freedoms of speech in Taiwan from allowing Chinese investment in the service sector industry. Taiwan had already seen a chilling effect on the media due to the purchase of the China Times and CtiTV by pro-China business tycoon Tsai Eng-meng.

On the other hand, there were those that may not have necessarily opposed the CSSTA but opposed the bill because of how it had been passed. For some, this raised the spectre of resurgent authoritarianism if the KMT was willing to circumvent the legislature and push the CSSTA through using executive power, in light of the KMT’s history as the former authoritarian party in Taiwan.

Eight years later, the movement is primarily remembered in terms of the anti-China frame, with the movement viewed as having opposed the CSSTA because it was a trade deal with China. In some ways, the second frame–of the “black box” and lacking oversight measures–merged into this frame in the historical remembrance of the movement, probably in line with views of the KMT as simply being China’s proxy in Taiwan. This likely returns to how the defining political cleavage in Taiwanese politics has long been the issue of independence versus unification.

If the historical remembrance of the movement has now lost fine detail and is now remembered in terms of the broader frames that have traditionally defined politics, this, in turn, raises the question of whether Taiwanese politics is now in a “post-Sunflower” period, with the direct effects of the movement less felt.

One notes that some of the political actors that emerged directly in the wake of the Sunflower Movement have now receded. For example, the New Power Party, originally the only of the “Third Force” parties that were successful in securing seats in the legislature in the 2016 elections, has suffered mass departures from the party in the years since and has a weaker presence in the legislature or at other levels of government.

This primarily took place because of unresolved contestation within the party about whether to openly endorse Tsai Ing-wen in the 2020 elections or not. Nevertheless, the project of the “Third Force” to create a political force independent of the DPP and KMT has clearly stalled, with key Sunflower Movement student leaders such as Lin Fei-fan joining the DPP and the light Blue TPP also trying to claim the mantle of the “Third Force.” Moreover, most major organisations that emerged from the Sunflower Movement are no longer active, including Democracy Tautin, Democracy Kuroshio, with Democracy Tautin eventually merging with Youth Against Oppression to form Democracy Renovation.

While some young politicians’ political careers have since stalled, others have emerged to take their place. Although some of the younger politicians that emerged after the Sunflower Movement do not try to play up involvement in the movement or may not have been directly involved, they broadly continue to frame themselves along the lines of the youth politicians that emerged directly after the movement. Both the KMT and DPP also continue to try and appear as parties that have the support of young people.

Certainly, some of the discursive effects of the Sunflower Movement have faded, even if they were always hard to quantify. However, it is a harder question as to whether the direct influence of the movement has faded to the extent that the present would be seen as post-Sunflower. This perhaps will only become clearer after future anniversaries.