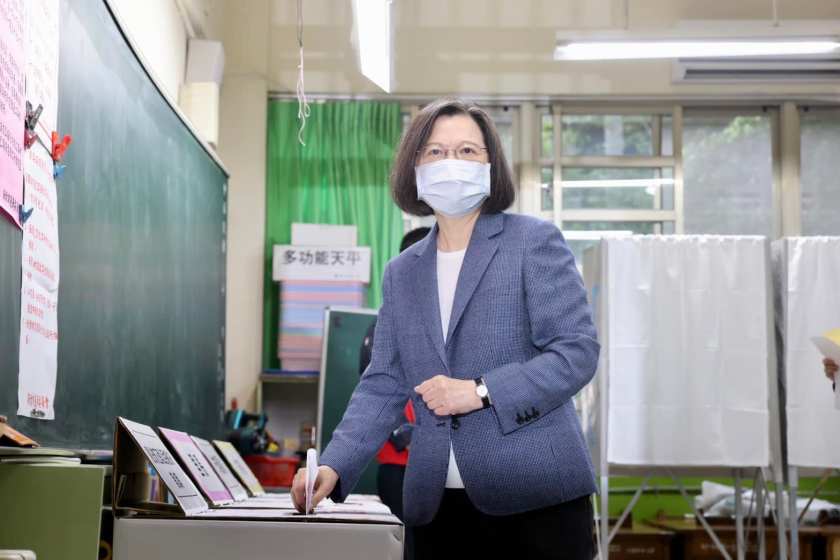 The results of nine-in-one elections the past weekend prove reminiscent of 2018, in which the KMT surprised with unexpected gains after the crushing defeat it faced in 2016. This was particularly the case given that the KMT captured the traditional DPP stronghold of Kaohsiung as part of the “Han wave” phenomenon.

As with 2018, to take responsibility for Saturday’s defeats, Tsai once again resigned as party chair of the DPP. In 2018, this opened up the path for William Lai to contest her for the 2020 presidential nomination. Although Tsai will not be running again, her resignation as chair creates a power vacuum in the DPP, likely affecting the DPP’s choice of a future presidential candidate in 2024. Tsai’s ability to influence the DPP’s choice of its next presidential candidate will take a blow in light of the election outcome.

More generally, the DPP lost control of traditional pan-blue territories that it had flipped in the past decade. This includes Taoyuan, Keelung, and Hsinchu. The DPP has lost much of the ground it gained in making inroads into traditional pan-blue territories, with the DPP winning the lowest number of Taiwan’s municipalities it has in 36 years, down from the previous record set in 2018.

So is 2022 simply 2018 redux? The largest difference between the two years may have been the absence of the “Han wave” in that the KMT had no candidates with a widespread populist appeal to organize its campaign. Even as New Taipei mayor Hou You-yi won reelection by large margins and is touted as a potential frontrunner for the KMT’s 2024 presidential nomination, he has no mass following in the manner of Han Kuo-yu. Hou largely tried to avoid direct shots at the DPP while campaigning, suggesting that he may try to present himself as a moderate, “light blue” candidate instead of leaning heavily into pan-blue nationalism in the manner of Han Kuo-yu.

To this extent, in 2018, the KMT was able to leverage the referendum on issues ranging from nuclear energy to gay marriage as a means to rally its base. The KMT was able to use the referendum to mobilize its base, with the view that their worldview was under threat through the DPP’s actions, such as that the legalization of gay marriage would destroy the bedrock of the family in the institution marriage or that nuclear energy was necessary for Taiwan’s energy needs. Indeed, one notes that the KMT’s angles of attack on the DPP during the 2022 election were primarily over its record on COVID-19, the Tsai administration’s lifting of bans on food imports from Fukushima and ractopamine-treated pork—mainly older political issues, rather than anything new.

The KMT could not replicate 2018’s successes this year vis-a-vis the referendum since the only issue being voted upon was lowering the voting age. This is an issue that both parties nominally support, though the KMT was accused of failing to substantively back the referendum. Namely, adding more young voters to the electorate would benefit the DPP more than the KMT, given the KMT’s low support among young people, as a result of which the KMT previously suggested holding the referendum separately from elections. It was thought that the KMT proposed this to lower the odds that the referendum meeting benchmarks would be binding.

The DPP has historically been weaker when it came to local politics compared to the KMT, as a result of which the DPP’s comparative weakness in nine-in-one elections does not surprise. Namely, KMT’s mobilization and patronage networks extend deep into local areas in Taiwan, going back to the authoritarian era. Consequently, the DPP has always faced disadvantages when it came to extending its influence at the city and county council levels. Moreover, although the DPP performs better when it comes to legislative elections, it also bears remembering that in the course of Taiwan’s democratic transition, the DPP only held the majority in the legislature for the first time in 2016.

At the same time, one notes that voters seem to have been punishing the DPP over largely the same issues that they punished it for in 2018. For example, voters are concerned about what they see as a stagnating economy, as well as about Taiwan’s long-standing demographic woes, with an ageing population, declining birthrate, unaffordable housing, and insufficient opportunities for young people.

Another major factor in the DPP’s losses may have been its inability to manage scandals. A thesis plagiarism scandal that led to the withdrawal of the DPP’s Taoyuan mayoral candidate, former Hsinchu mayor Lin Chih-chien, is thought to have cost the DPP its ability to maintain control of Taoyuan. That the DPP initially defended Lin and put the party’s reputation on the line to do so may have also affected its performance in the Hsinchu mayoral race. However, one notes that the victor, Ann Kao of the TPP, also faced plagiarism charges.

Late in the race, the DPP tried to focus fire on the pan-Blue camp’s issues with corruption. Kao in Hsinchu, for example, came under scrutiny over accusations of embezzling fees for legislative assistants. KMT county magistrate Lin Zi-miao of Yilan has been under investigation over land deals on lots that were originally protected land for much of the past year. Likewise, KMT county magistrate Hsu Chen-wei and her husband Fu Kun-chi have long been accused of corruption, including allegations of buying votes in the KMT’s central committee election.

But attempts to foreground the pan-blue camp’s issues with corruption were apparently unsuccessful, never becoming focused on to the same extent as the thesis plagiarism scandal. One notes how other parties avoided similar scandals affecting their campaigns as a whole, such as how TPP legislator Tsai Pi-ru quickly resigned over plagiarism accusations to avoid affecting the rest of the party. This seemed to have been successful, with the TPP as a whole not coming under fire for plagiarism and Kao winning despite similar accusations against her.

Perhaps the DPP would have performed better with a more coordinated campaign strategy, which could then deal with contingencies quickly. Yet, just as the KMT did not have any core set of issues to mobilize around, the DPP did not try to make the election into one about any specific issue, and it only began to mobilize around issues such as the referendum late in the election cycle. This may have been a tactical mistake, contributing to the election outcome.

This article was published as part of a special issue on “2022 Local Elections.”