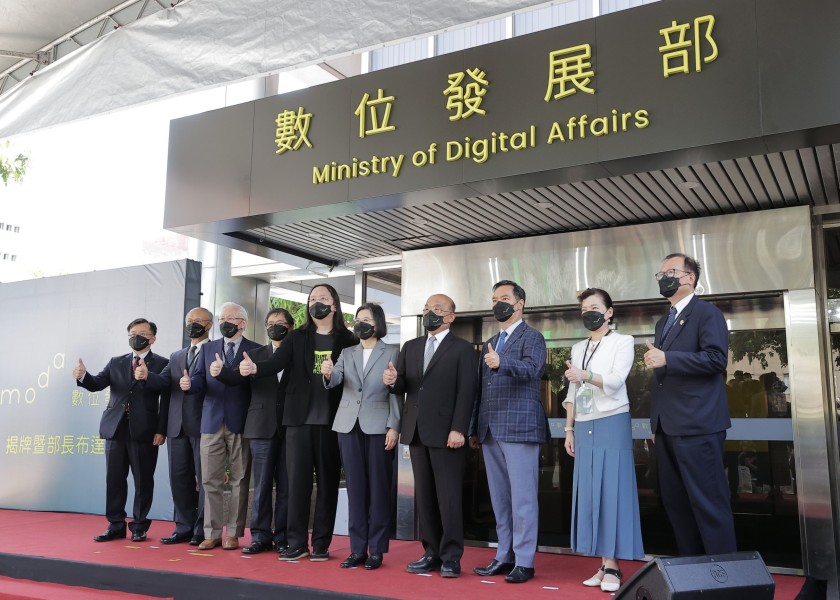 In Taiwan, 2022 will probably be most remembered for the local elections in November and Nancy Pelosi’s visit to the country in August. Although these two events can provide a useful metric for Taiwan’s major domestic and international developments last year, many notable events went somewhat under the radar, at least in English-language coverage. When we shifted our focus to Taiwan’s digital politics, 2022 was a year of many significant events and developments that deserve reflection to understand developments that are likely to take place in the future.

Perhaps the most significant event that took place was the establishment of Taiwan’s Ministry of Digital Affairs (MoDA) on August 27th. Audrey Tang, who had previously served as minister without portfolio and head of the Public Digital Innovation Space (PDIS), became Taiwan’s first head of the new ministry. Before the establishment of the ministry, civil society groups in Taiwan had complained about the lack of transparency and clarity regarding the function of the new ministry. Despite Audrey Tang’s personal brand being closely tied to ideas of openness and collaboration, there were few clear indications or statements regarding the ministry’s role, remit, and relation to other government bodies. For example, Taiwan’s National Communications Council (NCC) was previously the primary body proposing digital regulations. When asked about the relationship between the two agencies, Tang explained the NCC as “the breaks” and MoDA as the “accelerator” for digital innovation in Taiwan. The boundaries remain unclear.

Following the establishment of the Ministry, Tang’s public narrative quickly changed from a focus on innovation and collaboration to a new interest in resilience. Early public statements from the ministry and Tang highlighted the ministry’s aims to secure Taiwan’s internet access in the event of war by establishing a new satellite and increasing rural internet access. Improving Taiwan’s resilience towards cyber warfare also emerged as a key theme for the ministry. It is hard to measure progress at this point, but as many reports have noted, the ministry has had difficulty employing talent to fill positions in its Administration of Cyber Security.

Recent data breaches in Taiwan have also highlighted the difficulty of increasing Taiwan’s overall cybersecurity. In December, Legislator Chiu Hsien-Chih revealed that the personal data of over 23 million Taiwanese people (effectively the entire population of Taiwan) had been leaked online. This data seems to have come from Taiwan’s household registration system. When the leak was first revealed in October, Taiwan’s interior ministry denied any wrongdoing or that the data came from their database. After investigation, the ministry claimed they could find no record of any breaches or anomalies in their system. Cyber security experts at the time suggested that the fault likely occurred when data was shared between different government offices. Leaks have continued to occur in early 2023, pointing to a larger issue. Securing data security will require much greater collaboration between departments and more stringent guidelines on managing data. It is yet to be seen whether MoDA will be in a position to promote this kind of change.

Another security question emerged surrounding TikTok (known in Chinese as Douyin), a popular social media app owned by the Chinese Company ByteDance, in Taiwan. “ByteDance Taiwan Joint Stock Company” was established in Taiwan in November 2022, but the company did not disclose any connection to China or Chinese funding. All companies in Taiwan with links to China must reveal these links. This prompted an investigation into the company. At the same time, Taiwan’s cabinet suggested banning TikTok for all government workers. As a result, many politicians and privacy experts in Taiwan became increasingly vocal in their criticism of their app and their concerns that the app might be tracking Taiwanese TikTok users.

With regard to this issue, Audrey Tang expressed that “societal consensus” would be needed before a ban could be put in place. Exactly what this means, or what kind of public input Tang expects on the process, is still unclear. It is relatively unusual for questions of security to be decided by the public instead of experts. Tang’s statement is perhaps most interesting in that it reflects the tension between her previous role as a very public promoter of dialogue, exchange, and participation, to her current role as head of a ministry in charge of proposing (potentially restrictive) legislation.

Outside of MoDA, one of the most significant digital policy issues surrounding the regulation of social media platforms in Taiwan. The National Communications Council proposed and quickly rescinded the Digital Intermediary Services Act in June 2022. The proposed bill was meant to tackle disinformation by creating new mechanisms for citizens to report content on social media platforms and for government offices to investigate this content. The bill was met with widespread backlash from civil society and many political parties for various reasons. Many criticized the amount of authority that would have been granted to government ministries to determine the validity of the information. Pan-blue figures also expressed concern that the new regulatory body that would have been established would have been used to create a partisan-biased internet in Taiwan by disproportionately targeting pan-blue content. The NCC will likely revise the proposal and suggest a new approach in 2023 or in the future. Similar regulation already exists within the European Union. Although the NCC had tried to copy the EU’s rules, their initial proposal had the potential to create a comparatively more centralized system of moderation.

As the first full year of Taiwan’s Digital Ministry and as the year before a presidential election, 2023 is likely to be another important year for digital policy in Taiwan. 2023 will also be the penultimate year of Taiwan’s current open government action plan. The plan promises greater transparency and participation in digital government in Taiwan. Taiwan is often held up as a hotbed of digital democratic innovation, and those who hope Taiwan can live up to this reputation. At the same time, it will be important to see how and whether MoDA, the NCC and other government agencies try to tackle disinformation and cyber warfare in the new year and what real progress can be made on these fronts. Much of the most important change is likely to be incremental and thus not necessarily headline news, but it will be important to follow these issues in the new year to see whether Taiwan can make progress towards having an internet space that is at once free, secure, and safe.

Sam Robbins is a writer on the intersections of digital tech, media, and politics in Taiwan. He is an editor for Taiwan Insight and TaiwanPlus, and a participant in Taiwan’s g0v community. You can find him on twitter here.