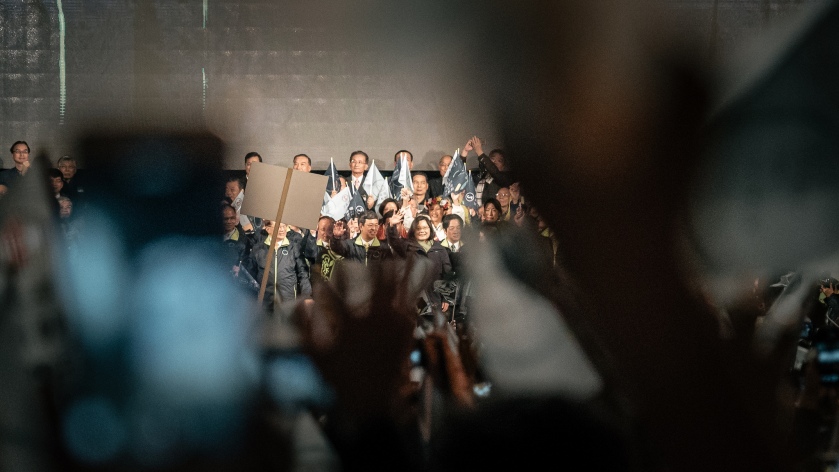 On November 24, Taiwan voters will go to the polls to elect over 11,000 local officials for nine different kinds of offices, from the mayor of Taipei all the way down to village and ward chiefs. Much is at stake. In addition to deciding who will run all of Taiwan’s local governments for the next four years, these elections also serve as a kind of midterm evaluation for the ruling Democratic Progressive Party (DPP), which won unprecedented victories in 2014 and 2016 but is fighting an uphill battle this time around. The severity of the DPP’s losses will be read as a barometer of President Tsai Ing-wen’s chances of reelection in 2020 and could determine whether she will remain as DPP chairwoman.

The results will also indicate whether the opposition Kuomintang (KMT) is on the road toward recovery or is instead in terminal decline, and they will be a moment of truth for smaller parties seeking to expand their support and demonstrate staying power in Taiwanese politics—none more so than the youth-oriented New Power Party (NPP), which is running council candidates across the island for the first time. They also offer voters an unprecedented chance to use the power of referendums to decide public policy questions.

So, as the election returns roll in on election night, here are five key questions to keep in mind.

First: Can the DPP Hold On in the Special Municipalities?

Of the six special municipalities in Taiwan, four (Taoyuan, Taichung, Tainan, and Kaohsiung) are currently led by DPP mayors, one (New Taipei) by a KMT mayor, and one (Taipei) by an independent, the inimitable Ko Wen-je. Polls from across the political spectrum have suggested the DPP candidates remain favored in the DPP heartland of Tainan and in Taoyuan, where the current mayor Cheng Wen-tsan pulled off the upset of the night in 2014, and has since maintained high approval ratings.

On the other hand, DPP candidate Su Tseng-chang is a clear underdog in New Taipei, and in Taipei, the party’s decision to nominate Pasuya Yao instead of supporting Mayor Ko again looks like it will backfire: Ko remains broadly popular, and if he wins re-election in a three-way race over both the DPP and KMT candidates, he will be well-positioned to challenge Tsai Ing-wen for the presidency in 2020. Adding to its challenges, DPP candidates are in competitive races in Taichung and Kaohsiung, both of which the ruling party won decisively four years ago.

Much of the election narrative will be shaped by how these six contests go. If the DPP can just hold on to the four special municipalities it now runs, that would a good night. Lose one of the two toss-ups, and President Tsai can still probably remain as party leader, depending on how the other county-level races turn out. But lose both, and she will be under intense pressure to resign as chairwoman (and perhaps to force the premier, William Lai, to step down, too)—an outcome that would leave her politically weakened. Coupled with a resounding victory for Ko in Taipei, DPP defeats in both Taichung and in Kaohsiung would be quite ominous for Tsai’s prospects in 2020.

Second: Can the KMT Finally Get Its Act Together Again?

The KMT is coming off two consecutive election disasters. It held power nearly everywhere as late as 2012, but it lost control of most of the key local governments in 2014, then got crushed in national elections in 2016. With President Tsai and the DPP now struggling with low public approval ratings, the party has been handed a golden opportunity for a comeback after more than two years in the political wilderness. To their credit, KMT candidates have managed to run competitive campaigns in most races this cycle, even in traditional DPP strongholds such as Yilan County and Kaohsiung.

Yet the KMT is struggling once again with an old bugaboo: renegade candidates. After heated intra-party contests, the party has closed ranks behind its official nominees in Taichung, Taipei, and New Taipei. But in other races it has suffered embarrassing defections: former KMT members are running independent campaigns in Chiayi City, Hsinchu County, Taitung County, Kinmen, and Taoyuan, which could split the pan-blue vote and cost the KMT several wins. If KMT candidates also fall short in the marquee races in Taipei, Taichung, and Kaohsiung, current chairman Wu Den-yi will probably have to resign, igniting yet another period of internecine warfare between the party’s various factions and dimming its already uncertain prospects for 2020. An upset loss in New Taipei, the only special municipality the KMT currently controls, would be even more catastrophic for the party and raise serious questions about its long-term electoral viability.

Third: How Many Councilor Seats Can Third Parties Win?

City and county council seats in Taiwan are still elected via the old single non-transferable vote (SNTV), rather than the single-member district plurality (SMD-P) system used since 2008 for the legislature. SNTV is a more permissive electoral system: candidates can win a seat with much less than half the vote in a district—in some cases, less than 10 percent.

In theory, this system provides openings for new parties that can’t win seats in Legislative Yuan districts. But in practice, small, issue-oriented parties have historically fared poorly in council races, which tend to be very candidate-oriented and turn on name recognition rather than ideological or policy positions. Most council seats in 2014 that did not go to the DPP or KMT, for instance, were won by independents, not third party candidates.

A strong showing in the local council races, then, is a good indicator of long-term viability for new parties trying to break through the current DPP-KMT duopoly, or old ones like the Taiwan Solidarity Union (TSU), the People First Party (PFP), and the New Party (NP) that are hoping to remain politically relevant. The small party with the most to gain (or lose) is the NPP, which burst onto the national political scene in 2016 by winning five seats in the legislature. The NPP has since been a thorn in the side of the DPP, and it has talked a big game about growing into a “third force” in Taiwanese politics and becoming the primary opposition in the legislature. But it needs to rack up wins in council races, especially outside Taipei, for its grand national ambitions to look at all realistic.

Fourth: What Happens if a Referendum Question Actually Passes?

Ever since the original Referendum Act was approved in 2003, the referendum has been the Chekhov’s gun of Taiwanese politics. Then-president Chen Shui-bian put two politically charged questions on the ballot in 2004 as a way to gin up turnout for his reelection, and when he tried the same gimmick in 2008, the KMT followed suit with one of their own. None came close to meeting the high turnout threshold of 50 percent of eligible voters, so few politicians took seriously the legal questions that would arise if one actually passed.

That changed in December 2017, when the DPP-led legislature passed amendments to the Referendum Act that lowered signature and turnout thresholds. Interest groups from across Taiwan’s political spectrum wasted no time trying to put this new political tool to use: dozens of referendum proposals were circulated to collect signatures, and 10 were ultimately certified by the Central Election Commission. These include five competing questions about same-sex marriage and education, three on energy policy, one on changing the official name of Taiwan’s Olympic team, and one on retaining a ban on food imports from Japanese prefectures affected by the Fukushima nuclear disaster.

Despite all the enthusiasm and controversy these proposals have generated, it’s not clear what will happen if some of them actually pass. Although the results are supposed to be legally binding, the Referendum Act does not have a compulsory enforcement clause unless an existing law is repealed. So, most will still require further action by the legislature or executive branch if they are approved. And if one or more of the same-sex marriage questions wins, it may well come into conflict with a Council of Grand Justices ruling from 2016, requiring yet another constitutional interpretation. In sum, don’t expect election night to be the last word on any of these issues.

Fifth: Can Taiwan’s Election Management System Hold Up under Pressure?

Taiwan’s Central Election Commission oversees is one of the best election management systems in the world: it’s low-tech, transparent, accurate, fast and efficient. But the CEC has come under intense political pressure from all sides of the political spectrum this cycle. Its procedures and personnel will be put to an unprecedented test in the elections: voters will receive separate ballots for as many as five different local races, plus the 10 referendum questions. That’s a lot of paper to keep track of.

To make matters more complicated, the Referendum Act amendments lowered the voting age to 18, but for local elections it is still 20. So polling places will now have to have a way to separate out 18-19 year-olds who can only vote on the referendum questions from the rest of voters. Given the added complexity, the CEC is trying to recruit extra poll workers for this election.

Expect results to be reported more slowly than in the past, and let’s hope that everything goes smoothly on election day. The legitimacy of Taiwan’s democracy depends on it!

Kharis Templeman is the Project Manager of the Taiwan Democracy and Security Project in the U.S.-Asia Security Initiative, and a social science research scholar at the Shorenstein Asia-Pacific Research Center (APARC) at Stanford University. Image credit: CC by Studio Incendo/ Flickr.