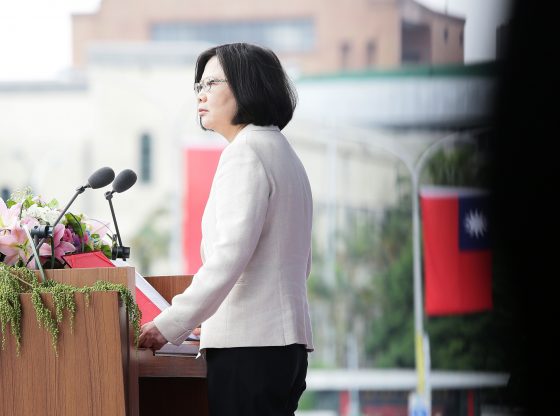 No Taiwan president has an easy job balancing pressure from China on unification with domestic pressures from those who advocate clear statements of independence for Taiwan, as opposed to the Republic of China (ROC), versus those who advocate the eventual unification of the ROC with China under a variety of scenarios. Too cautious for some and overly activist for others, Tsai Ing-wen, the standard bearer of the pro-Taiwan DPP, has made great efforts to find a balance.  On New Year’s Day, Tsai appeared at the annual flag raising ceremony and sang the words to the ROC’s national anthem, which she had avoided doing the year before. After reviewing the accomplishments of the last year of her administration, and in obvious anticipation of an address to be given the next day by her cross-strait counterpart President Xi Jinping, Tsai laid down a policy that attempted to create a new starting point for Taiwan-China relations. Before the two sides could establish a sustainable relationship, Beijing would have to accept certain realities she referred to as the “four musts:”

Tsai asked how credible Chinese claims that both sides of the strait were one family could be if Beijing were not even willing to cooperate in efforts to prevent the current swine fever epidemic, and noted that what she referred to as a flood of disinformation from the other side of the strait had unsettled hearts and minds in Taiwan.

As the probability of peaceful unification continued to recede, using invasion, or at least the imminent threat of invasion seemed a more likely strategy to succeed.

Xi’s rejoinder, delivered at a rally to commemorate the 40thanniversary of the “letter to Taiwan compatriots” did not address Tsai’s points. It did bring to mind the differences between the issuance of the letter and the current situation, in ways that are not favourable to Xi’s stated end goal of peaceful “re”-unification. In 1979, the United States, chief patron of the Republic of China, had just derecognized the ROC’s legitimacy in favour of the People’s Republic of China (PRC). Although the blow to the ROC, now officially referred to as Taiwan’s, morale was devastating, there were good reasons for Beijing not to press its advantage. With President Jimmy Carter facing a firestorm of domestic criticism over normalization, which Carter defended as ensuring peace in Asia, and with Chinese leader Deng Xiaoping knowing that the People’s Liberation Army (PLA) was about to attack Vietnam, belligerence across the strait would have been monumentally foolish. Moreover, since the Chiang dynasty, which also professed to want unification, was still in power in Taiwan, Beijing could hope that some deal could be worked out without resort to force. In any event, with the abject weaknesses of the PLA embarrassingly obvious in its subsequent invasion of Vietnam, the still more difficult task of taking by Taiwan by force would likely have been disastrous.

Four decades later, China is strong, both economically and militarily, both of which enable it to press the issue of unification more forcefully. However, in Taiwan, also more prosperous, democratization brought a new generation to power that indicated it had no interest in surrendering its hard-won civil liberties to be part of a country none had ever been citizens of and few had ever lived in. As the probability of peaceful unification continued to recede, using invasion, or at least the imminent threat of invasion seemed a more likely strategy to succeed.

As if to reinforce the message, Xi addressed a meeting of China’s Central Military Commission on the day after Tsai’s rebuttal, ordering the armed forces to continue strengthening their combat preparedness and make sure they were always ready for battle. The government also released a video of a large gravitational bomb being tested. Still, there was nothing new here either: both Xi and his predecessor, Hu Jintao, had made similar calls. And, according to Western aviation specialists, the weight of the bomb means it can be dropped only from a non-stealthy heavy bomber. Hence it could only be used after the target’s air defence had been taken out, making it unsuitable for a first strike. More worrisome were a Chinese military website’s photos of a training exercise using assault breaker vehicles, since these would be used to destroy Taiwan’s defence against a PLA invasion.

Within hours of Xi’s speech, Tsai issued a rebuttal, stating that she had never, and would never, accept the existence of the so-called 1992 consensus, thereby taking a step beyond the statement she made at the time of her inauguration, when the new president said that she accepted the historical fact of a meeting in 1992. Negotiations, Tsai’s rebuttal continued, were welcome, but only on condition that they be conducted on a government-to-government basis, with no individual or group having the right to represent the people of Taiwan. In this, she received partial support from the opposition KMT. Its official website, while stating that the KMT opposed Taiwan’s independence, denied that the one country, two systems for Taiwan proposed by Xi was the content of the 1992 consensus. Furthermore, it added that it feared that, under “the current stage,” it would be hard for any one country, two systems formula to win support from majority public opinion in Taiwan. The site expressed the hope that cross-strait exchanges would continue in a peaceful manner. Other, non-partisan, sources pointed out that, Xi’s words to the contrary, the 1992 documents said nothing about working together for unification, whether or not one accepts it as a consensus.

At this inopportune moment, however, Tsai faced dissension within her own party. On the same day that Xi made his speech, four elderly DPP stalwarts urged Tsai not to run for re-election though denying that the timing was planned. Blaming the president for the party’s losses in the November elections, the four stated that, from north to south of Taiwan, there were mayors espousing the view that the two sides of the Taiwan Strait are one family and endorsing the so-called 1992 consensus.  Tsai responded by thanking the group for their concerns while vowing that she would never bow to pressure, and that defending Taiwan’s sovereignty and democratic way of life were far more serious matters than her political career. Younger pan-green members then launched an online petition in support of Tsai, and a group of international scholars and former government officials issued an appeal to the people of Taiwan to put aside internecine disputes and unite against Chinese pressure.

Tsai is clearly feeling the pressure. In a gathering with a small group of scholars, she used the phrase 兵臨城下, loosely translated as being under siege. She has appealed for international support, receiving strong endorsements from several members of the U.S. Congress. In an election held on January 6, Cho Jung-tai, considered a protégé of Tsai, was elected the new head of the DPP, garnering nearly 73 per cent of the votes. Whether he can unite Taiwan’s domestic fissures to craft a united front against Beijing’s tactics remains to be seen.