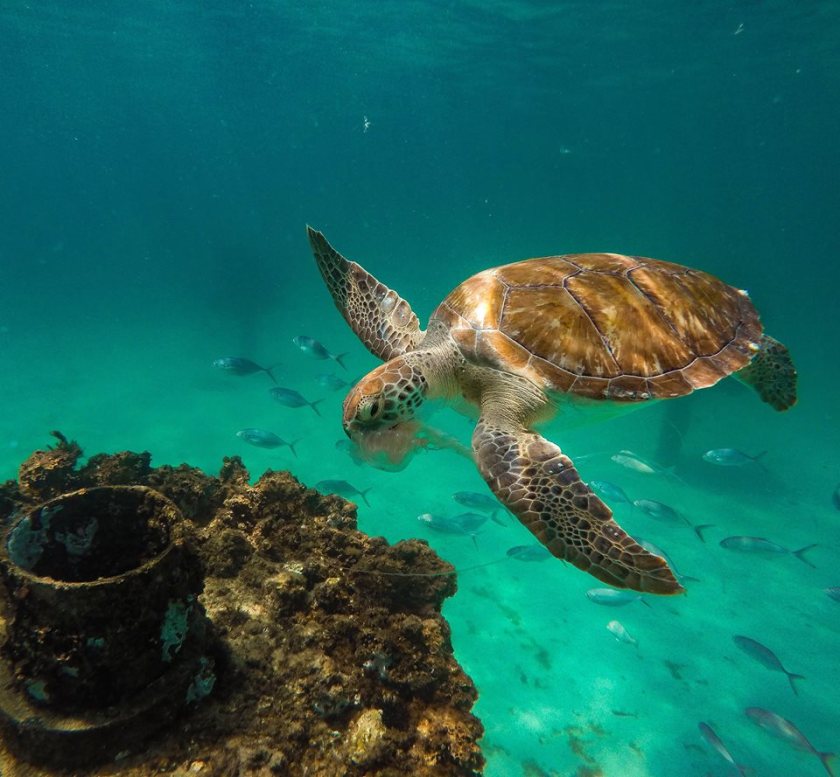 Green Sea Turtles (Chelonia mydas) have long been classified as a globally endangered species due to human disturbances. The turtles are hunted for their meat, eggs, and shells, and their reproduction suffers from the effects of habitat degradation and fragmentation. Artificial light sources hinder the Turtles’ return to land for egg laying and interferes with young hatchlings’ movement towards the sea, thereby increasing their mortality rate. Many conservation measures, such as eco-tourism, have been implemented to protect Green Sea Turtles but not all are successful. Some successful international models of conservation were implemented in Taiwan, but the results were not as positive as expected. We find that the conflict of cultural beliefs regarding Green Sea Turtles and the government’s conservation grants scheme is key to this failure.

Green Sea Turtles are distributed across the northern, eastern, and southern areas of Taiwan, as well as on Lanyu Island and Penghu Islands. However, because of long-term excessive poaching, combined with habitat destruction caused by construction projects, their nesting habitat is limited in Wangan (Penghu Islands) and Lanyu islands. The Green Sea Turtles in Lanyu Island are of particular interest because they affect the behavioural evolution of terrestrial organisms in this region. The Oligodon formosanus in Lanyu is observed to ingest eggs via a ‘food can opening’ approach. The females of Oligodon formosanus defeat males to take possession of turtle eggs which differs from the male-dominated survival mode of most organisms. The Turtles also manifest parental care behaviour in Mabuya longicaudata in Lanyu, a rarely observed phenomenon. The unique ecological influence of Lanyu Green Sea Turtles has important value for the behavioural evolution studies of reptiles.

Lanyu Green Sea Turtles are affected by a loss of habitat, which has led to significant reduction in their numbers. The Forest Bureau of Taiwan has conducted multiple biological studies on Green Sea Turtles since 1992, including a long-term investigation on the reproduction and ecology of the Turtles on Lanyu Island since 1996. Conservation measures include monitoring the numbers and activities of Green Sea Turtles, rescuing injured Turtles, shifting nests to more suitable local habitats, and various forms of educational and promotional activities aimed at raising local awareness about the project, as well as obtaining support from local communities. These activities include planning and promoting Green Sea Turtle ecotourism, training tour guides, and employing local residents to assist with ecological restoration related projects. After many years of efforts, conservation measures have still not integrated successfully into the local community. Staff conducting the conservation measures had been verbally humiliated and physically attacked by local residents, and some residents even considered them an important source of the disruption towards local turtles’ living environment. Green Sea Turtle conservation measures did not consider local aboriginal culture and the meeting of these two resulted in tension and conflicts.

The traditional culture of the local aboriginal Tao tribe on Lanyu Island has a very strong cultural taboo regarding the Green Sea Turtles. Their habitat is close to the local population’s traditional cemetery and the area is regarded as the living space of evil spirits. The organisms living in these areas, such as green sea turtles, are believed to have devil spirits. Interactions with taboo objects or areas, or even grains of sand, are believed to lead to disasters. Bringing items from the beach back home is similar to bringing the devil home, which would bring misfortune or sickness to family members. This taboo prohibits the Tao tribe from disturbing and hunting the turtles.