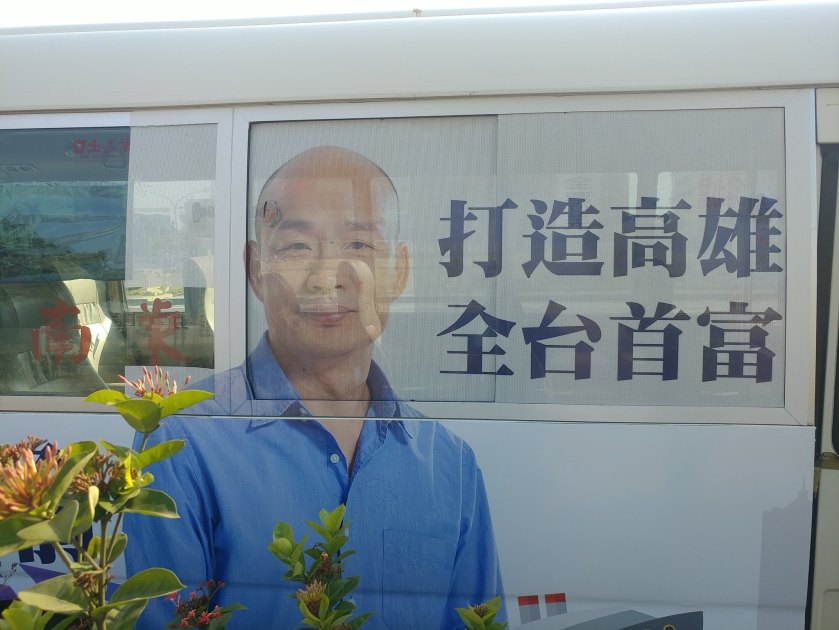 In running up to where we are now ahead of the 2020 Taiwan Elections, the Cross-Strait policies of both incumbent Tsai Ing-wen and the main competitor, KMT candidate Kaohsiung City Mayor Han Kuo-yu have shown some clear differences. In contrast with Tsai’s cautious DPP stance, Han’s colorful proposals on Cross-Strait relations has caught the attention of many, drawing staunch support from people who agree with his visions of a “non-political” peace and prosperity across the Taiwan Strait. The political implications of his approach, however, have also caused caution among others.

If someone said that Han Kuo-yu would be KMT’s 2020 presidential candidate three years ago, it would be safe to assume that most people would’ve thought of that as an outright joke. Rising from relative obscurity and a lengthy political exile, Han had only made a comeback to politics in 2013 as the general manager of Taipei Agricultural Products Marketing Corporation (TAPMC). In 2017, he even unsuccessfully ran for the KMT chairmanship. However, 2018 turned out to be a lifechanging year for Han. Not only did he defeat his main rival in the Kaohsiung mayoral race, Chen Chi-mai of the ruling Democratic Progressive Party (DPP), which had held the city since December 1998, he also became a nationally-renowned political figure and a clear favorite for many KMT supporters to run for the 2020 elections. That he finally did when Han defeated his closest challenger, Hon Hai Precision Industry Co. former chairman Terry Gou by nearly 20 percent in the KMT’s primary.

Han’s views towards Cross-Strait relations have been relatively consistent prior to becoming the KMT’s 2020 presidential candidate. When running for the KMT chairmanship as a long-shot candidate in 2017, Han stated that both sides of the strait should “place tondu (unification-independence) on two sides, and livelihoods and peace in the center.” Han contended that both sides of the Taiwan Strait belong to a “close-knit family,” and only through co-existence and co-prosperity can Taiwan’s future development be ensured. “Everything should return back to livelihood issues, no more ideology, and no more flowery slogans,” Han said, while he further stated that anyone who talked about China policies too much should be seen as using ideological stances for personal political gain. He also stressed the importance of balance in Taiwan’s international relations by putting forward a gendered analogy of Taiwan as a beautiful lady, whom he argued should not easily marry with anyone (US, Japan, China) or else risk retaliation by other admirers. These views were further upgraded during the 2018 Kaohsiung mayoral race, when Han positioned himself as a grassroots figure willing to do anything to ensure the city’s rejuvenation and help it citizens “make big money”, and framed Tsai’s tense relations with China as bad economics for the city’s businesses and industries. One of his official slogans “South-South Cooperation” stressed the importance he placed on expanding Kaohsiung’s trade ties with cities in Southern China and Southeast Asia.

After becoming the mayor of Kaohsiung, there were two major events which further allowed Han to put forward his views towards Cross-Strait relations. The first one was when Tsai gain points by refuting Chinese President Xi Jinping’s “one country, two systems” message for Taiwan in January 2019, Han offered the “Two Don’t Doubts” as his own diagnosis of the issue. The “Two Don’t Doubts,” as Han stated, meant “don’t doubt the Communist Party’s determination to reclaim Taiwan” and “don’t doubt the determination of the Taiwanese people to pursue democracy and freedom,” while the collusion, compromise and competition between these two notions has been a continuing challenge for all Taiwanese politicians.

The second event which put Han in the spotlight of Cross-Strait relations was his official visit to China in March 2019. Despite positioning the trip as an “economic tour” and claiming to have signed deals worth over 170 million US dollars, Han sparked controversy by becoming the first local Taiwanese administrative chief to set foot in the Liaison Office of the Central People’s Government in Hong Kong when meeting its director Wang Zhimin. He also met with Liu Jieyi, director of the Chinese State Council’s Taiwan Affairs Office during his trip, a meeting in which both he and Liu voiced ardent support for the “1992 Consensus”.

Navigating (with Difficulty) the Presidential Candidacy

After Han formally announced his bid for the presidency in June 1st, however, his views on Cross-Strait relations have received much elevated scrutiny, as he was now eyeing the role of the country’s President, not the leader of local city who could easily evade tough questions on national security. When the Hong Kong protests broke out in early June, his initial indifferent reaction drew widespread criticism, while Han’s earlier positions towards the “1992 Consensus” continued to take toll on him as the violence in Hong Kong further escalated and continued to tarnish the international image of the “one country, two systems” model. Han was forced to publicly reiterate his objection of the “one country, two systems” Taiwan scenario in mid-June, a move widely seen as motivated by the mounting unpopularity of the notion and an urgent political need to disassociate from it. He further urged Beijing to allow democratic elections and universal suffrage for the Hong Kong’s legislators and chief executive in November, despite also stressing his opposition towards Hong Kong independence to comfort Beijing of his intentions. While these statements were aimed at reassuring the public that Han’s position on Cross-Strait relations was not a betrayal of Taiwan and its autonomy, he has continued to be seen as a China-friendly if not pro-China candidate by many in Taiwan, especially among the younger generation. Allegations that Han’s victory in the 2018 mayoral elections was assisted by cyber operations originating from China also did not help his case.

In October 2019, Han unveiled a Cross-Strait Policy Whitepaper alongside members of his team. He proposed four principles: one, an insistence on the “1992 Consensus, Different Interpretations;” two, a rebuilding of trust across the Taiwan Strait, and a reestablishment of dialogue mechanisms; three, establish a dialogue mechanism between the administration and the opposition to form an internal consensus; four, let Taiwan be an example for the mainland’s democratization. During the October press conference, Han also argued that “the Tsai administration continues to be anti-China and act with hatred towards China, which will only push Cross-Strait relations towards the brink of war; if war breaks out in the Taiwan Strait, Taiwan will become a battlefield.” But while Han hints at the disastrous effects of war, he also spends lengthy time explaining how tense Cross-Strait relations has caused the decline of Chinese tourists visiting Taiwan, affected the export of Taiwanese products to China, and also prohibited Taiwan’s chances of participating in regional economic integration. For Han, it is the DPP that is causing rifts in Cross-Strait relations, not China, which has severely damaged prospects of peace and the economic livelihood of normal Taiwanese citizens. A win-win scenario is still possible and vital in his eyes.

According to a recent interview of Han’s running mate Chang San-cheng by Deutsche Welle, the fact that Beijing has not voiced opposition to them strengthening the linkage between the “1992 Consensus” and “Different Interpretations” in this white paper means that Beijing has not closed doors over this idea yet. Both Han and the KMT have tied their personal fates on the “1992 Consensus,” and can not risk another blunder from Beijing on this notion which could further weaken their already besieged electoral support. However, Beijing does not always think about Taiwan through the prisms of the KMT’s wishes. With a struggling economy and an ongoing trade war, Xi Jinping could always find Taiwan as an easy target to divert domestic attention. Rising Chinese nationalism would almost certainly stand in support of these actions. But an even more difficult challenge would be this: former Vice President Vincent Hsiao (Ma’s first term; 2008-2012) has stated more than once that Cross-Strait economic relations have gradually transitioned from complementary to competition due to the rise of China’s manufacturing and technological power, a view that has been widely supported by Tsai and many other leading political figures. Cross-Strait peace has never guaranteed only economic cooperation and no economic competition. Han, however, has yet to seriously tackle this issue.

The KMT is tied to the idea that peace with China is the only way out for Taiwan, and should be maintained despite its heavy political costs. This has led them to avoid openly refuting Xi’s infringement of the “1992 Consensus” in January 2019, instead placing significant focus on the domestic opinion front against it being associated with Beijing’s framework. For Han and many in the KMT, China is a non-issue, and putting too much constraints on this will only cost Taiwan’s future. Economic ties with China are crucial and necessary.

If Han wins the election, however, how should he further ease existent public anxieties towards his Cross-Strait relation proposals? This question should not be taken lightly, as the 2014 Sunflower Movement has clearly indicated what repercussion it might bring. More answers and actions are needed.

Jeremy Huai-Che Chiang is a Non-Resident Research Associate at the Taiwan-Asia Exchange Foundation and MPhil Candidate at the University of Cambridge, U.K.