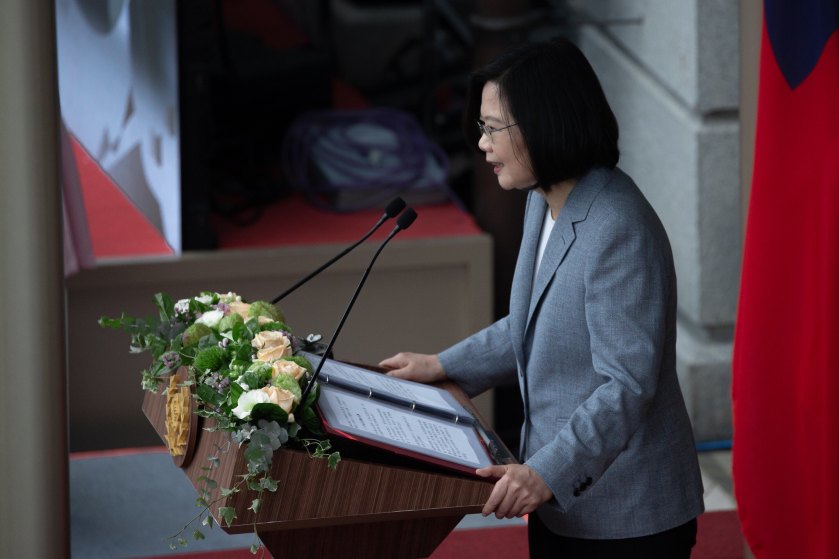 As usual, Tsai Ing-wen’s inaugural speech on May 20 maintained her low-key, down-to-earth style without much surprise. From Beijing’s perspective, since she did not explicitly accept the “one-China principle” in the speech, she failed Beijing’s so-called “exam” again and therefore was severely criticised by Beijing. But since Beijing had already concluded that she would never openly accept the “one-China principle,” her speech did not surprise Beijing. Washington has been praising Tsai Ing-wen’s low-key style of cooperating actively with Washington on the one hand and not provoking Beijing on the other, so her zero-surprise speech satisfied Washington once more. The day before the speech, U.S. Secretary of State Pompeo publicly congratulated Tsai Ing-wen. This unprecedented supportive gesture also suggested that he had known the content of the speech in advance and that mutual trust between Washington and Taipei has reached new heights.

By comparing it with Tsai’s inaugural speech four years ago, we can discover some new features of this time around. Unlike four years ago, when she opened her speech by thanking everyone for electing her as President, she opened her speech with a section titled “A Taiwan Community.” This refers to Taiwan’s internationally acclaimed successful experience in fighting the COVID-19 epidemic over the past four months as an essential cornerstone for the growth of the Taiwan community. By mentioning first “the Republic of China” and then twice “country”, she was, in fact, demonstrating that Taiwan’s success in fighting the epidemic had greatly enhanced the Taiwanese’s identification with the Republic of China as a country with a stronger sense of community and destiny. It is an ingenious way of praising Taiwanese nationalism while leaving much less room for Beijing’s over-interpretation.

Secondly, unlike four years ago, the four-month-long pandemic is creating rapid political and economic changes around the world, and it is providing Taiwan with unprecedented challenges and opportunities. Tsai Ing-wen’s use of the terms, “unprecedented challenges and unparalleled opportunities” to sum up the environment in which Taiwan will find itself over the next four years is reminiscent of Xi Jinping arguing that we are experiencing “a great change not encountered in a century.” Both Tsai’s and Xi’s assessment of the world situation — while addressing the enormous challenges faced —  places a greater emphasis on opportunities that would help their governments gain a more strategically advantageous position in a rapidly changing world order. Thus, such arguments are inherently optimistic and encouraging. However, as far as cross-strait relations are concerned — and because tensions will continue — both sides cannot be simultaneously optimistic, as one side is bound to become more strategically disadvantaged gradually.

Thirdly, unlike four years ago, Tsai’s speech placed defence, foreign affairs and cross-strait relations under the heading of “national security,”. In contrast, she placed other topics — such as economic development, social safety nets building, and institutional strengthening — under the heading of “national development”. Once again, we can see that Tsai’s emphasis on Taiwan as a “nation” and her attempts to label everything she will do in the second term with intense nationalistic colour. This is, of course, again catering to the appeals of Taiwanese nationalism, which she and the DPP have both promoted in her first term, especially during the past year.

Regarding cross-strait relations, there are, in fact, some areas in her speech that merit further discussion. In terms of word count, the section on cross-strait relations in her two speeches was only 300-odd words respectively, or only 5 per cent of each nearly 6,000 words speech. So, cross-strait relations are not the focus of the two speeches, which also shows that Tsai does not have high expectation for progress in cross-strait relations. Nevertheless, as in her last inaugural address, she still indicates that she would follow the Constitution of the Republic of China and the Act Governing Relations between the People of the Taiwan Area and the Mainland Area, implicitly expressing her recognition of “one China” as defined by Taiwan. Just days before Tsai’s inauguration, the DPP legislator Tsai Yi-yu withdrew from the Legislative Yuan a bill proposal for removing the “national reunification” language from the Constitution and the Act mentioned by President Tsai. This indicated that she was careful to avoid being seen as an active provocateur by Beijing.

Moreover, within her speech, in rejecting “one country, two systems,” she no longer cited her previous reasoning that “democracy and autocracy cannot co-exist in one country ” or “Taiwan is already an independent country.” Instead, she argued that “one country, two systems downgrades Taiwan and undermines the cross-strait status quo.” Is this new justification an implication that if Beijing could come up with a unification proposal that does not downgrade Taiwan, it is possible for Taiwan to accept it? If the DPP believes that the most significant obstacle to unification is the difference in the opposing sides’ political systems, and that unification will not be possible until the mainland also achieves western democracy, then unification is, indeed, far away. But if the largest obstacle to unification is the two sides’ unequal status, since the mainland can find a way to treat Taiwan equally, then unification is not that far away. This time, although Tsai continued to reject “one country, two systems,” her reasoning does not sound as decisively rejective as before.

While Tsai Ing-wen has been very careful in her handling of the cross-strait relations, Beijing is likely to be her biggest challenge in her second term. The most important reason for this lies not in Taiwan, but the rising conflict between China and the United States. The epidemic has exacerbated the conflict between the two great powers, further enhancing Taiwan’s strategic value to the United States, which is bound to improve relations with Taiwan in more areas. For China, the more valuable Taiwan is to the United States, the higher its threat to China. So, in no small extent, Washington, and not Tsai Ing-wen, is controlling Taiwan’s threat level against China. Although Tsai has insisted on not taking the initiative to provoke Beijing, she is less likely to stop Washington from using Taiwan to contain China. Beijing’s patience is not infinite, especially amid steadily rising nationalism in the mainland, and it will undoubtedly increase its pressure on Taiwan on economic, international, military, and other fronts.

In terms of the domestic situation, Tsai Ing-wen is facing an unprecedentedly favourable environment. The successful fight against the epidemic allows both her and the DPP to maintain the political upturn since winning the election in January. According to polls conducted by the Taiwan Brain Trust, those satisfied with Tsai Ing-wen’s performance in May of last year was only 34.5%, but this year’s figure in May has risen sharply to 74.5%.  Similarly, over one year, the satisfaction rate for the premier Su Tseng-chang has also risen from 43.7% to 68.9%. Moreover, the Minister of Health and Welfare — along with the anti-epidemic commander Chen Shih-chung — has risen even more dramatically, from 37.3% a year ago to 93.4%. This fully reflects the enormous impact of successful anti-epidemic efforts on public opinion in Taiwan.

Economically, Taiwan’s economy grew by 1.54% in the first quarter and is expected to grow by 2.37% for the whole year. The economic growth rate will undoubtedly become the top among the Four Asian Tigers again. Taiwan’s unemployment rate was 3.7% in both February and March, not changing much from the same period last year. Since the economic and social impact of the epidemic is not extremely severe, the economic stimulus package introduced by the Tsai administration is only 5.5% of GDP, which is lower than in many developed countries. More importantly, the DPP’s most significant political rival — Taiwan’s major opposition party Kuomintang (KMT) — has, so far, shown no signs of coming out of the political trough, imposing much fewer constraints on the Tsai administration.

Over the past four years, Tsai Ing-wen has impressed observers by demonstrating how she successfully managed to transform both the opportunities offered by Washington along with the challenges imposed by Beijing into her political capital. Will she still be able to effectively handle the unprecedented challenges and unparalleled opportunities in her second term? It seems the most significant challenge will be external, and the most substantial opportunity will be internal, which are opposite to those in her first term. Therefore, she needs to adjust priorities and strategies accordingly to sustain her success from the first term.

Qi Dongtao is a Research Fellow in the East Asian Institute of the National University of Singapore and is the author of The Taiwan Independence Movement In and Out of Power (World Scientific Publishing, 2016).

This article is part of special issue on President Tsai’s inauguration speech.