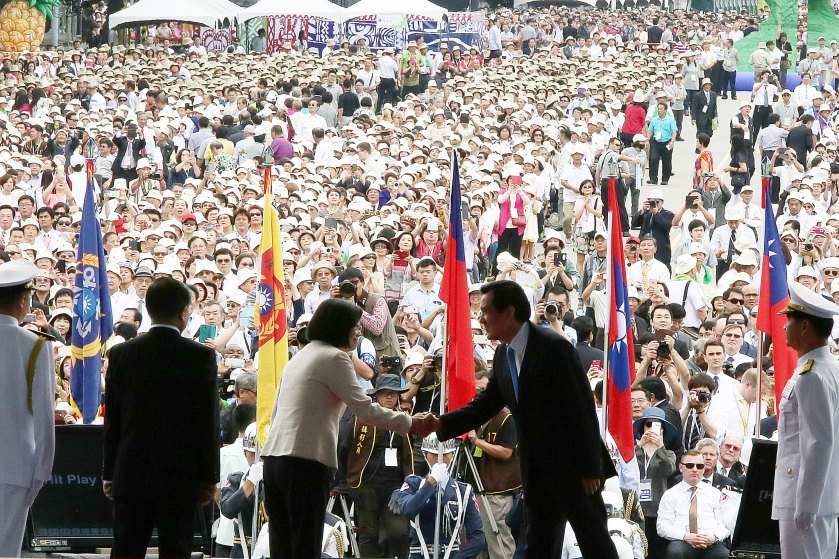 What will President Tsai Ing-wen do in her second term? To answer this question, this essay reviewed three previous Taiwanese Presidents’ second terms and attempted to assess how Tsai and Taiwan politics operate in 2020-2024.

Tsai is the most formidable Taiwanese President of the last thirty years. Her unprecedented political clout contributes to seven explanations as to why this is the case. Firstly, Tsai won the reelection with a large margin of votes: she garnered 57.13% of all votes, and her opponent only received 38.6%. In comparison to such a result, Lee Teng-Hui won the reelection in 1996 with 54.2% of the vote. On the other hand, Chen Shui-bian had 50.11% of the votes in 2004.

Additionally, Ma Ying-jeou won the election with a margin of 51.6% in 2012. Secondly, in 2020, there is no imminent challenger to Tsai’s absolute status. The defeated KMT candidate Han Kuo-yu was ousted from a recall election, and the oppositions parties were in a state of political disarray. Thus, Tsai enjoyed similar political advantage to Lee in 1996 when the KMT still dominated most aspects of Taiwan society.

Thirdly, ideology is dangerous, and Tsai seems to have a distinct lack of it. Indeed, Taiwan Presidents usually have their essential political ideology in Taiwan’s statehood. They tend to stress more on this subject in their second term to assure their positions in Taiwanese history. For example, Lee initially announced a Special State-to-State Relationship in 1999 and then literally terminated Taiwan’s friendly relation with Beijing. Lee’s stubborn stance and bold attempts on Taiwan independence split the KMT and paved the way for the Party’s decade long losing power and unity.

As another example, Chen initiated a constitutional move to create a new state in his second term. This radical political move alienated the majority of DPP and consolidated the opposition KMT. This, in turn, helped Ma to win the presidency with the most significant margin of votes in Taiwanese history (58.45%). Eight years later in 2008, Ma — with his deep-rooted Chinese nationalism — also repeated the same mistake by relentlessly pushing for the enlargement and deepening of Cross-Strait economic interdependence. In the end, hundreds of thousands of angry student protestors stood on the street to stop the bill. The anti-Ma movement from the young generation commenced a new era of DPP supermajority. Compared with Lee, Chen and Ma, Tsai is usually calm and rational, which is indicative of a lack of strong ideology. She did not cross the line to push for anything excessive on the Taiwan statehood issue. She will, thus, maintain political stability for the next four years.

Fourthly, Tsai seems to understand an important principle, namely that if she has control over the Party, then she controls the State. This lack of control is reflected in Lee, who inherited the reign from the authoritarian regime of KMT. He was always the Chairman of the Party until losing the election in 2000. With his controversial victory in the 2004 reelection, Chen was not able to control the Party in his second term. The DDP heavyweights took turns to lead the Party. Hence, Chen could only be the Chairman for three months in 2007, which was close to the end of the term. Ma began his second term by focusing on his ideal institution of party-state separation. When he realised the then Party boss Wu held him back, Ma retook the Party one year after his reelection win. Nevertheless, it was already too late. Throughout Ma’s tenure, his real enemies were always inside the KMT. In this regard, Tsai took back the chairmanship right after the beginning of the second term. Consequently, there are no other competitors. She will, thus, be able to enjoy the same power as Lee had back in the 1990s.

Fifthly, Tsai has strong support from the United States. Hence, international society cannot be friendlier to Taiwan. Lee was not a good friend of the US. The Clinton administration in the late 1990s was troubled by domestic politics involving scandal and impeachment. Besides, President Clinton supported the engagement policy with China, and Lee’s departure from One China Policy did not fit with such an ideology.

After all, the application to United Nations membership was problematised due to diplomatic battles with China, and the Bush administration eventually labelled Chen as a “troublemaker.” That was how bad US-Taiwan relations got during Chen’s second term. Needless to say, Ma was no better in dealing with Washington DC. With his enthusiasm for bridging Taiwan and Beijing, the US was ultimately cautious concerning Taiwan’s strategic betrayal from US interests in the region.

However, this time around, Tsai was lucky to arrive at the advent of the Trump era. Indeed, from trade wars, Hong Kong protests and the Coronavirus crisis, not to mention the Indo Asia Pacific Stability Initiative, Taiwan has cashed out from battling US-China relations. Consequently, US support gave Tsai a hefty political asset to lead in the ensuing domestic political power struggle. Lai Ching-te’s fall in the 2019 primary was evidence of this.

As a sixth reason, Tsai does not have a good relation with Beijing. I define this as her advantage because according to history, Beijing’s support did not bring too much political clout to Taiwanese Presidents. On the contrary, Beijing’s endorsement came as a curse. Lee consolidated his power and expelled the KMT mainlander old guards by distancing from Beijing. Both Lee and Chen — used to be mocked as “Moses and Joshua” of the Taiwan Independence movement — benefit from their anti-China stance. The new generation of Taiwanese people overthrew Ma’s eight years of pro-China policies. Without a friendly Beijing, Taiwan’s economy continued to grow, and Cross-Strait commerce remained prosperous. Beijing’s threatening talks never came true, and the economic surplus never stopped flowing to Taiwan. In the next four years, Tsai can always go back to play the China card, as she did in her worst days during 2019; it always worked in Taiwan.

Finally, second term Presidents usually care about their legacies. To this end, Lee launched structural reforms in the military and bureaucratic sector. These reforms brought complaints and immediately weakened Lee’s power. Chen won his reelection with a suspected shooting incident. That said, he did not have enough leverage to promote his policy agenda. Instead, he was entangled in a series of corruption accusations. Eventually, because of these allegations, he ended up sentenced to life in prison. Ma, in his second term, also began to carry out reforms right away — including increasing stock market tax and raising gasoline/electricity price. Those important, but unpopular policies, cost Ma’s decade-long admiration in Taiwan. Tsai probably learned the lesson from previous Presidents. Based on her inauguration speech, along with her first half-year, we found no core reform agenda on the table so far. She mentioned and discussed a lot of hypotheticals, but hardly offered anything reflecting notable material changes.

What will President Tsai Ing-wen do in her second term? The irony of previous Presidential experiences in Taiwan is that the more you try, the worse it invariably gets. Moreover, the more you think you are doing the right things for Taiwan, the worse the consequences are for your life. Tsai has all the right cards in her hand now, and she is smart enough not to use them. It shows the strength and progress of Taiwan’s democracy—not the leadership per se but how the system provides stability and sustainability.

Mark Wenyi Lai is an Associate Professor, a non-resident fellow of the Taiwan Studies Programme at the University of Nottingham in UK, Chairperson of the Department of International Affairs, Graduate Program of International Affairs, Wenzao Ursuline University of Languages, Taiwan. This article is part of special issue on the President Tsai’s second term.