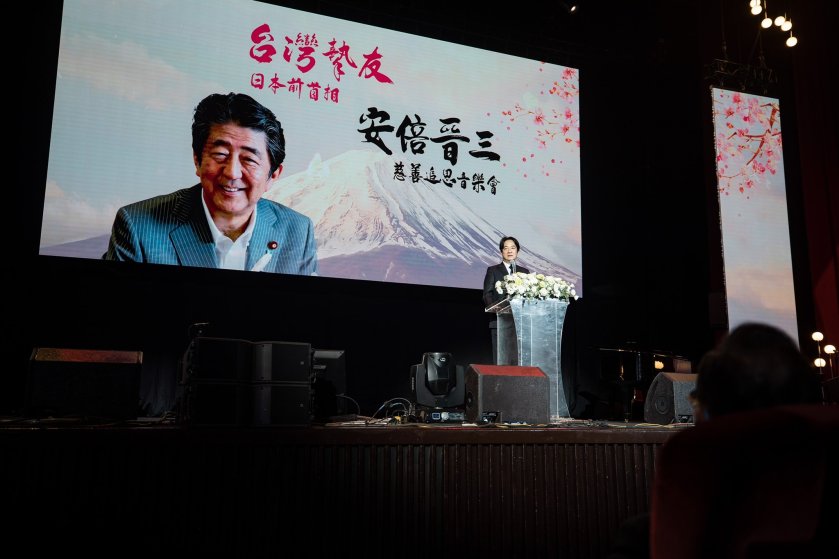 Abe has widely been regarded as ‘the Prime Minister who is most supportive of Taiwan’. Not only had he been an advocate for legitimatising Taiwan’s status on the international ground on many occasions, but he also made the renowned statement during a video conference with the Taiwan Institute for National Policy Studies in 2021 that ‘if something happens to Taiwan, it means something happens to Japan’. Hence, although the news of Abe’s assassination sent shockwaves worldwide, the political implications of his untimely death on the future trajectory of Taiwan-Japan warrant further investigation.

A Continuation of the ‘Special’ Bond between Taiwan and Japan

Although with some initial uncertainty, after Prime Minster Suga Yoshihide succeeded Abe as the head of government in 2020, the special bond between the two countries have maintained. For instance, in his first one-on-one parliamentary debate, Suga referred to Taiwan as a country alongside Australia and New Zealand. Furthermore, though drawing fire from China and seemingly backtracking after top government spokesman Kato Katsunobu openly stated that there is ‘no change in Japan’s basic position of maintaining a non-governmental, practical relationship with Taiwan’, this did not deter Suga from offering approximately 3 million doses of COVID-19 vaccines to pacific islands in July 2021. Given his remarks stating that ‘the Pacific region faces new challenges, like competing with authoritarianism’, Suga’s actions were considered a method to strengthen ties with Taiwan-friendly island nations in the Pacific against China.

When Prime Minister Kishida Fumio took office in 2021, there were concerns given his modest approach to taking stands on controversial issues (e.g. cross-strait relations) and his decision to appoint the seemingly China-Friendly lawmaker Mr Hayashi Yoshimasa as foreign minister. However, Hayashi has emphasised that holding the chairmanship of the Japan-China friendship Parliamentarians’ Union does not indicate he is ‘pro-China’ but rather ‘knowledgeable about China affairs’.

Notably, Kishida granted Taiwan’s Vice President Lai Ching-Te a visa permit to offer his condolences and participate in Abe’s funeral service. Lai’s visit to Japan, though still in a private capacity, makes him the highest-ranking political figure to visit the country after the two countries ceased diplomatic relations in 1972. Kishida’s decision is widely regarded as a significant diplomatic stance to signal his commitment to maintaining the special bond between the two countries in the wake of Abe’s assassination.

The aforementioned instances all indicate that Taiwan-Japan relations have maintained, if not strengthened after Abe stepped down as Japan’s prime minister in 2020 and after his assassination.

Factors for Maintaining and Strengthening the Special Bond

Perhaps instead of enquiring whether the two countries’ special relations would be severed after Abe’s passing, the more pertinent approach is to understand the underpinning factors of a firm relationship between Taiwan and Japan.

The Main Structural Factor: The US factor

I believe two main and interrelated factors consolidate Taiwan and Japan’s special relationship. The first factor is the structural/external factor of geopolitics, whilst the second is the lack of sub-structure/domestic factor to alter the existing path-dependent trajectory. Coming from a historical institutionalist perspective, a research analyst focusing on the ‘stickiness’ of existing institutions such as cooperation arrangements, policymaking processes and more, I suggest that Abe’s assassination did not constitute a critical juncture/external factor that triggered the change of perception, interests and attitude of the Japanese government to readjust its foreign relationship with Taiwan.

To better illustrate my argument, let me point out that arguably the main structural factor that continues to influence Japan’s foreign policy orientation is its security cooperation with the US government, embodied in the Anpo Joyaku (安保条約) or formally theTreaty of Mutual Cooperation and Security Between Japan and the US (herein US-Japan Security Treaty). The US-Japan Security Pact has allowed the US government to tie Japan’s economic and security interests with the US’s national interest in maintaining the existing US-centric international order.

The imposed effect is that it constrains Japan’s foreign policy options and places the country at a disadvantageous negotiating position to negotiate whenever facing a misalignment of national interests. Japan is not the only country that faces this issue. This also applies to regional countries such as Taiwan, South Korea, and Southeast Asian nations (e.g., the Philippines). This is because the post-World War II East Asian regional security order has been built on a ‘hub-and-spoke’ system between the US and regional countries.

Thus, with the US government adopting a less forgiving attitude to China’s assertive regional policy stance on issues such as the South China Sea issue and Cross-strait relations and less tolerant of how China is free-riding the international economic system since the Trump administration, there has been no reason to expect the US government to change course swiftly. For example, in a recent interview, President Biden openly remarked that the US government would defend Taiwan during China’s ‘unprecedented attack’. Given this is not the first instance that President Biden has made this remark, it has contributed to the speculation on whether the US government is altering its conventional foreign policy orientation towards Taiwan from ‘strategic ambiguity’ to ‘strategic clarity.

Although the US factor does, to a certain extent, shape Japan’s foreign policy origination, this does not suggest that Japan has no autonomy in foreign policymaking. The important circumstance, or ‘push’, for Japan to put forward foreign policies that misalign with the US government’s national interests is the existence of sub-structural/domestic factors. For example, if pushing for policies that merely fulfil the national interests of the US at the cost of Japan, this maybe at the cost of losing public support and subsequently change of political leadership. This is notably exemplified in the issue of reallocating the US Futenma Marine Base in Okinawa for the Democratic Party of Japan, the ruling party from 2009-2012.

Nevertheless, recent developments suggest that the ‘Abe factor’ is expected to have little to no effects on challenging the path-dependent trajectory: the US’s geopolitical stance to counteract China. Two points underpin the argument: 1) Abe’s controversial public perception in Japan; 2) the alignment of Kishida’s foreign policy with the US government’s China policy.

To begin with, Abe is viewed as a controversial right-wing politician who constantly promoted an ethnocentric ideology in Japan, such as his onerous endeavour to revise Article 9 of Japan’s constitution. Thus, recent decisions to hold a state funeral for Abe has faced stark public opposition in Japan due to its substantial costs of approximately £10.1 million and revelations about the ruling Liberal Democratic Party’s (LDP) ties with the Unification Church. As of the writing of this article, a man had set himself on fire to protest over the government’s decision to organise a state funeral for Abe.

Interestingly, domestic opposition to Abe’s right-wing political stance does not correlate with his approach to Taiwan. The reason for this could be two-fold. For one, surveys conducted throughout the years demonstrate the constant trajectory that many Japanese people hold negative perceptions toward China, for instance, in 2016 (i.e. 86%) and 2022 (i.e. 87%). Secondly, the somewhat continuous hostile attitude amongst the general public of Japan toward China is juxtapose with constant friendly domestic-level exchanges between the Taiwan and Japan, especially during times of hardship, such as Taiwan’s support for Japan during the Great East Japan Earthquake in 2011 and vice versa in the 1999 Jiji Earthquake.

Hence, although we have witnessed the international community expressing their sorrows and offering their condolences to the passing of Abe, these actions are unlikely to resonate with Japan’s general public and subsequently create any challenge to existing foreign policies, especially concerning Taiwan.

Second, we should not falsely assume that Abe and Kishida hold conflicting approaches to engaging with China simply due to the latter’s background as a long-time member and current leader of the Koichikai (宏池会), a leading faction within the ruling LDP that is well-known for cultivating ties with China and focusing on economic developments. For instance, Kishida had repeatedly assured Japan would keep its ‘door open for dialogue during his tenure as foreign minister (2012-2017). Yet, after China’s assertive foreign policies, such as unilaterally establishing the Air Defense Identification Zone in the East China Sea in 2013 and proposals for establishing the Asian Infrastructure Investment Bank in this period, observers have pointed out that Kishida had become more reluctant to emphasise China being ‘the most important bilateral relation’ for Japan in subsequently news conferences.

Recent developments also demonstrate Kishida’s change of attitude/approach to engaging with China. For instance, Kishida has actively participated in the Quadrilateral Security Dialogue together the US, India, and Australia. In addition, his outspoken remarks concerning the Ukraine-Russia war that ‘using force to unilaterally change the status quo shall never be repeated’ is regarded as signalling Japan’s stance on China’s increased military activities in the Taiwan Strait.

Abe’s passing is a loss for Taiwan, given his life-long support of the country and his endeavours to foster a closer relationship between the two countries. However, although my analysis shows that the special relationship between Taiwan and Japan will maintain, if not further enhanced, it is crucial to point out that this is not due to Abe’s political clout nor any particular sentiment to sustain his legacy in Japan. Instead, it is due to a combination of the existing structural factor of geopolitics and the lack of sub-structural factors to challenge the former’s path dependency that enables the continuation of a close and firm Taiwan- Japan relationship.

This article was published as part of a special issue on “Taiwan-Japan Relations.”