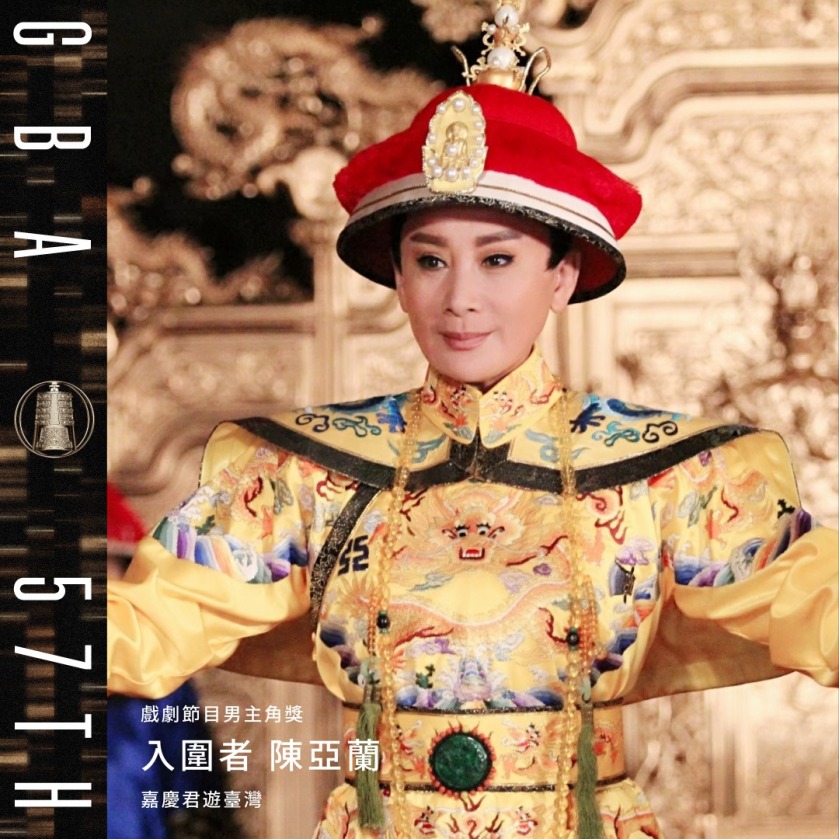 October 22, 2022, outside the Sun Yat-sen Memorial Hall in Taipei, ​Taiwanese Opera performer Chen Ya-Lan (陳亞蘭) astonished audience members on the red carpet for the ​57th Golden Bell Awards (GBA). This annual award honours excellence in television and radio programs created in Taiwan. As a female performer, Chen broke records with her Best Leading Actor Award nomination. With the artificial moustache paired with Dunhill’s well-fitted suit, Chen’s modelling immediately raised everyone’s eyebrows and became a highlight of the GBA. Her black suit was draped over an inner red shirt, and the buttons boldly opened to the navel, making Chen look like a suave yet dissolute handsome man. After entering the awards ceremony, Chen replaced her usual handsome appearance in front of the screen by donning a black puff-sleeved dress; such an outfit transformed her back into a woman waiting to welcome the shining moment of her life and in GBA history. Her ability to freely switches genders in acting and appearance demonstrated the androgynous charm that is unique in Taiwanese opera performance. Chen’s nomination for the award attracts the younger generation’s attention to how Taiwanese opera, as a traditional performing art, is also advancing with the times and able to arouse discussions on gender themes.

The First Actress Who Won the Best Leading Actor Award

Chen’s performance as a fictionalized version of the Qing Dynasty Jiaqing Emperor in The Lord Jiaqing’s Journey to Taiwan ​(嘉慶君遊臺灣) earned her the Best Leading Actor award. The 30-episode program of ​The Lord Jiaqing’s Journey to Taiwan features a series of Taiwanese opera (also known as kua-a-hi or gezaixi ​歌仔戲) performances. In the TV drama, numerous female performers act male roles, which reflects the performing convention of traditional Taiwanese opera. ​To adapt to the camera’s close-ups, Chen’s cross-dressing performance is more life-like than the typical Taiwanese opera on the stage. Watching Chen’s performance on TV projects many women’s romantic imaginations of an ideal love relationship that is inaccessible in real life. As the first woman in Taiwan’s history to win such an award that always highlights male actors’ achievements, Chen said that she was shocked to win, and she admires Taiwan’s progressiveness in giving this award to a woman. Chen set a record and opened more possibilities for Taiwanese opera actresses who portray male characters to compete for the award for their cross-gender performances.

The emergence of numerous swordswomen and women performing as men were two of the major advertising points of Taiwanese opera in commercial playhouses. The plots often included damsels in distress seeking the support of swordswomen, who appeared on stage and heroically rescued women in need. It was also getting more and more common that women played swordsmen in commercial playhouses. With the shift in gender dynamics, audiences marvelled at the strong capabilities of women. The performance resonated with women audiences’ empathy and fought against negative stereotypes that women should be lachrymose and obediently bear a miserable fate. In addition to the rising popularity of swordswomen roles, actresses performing as male protagonists were the most appealing stars in each troupe. This was probably because many poor families sold their daughters to the troupe, so actresses were often the main force of Taiwanese opera. Another possible reason for women playing men is that Taiwanese opera usually highlights love stories, and it is less awkward when two women perform intimate interactions on stage. The swordswomen and women-performed male characters in Taiwanese opera projected the romantic imaginations of many female audience members. The disruption of obedient femininity effectively expanded the audience member’s perspectives. By witnessing empowered female identities and gender configurations, audience members could explore their own sexual desires and bodily imaginations.

​​Taiwanese opera encountered transmedia transformation in the 1960s when playhouses gradually ended due to the rise of new media, such as movies and television. Some Taiwanese opera performers took advantage of the film trend and joined productions of Taiwanese opera movies or TV programs. Others could not enter the film industry and had to acclimate themselves to the transition to outdoor stages. However, no matter which route these actresses chose, the cross-gender performance of Taiwanese opera remains until today. Leading actresses who performed as male protagonists continued to be the star of the troupe, which even led to many naming the troupe after the leading performer to appeal to fans. Chen’s mentor, Yang Li-Hua (楊麗花), was one of the most famous actresses who laid the groundwork for other actresses to take on male characters in Taiwanese opera on TV. Accompanying the popularization of TV, Yang has been a household name in Taiwan, even viewed as a national treasure. Back in the 1960s, black-and-white television had just come to Taiwan. In the afternoons, when Yang performed Taiwanese opera on TV, everyone waited in front of the TV and wanted to see how she would portray ​male roles, playing everything from emperors and aristocrats to warriors and beggars. Female fans even crowd around the TV studio bearing fancy gifts and causing traffic jams.

Representing the Cultural Value of Taiwan

Chen’s crowning of this award shows how Taiwan has progressed in terms of gender standards and norms. In her acceptance speech, Chen thanked Yang in tears as she believed that Yang had taught her how to be a decent person and ​interpret male roles. Thus, Chen even contended that this award should be given to Yang, for she is always the best actor in the audience’s hearts. Chen is not the first person to be shortlisted for an important performance award in Taiwan for an actress playing a male role. In 1963, the novice actress Ling Po (凌波) was shortlisted for the Golden Horse Film Award for her role as the leading actor Liang Shanbo in the Huangmei musical movie ​The Love Eterne ​(梁山伯與祝英台). This movie caused a sensation in Taiwan, so it was unreasonable not to award Ling for her outstanding performance. However, at that time, whether to award the Best Actor or Best Actress to her raised debates. The judges of the Golden Horse Awards thus chose to technically avoid the gender issue by offering her a special award for the Best Performer that year. This approach strategically bypassed the difference between the actress’s biological gender and the gender of the characters she played, but it also reflected how people at that time tended to de-genderize and preserved their conservative expectations of women’s gender roles. Things considerably changed ​in 2020, Chen and Yang both submitted their performances in The Timeless Virtues​ (忠孝節義) for the Best Actor Award of GBA, and the Ministry of Culture confirmed that actresses are also eligible for the Best Actor award as it considers the characters’ gender for the award. Although neither of them got nominated, Chen’s acceptance of this award two years later marked a ​historic high note regarding both the recognition of Taiwanese opera performance and the increasingly open-minded gender culture in Taiwan.

Chen expressed her hope and determination to promote Taiwanese Opera, the only native drama originating from Taiwan, and she wants to inspire Taiwanese people to cherish the local culture in Taiwan. This is also her mentor Yang’s lifelong wish. Yang has told Chen to treasure Taiwan’s culture and has relentlessly preserved the culture herself. In her acceptance speech, Chen noted that “New York owns Broadway, Japan has Noh, Italy is known for opera, India has got Bollywood, and in Taiwan, many Taiwanese opera actors who are willing to put in blood, sweat, and tears. I hope everyone can come together and pass down our Taiwanese opera for the following generations!” With the affirmation of this honour, the audience can expect Chen and other Taiwanese opera actresses would have more shining moments on the screen or the stage, which denote the cultural value of Taiwan. These persistent actresses’ achievements also mark Taiwan’s societal progress in terms of gender acceptance. As more and more young performers, directors, and playwrights devote themselves to Taiwanese opera creation, the new generation’s gender perspective and innovative opinions are increasingly manifested. Therefore, the audience can optimistically expect the thriving of Taiwanese opera in the future.

Jasmine Yu-Hsing Chen is an Assistant Professor in the Department of World Languages and Cultures at Utah State University. She specializes in contemporary Chinese and Sinophone theater, film, media, visual culture, and literature. Her research examines how theatrical and cinematic works challenge government-promoted nationalism and how theater interacts with new media.

This article was published as part of a special issue on ‘Farewell 2022 and Welcome 2023’.