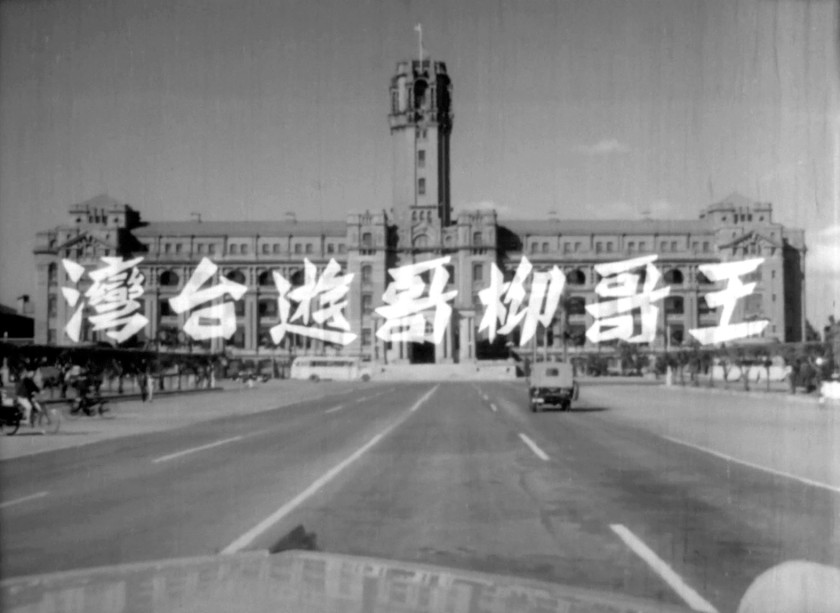 Taiwanese-language cinema has fascinated me since I first came across it in the late 1990s. So I am delighted to be co-organising with Dr. Ming-Yeh Rawnsley of SOAS University of London a project on the topic, Taiwan’s Lost Commercial Cinema: Recovered and Restored. The project, which begins this autumn and stretches into next year, consists of a symposium on the topic at King’s College London and a tour of screenings around British and continental European universities. (Full details including programme notes and other introductory materials are available at https://taiyupian.uk.)

On 20 October, in cooperation with the University of Nottingham’s Taiwan Studies Programme, we are showing Brother Wang and Brother Liu Tour Taiwan (王哥柳哥遊台灣, 1959) at Nottingham’s Broadway Cinema. A comedy classic featuring a Laurel and Hardy-style fat-and-thin duo, Brother Wang was one of the first Taiwanese-language films I ever saw, and is also one of Taiwanese-language cinema’s biggest and most enduring hits. Inventive and at the same time primitive in filmmaking techniques, it has an odd allure that captures some of the key qualities of Taiwanese-language cinema.

“Today, with the revival of interest in local identity since the end of martial law in 1987, Taiwanese-language films are being reclaimed as part of the island’s local heritage. Those that survive are being restored by the Taiwan Film Institute, and English subtitles are being added to them — developments that have made possible our project.“

The term “Taiwanese-language cinema” refers to what are known in Mandarin as taiyupian (台語片), a cycle of more than 1,000 feature films produced between the mid-1950s and early 1970s. They were recorded in Hoklo (Hokkienese, also known as Minnanhua), the Fujian-derived dialect spoken by most of Taiwan’s long-established islanders. During the Japanese colonial era (1895–1945), Taiwanese audiences were served by imports from Shanghai, Hollywood and Tokyo, recorded in Mandarin, English and Japanese, respectively. Therefore, Taiwanese-language films constitute the beginnings of sustained feature film production on the island. In an age before television, they also offered the first opportunity for local people to see their lives on screen with actors speaking their language. As a result, although often crudely made, the films were full of enthusiasm and hugely popular with audiences, who lined up around the block for their favorites.

Various factors, including the television boom, led to the demise of Taiwanese-language cinema in the early 1970s. That is sad but not surprising. However, as a scholar of Chinese-language cinema, what has shocked me is that such a large and significant industry has been so rarely mentioned in the scholarly literature. There are a number of reasons for this lack of attention. First, the Kuomintang government that took over the island after Japan’s exit wanted to see Taiwan as just another part of China. The government encouraged people to use Mandarin (the “national language” that very few islanders spoke), and was not interested in local identity. On the other side of the equation, it seems that Hoklo-speaking filmmakers and critics may not have been very proud of their artistic heritage at the time. Made cheaply in a few days, films like Brother Wang are energetic and fun, but hardly refined. By the end of the aspirational 1960s, many people were starting to be embarrassed by them.

There was also no film archive on Taiwan when these films were produced, a lack that along with the humid climate has left few of these films to survive today. Teresa Huang, head of the digital restoration department at the Taiwan Film Institute, told the symposium we held on 7 October that only 178 complete Taiwanese-language films survive. This is a very poor rate for the era, and has not helped the films escape obscurity. When I saw my first Taiwanese-language film about 20 years ago, I was also surprised to find it had no subtitles — not only no English subtitles, but no Chinese ones, either! If you did not speak Hoklo, you could not understand the films. Undercapitalization mean the production companies could not afford any unnecessary extras.

Today, with the revival of interest in local identity since the end of martial law in 1987, Taiwanese-language films are being reclaimed as part of the island’s local heritage. Those that survive are being restored by the Taiwan Film Institute, and English subtitles are being added to them — developments that have made possible our project. But now that we are beginning to get more access to the films, more puzzles are appearing.

Although there is no doubt that monolingualism — the dialogue of the films is 100 per cent Taiwanese-language — was necessary for local audiences at the time, are the films necessarily purely Taiwanese culture? Such a claim is complicated by circumstances of their production and circulation as well as by their contents.

On the production and circulation front, many of the directors and actors were not Taiwanese-language speakers. All sound was post-dubbed in this era, when synchronous sound recording did not exist in Taiwan’s cinema industry. If the actors spoke Mandarin and then someone else post-dubbed them in Taiwanese, the actors’ lip movements would not always match the soundtrack, making their non-Taiwanese backgrounds obvious. The films were also exported to Hokkienese-speaking audiences throughout the Chinese diaspora, and especially to Malaysia, Singapore and the Philippines. As a result, it would be an oversimplification to claim Taiwanese-language cinema as made exclusively by and for Taiwanese.

It would also be an oversimplification to claim the contents as purely Taiwanese in any simple way. It is true that the earliest films were based on local go-a-hi (歌仔戲) operas, which are unique to the island, and that the appeal of a film like Brother Wang for local audiences was related to seeing their cities and temples on screen. However, it is also true that many of the films were also part of a larger Sinitic cultural realm. For example, the martial arts film Vengeance of the Phoenix Sisters (三鳳震武林, 1969) may have been recorded in Taiwanese, but is an otherwise typical martial arts story of the filial pursuit of vengeance set somewhere on the mainland in dynastic China. The Best Secret Agent (天字第一號, 1964) is also in Taiwanese, of course. But this is incongruous, because the film is set in Shanghai during the 1940s war against the Japanese.

The Best Secret Agent also reveals other ways in which the films exceed local culture, because it was made partly as a response to the 007 craze for espionage films that was sweeping the world at the time. Watching these films, one finds numerous references to foreign popular culture. Back to Anping Harbor (回來安平港, 1972) is very much about Taiwan, but it is also an unmistakable reworking of Madame Butterfly. The Bride Who Has Returned from Hell (地獄新娘, 1965) is even an adaptation of the Victoria Holt novel Bride of Pendorric.

This complex combination of local settings and language with hybrid borrowings and settings makes Taiwanese-language cinema full of unexpected surprises. It reveals a much greater variety than we might at first have suspected and also offers us new insights into local Taiwanese-speaking culture of the martial-law era, which clearly aspired to cosmopolitanism at the same time as it yearned to see its own stories on screen and hear its own language on the soundtrack.

Chris Berry teaches film studies at King’s College London. His research is grounded in Chinese-language cinemas, and he is the co-editor with Lu Fei-i of the anthology on Taiwanese cinema Island on the Edge: Taiwan New Cinema and After (Hong Kong University Press). Image credit: Author provided.