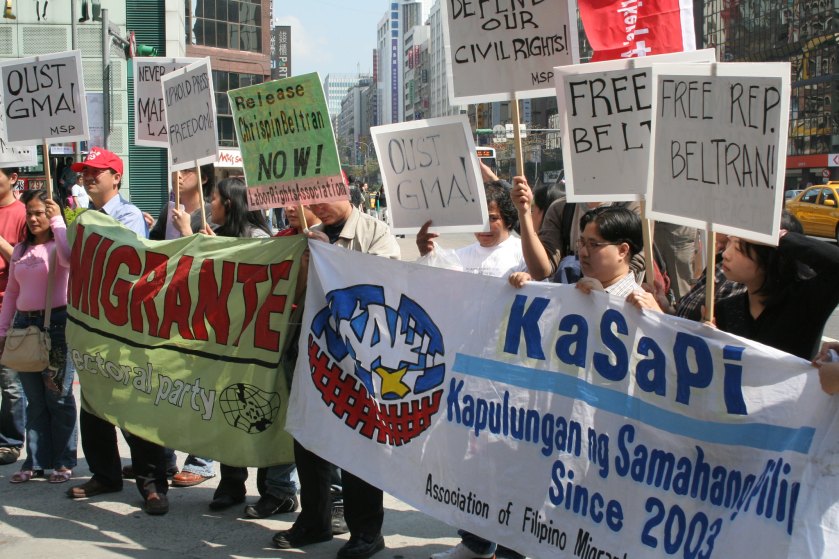 In an attempt to raise awareness about the lives of marginalised groups in Taiwan, the Taiwan Studies Programme at the University of Nottingham, U.K., organised a movie screening and discussion – Migrant Lives Matter: ‘Nine Shots’ – that showcased the dark side of migrant labour recruitment and employment in Taiwan. The film reveals some perspectives from different stakeholders, including labour advocacy networks, in addressing problems related to Taiwan’s labour migration system. Using the movie as a prompt, this article explores various advocacy networks and migrant labour movements in Taiwan. Why and how do these networks emerge and organise themselves? What are their motivations and activities? And how do these networks advocate for policy change and work to build solidarity to empower migrant workers?

Taiwan has officially imported migrant workers from Southeast Asia since 1992. A massive inflow of workers from Indonesia, Vietnam, Thailand, and the Philippines come to Taiwan to drive Taiwan’s economy and fill the labour shortage. These workers mostly contribute to traditional sectors such as manufacturing, construction, agriculture, fishing, and social welfare – domestic helpers and caregivers. According to Taiwan’s Ministry of Labour, at the end of October 2020, the number of Southeast Asian migrant workers in Taiwan reached a total of 701,240 workers or about 3% of Taiwan’s total population. Statistics from Taiwan’s Ministry of Labour also stated that more than 265,000 of migrant workers were from Indonesia followed by Vietnamese (228,433), Filipinos (151,071) and Thai (56,743). While Vietnamese workers contributed to the manufacturing sectors (195,937), the majority of Indonesian workers were involved in the social welfare sector (193,928), and the fishing and agricultural industry (8,478).

With the hope of earning money overseas to raise their living standards at home, these Southeast Asian workers face various challenges while working in Taiwan. As a minority, these workers often suffer from social and racial discrimination in society. They are also vulnerable to numerous abuses in their workplace such as rape and sexual harassment (mainly for women working in the social welfare sector), physical attacks, long working hours and verbal violence, to name a few. Another major problem lays on the brokerage system that helps the employment of migrant workers. These agencies or brokers require workers to pay a high amount of recruitment fees and other expenses that range between USD 1,500 and 6,000 per worker before departing to Taiwan. Migrant workers must incur loans to pay these fees, increasing their vulnerabilities to debt bondage and exploitation by these brokers.

Taiwan’s Labour Standards Act discriminates against care and domestic workers and excludes them from its coverage. Taiwan NGO CEDAW Report on Violence against Women has mentioned that there are no standard mechanisms or laws to ensure and regulate working hours, days off, holidays, the scope of work, maternity and annual leaves, accommodation, insurance, and physical and mental treatment of these care and domestic workers. Most of them only rely on the contract with their employers. Further, the lack of awareness about the workers’ living and working conditions by these countries’ representatives in Taiwan has seen these workers treated as ‘orphans.’ The absence of diplomatic relations between Taiwan and the sending countries has further complicated government-to-government contact and coordination.  These Southeast Asian workers, therefore, depend heavily on support offered by Taiwanese NGOs and labour activists to protect and voice their rights.

The lifting of martial law in 1987 and the introduction of democracy facilitated greater participation of civil society in Taiwan’s domestic politics. Many activists were involved in various forms of social activism, including labour movements. Migrant workers can join local labour unions in Taiwan. With long working hours, however, these migrant workers have little time to do other activities, including joining or organising with a labour union. Some employers also impose several restrictions, limiting workers activities outside their workplace. Further, some members of the union and local workers blamed foreign workers for taking their job opportunities, thus, creating division between local and migrant workers. Migrant workers NGOs were finally established in Taiwan in the 1990s, thanks to support and pressure from some members of civil society, such as Catholic-faith based organisations, Presbyterian Churches in Taiwan, Muslim associations, and Taiwanese labour activists.

Taiwan International Workers’ Association (TIWA), for example, was established in 1999 as a self-financed NGO that actively promoted the rights and protection of migrant workers. Besides advocating workers’ rights, TIWA also fostered the establishment of the KApulungan SAmahang Pilipino (KASAPI) in 2003 and Ikatan Pekerja Indonesia Taiwan (IPIT) in 2008. In addition to fostering migrant worker organisations, TIWA also set up Migrants Empowerment Networks in Taiwan (MENT), a coalition between Taiwanese NGOs and migrant labour organisations. Their mutual engagement and alliance are often called advocacy networks. These networks are primarily motivated to promote principled ideas and norms, including human rights.

They also aim at advocating policy changes to improve the living and working conditions of migrant workers in Taiwan. With these motivations, advocacy networks help migrant workers in achieving equal treatment and inclusion in society. Some prominent NGOs empower these workers by providing language and cultural training, thus enabling them to socialise with their local communities. Some NGOs also offer temporary shelters and legal services to resolve disputes between workers and their brokers or employers. Some also provide shelters for female domestic workers who are giving birth while working in Taiwan. Some grassroots community organisations also promote campaigns to ensure religious practices of these workers are preserved, mainly for Muslim workers. They advocate employers in Taiwan to provide places to worship for these Muslim workers.

Advocacy networks also organise various campaigns to voice their rights to the government of Taiwan and representatives of the sending countries. Their demands have included abolishing the brokerage system and replacing it with direct government-to-government hiring and the inclusion of domestic workers in the Labour Standards Act. TIWA, for example, has played an active role in proposing a draft bill to protect domestic workers. Several legislators have also sponsored such legislation, but the Taiwanese government is yet to respond. To exert policy change effectively, these advocacy networks may seek international attention to ‘name’ the issue and ‘shame’ the government.

They can look for external support from foreign governments, international organisations, and foreign NGOs or grassroots community organisations, by creating transnational advocacy networks. While the coalition with external actors may generate pressure from above, domestic NGOs and activists may push for policy change from below. The passing of an anti-trafficking law by the Ma Ying-jeou administration in 2009 revealed that pressure from the United States and transnational advocacy groups pushed the Taiwan government to adopt a crucial piece of legislation to protect migrants from trafficking. Taiwan’s reliance on the U.S., in this case, forced the Taiwanese government to comply with international standards of human rights.

In the same light, advocacy networks in Taiwan may also seek transnational collaboration with labour activists and NGOs abroad. The abolition of the broker system, for example, would require a cross-border coalition with foreign NGOs and grassroots community organisations, mainly in home countries. Recruitment agencies in home countries are bound by national laws. Any changes to laws will have a profound impact on the recruitment and employment of migrant workers. Migrant Care Indonesia has argued that the recent approval of the Omnibus Law by the Indonesian legislature, for example, relaxes the existing rules governing the migrant worker recruitment process and operation of private agencies, putting workers at a greater danger of exploitation. Given the strong connection between recruitment agencies in home and host countries, sustaining cross-border cooperation between advocacy networks in Taiwan and the sending countries to address the broker system is very much needed.

Cross-border networks and alliances may facilitate NGOs and labour activists in sending and receiving countries to share their campaigning strategy, alliance formation, and ideology, thus generating symbiosis in their movements. The formation of #MilkTeaAlliance among pro-democracy activists in Taiwan, Hong Kong, and Thailand is an excellent example of how activists sustain their cross-border networks. Taiwanese labour NGOs and advocacy networks may follow a similar path and form a coalition with their counterparts in Southeast Asia to address the broker system and other related issues. Lastly, advocacy networks in Taiwan can still consider gaining access to various consultative forums and international conferences organised by international organisations, such as IOM or ILO. While protecting the ‘orphans,’ these advocacy networks also need to empower themselves.

The mistreatment of temporary workers is a global issue, and Taiwanese themselves are not exempt from such injustice. Some young Taiwanese who seek temporary employment overseas also suffered from various forms of abuse in their workplace. Similarly, to improve the treatment of Southeast Asian workers in Taiwan helps Taipei to defend the rights of its own citizens in Western societies. While Taiwan understandably celebrates its global standing as a successful democracy in the region, there are clearly areas to further improve – and respecting the Southeast Asian workers’ rights and conditions is a crucial step. It is for both universal values and Taipei’s soft power.

Ratih Kabinawa is a PhD candidate in the School of Social Sciences at the University of Western Australia. Her main academic interest is in transnational politics and Taiwan’s foreign policy in Southeast Asia. She tweets @RatihKabinawa

This article is part of a special issue on migrant workers.