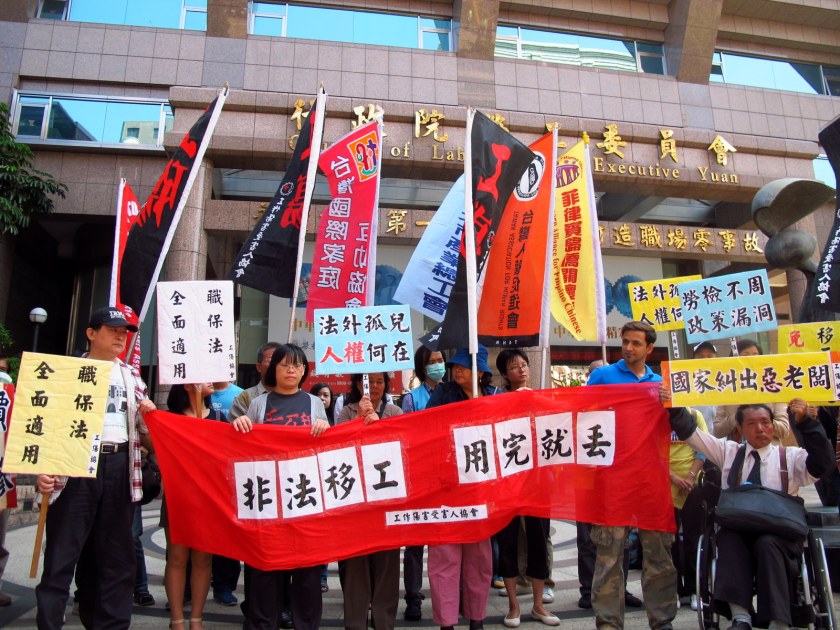 According to the US “Taiwan 2020 Human Rights Report” issued in March 2021, some labour brokers exploited migrant workers by charging them excessive recruitment fees and leaving the workers stuck with “debt bondage.” External pressure on the Taiwanese government regarding foreign workers’ unreasonable and substantial payments to brokers has persisted. And the treatment of migrant workers issue continued to be a source of constraints given Taiwan’s limited international space.

The calls to abolish the predatory labour hiring system remain resounding. Yet, the Tsai government remains taciturn on any potential changes towards the long-lasting controversial issue. The government cannot intervene in the free market, and the employers have the right to choose the way they hire, the Ministry of Labour claimed. This statement demonstrates a clear sign of the neoliberal shift in the ruling Democratic Progressive Party (DPP).

Some initiatives have been undertaken, but Taiwanese employers are generally not well-received. For example, the Taiwanese government did step in to help migrant workers and employers by launching a “Direct Hiring Service Centre (DHSC)” in December 2007. However, the Centre exists in name only due to employers’ reliance on placement agencies and brokers. In 2018, only 1.13% of employers turned to the DHSC. For employers, direct hiring procedures are complex and time-consuming. Additionally, they have been reluctant to engage in a straightforward hiring process given a series of complex laws and regulations.

In October 2021, Taiwan’s Minister of Labour Hsu Ming-chun (許銘春) said that her ministry would launch an online platform to help migrant workers self-submit their documents. The simplified platform is expected to be up by the first half of 2022, and this could be considered as a move to mitigate illegal fees charged by unscrupulous labour brokers. In addition, the new online platform could prove beneficial in helping migrant workers apply for documents by themselves. However, it is unlikely that this initiative could solve the issue of migrant workers being vulnerable to exploitation and charged with substantial fees.

It is high time the Taiwanese government revised the labour system as the untransparent recruitment procedure has led to huge, unjust, and sometimes illegal fees paid for brokers. This financial burden has been haunting migrant workers, who could hardly pay out exorbitant fees within a short time due given their modest salary.

There have been recent calls from DPP legislators Michelle Lin (林楚茵), Hung Sun-han (洪申翰), and Lai Pin-yu (賴品妤) urging the Ministry of Labour to crack down on brokers that charged illegal fees or extorted migrant workers, such as keeping migrant workers’ access to essential documents and asking for extra money if these workers want to get their papers back. The three legislators further said that these atrocious brokers should meet severe penalties while also calling for simplified procedures and instructions to protect the rights of migrant workers. Unfortunately, though these calls are crucial and timely, the Tsai administration has not paid enough attention to complaints and demands from both migrant workers and legislators.

What should the Taiwanese government do?

Amid complaints filed by domestic migrant workers, how could the Taiwanese government solve the lingering issue surrounding the labour brokerage system? The central issue that the Tsai Ing-wen (蔡英文) administration should consider would likely be reassessing its labour brokerage policy.

The Tsai government should consider a transparent and values-oriented approach. “The clock is ticking,” asserts Dr Bonny Ling, an experienced practitioner-scholar working on human rights and migrant workers at the UK-based Institute for Human Rights and Business (IHRB), as countries like Japan and South Korea “know what is going on in Taiwan,” and might encourage more Southeast Asian migrant workers to work in their countries instead. Facing a declining birth rate and the issue of population ageing, the Japanese government amended the immigration law to welcome more migrant workers in 2019. Japan also offers high wages, possible residency, and free accommodation for Southeast Asian workers. On its part, South Korea built government-to-government trade agreements with foreign counterparts, and by doing so, ran government-owned agencies in each country. As the two middle powers are shifting their focus to Southeast Asian migrant workers, the edge of Taiwan is narrowing.

As Taiwan may lose the migrant worker labour supply to its neighbours, weakness should be turned into an opportunity. Put differently, this is a golden time to revise the brokerage system by offering a transparent and safe system for migrant workers to reach out. However, abolishing the broker system seems not easy as the Taiwanese government has to rely on brokers and agencies for hands-on tasks, especially those referring to languages and legal procedures in migrant workers’ countries.

Suchawadee Japue, who has worked at a Taipei-based employment service agency for one year, told the authors that brokers frequently manipulate the fees to make extra profits. However, she said that migrant workers need brokerage firms for basic services, like applying for or renewing Alien Resident Certificates, doing medical check-ups, or documentation.

As underlined by Dr Ling, “the policy is not right though it is legal.” As many migrant workers are running up huge debts, the broker system arguably does not support their rights.

Essentially, a scheme towards a more transparent system with reasonable fees is viable and imperative. The Tsai government could think of an updated labour policy where employers shoulder the service fee with migrant workers. The government could also provide migrant workers with financial support for service fees, like accommodation or translators.

The Taiwanese government should recognise the positive development effect of remittance and consider it an important contribution to foreign workers’ families. Each dollar paid to brokers should be turned in one dollar sent by migrant workers to their families, eventually turning these transfers into money invested in humanitarian assistance. Migrant workers’ rights should be framed as a constituent of human rights. Earnings and profits are important, but human capital development should be considered as a long-term and multidimensional benefit, which involves supporting migrant workers’ families, enhancing educational opportunities in their countries, and tackling child labour in rural areas. When viewed through this lens, the dignity and safety of migrant workers should be a central issue of concern for human rights, which Tsai underscored in her speech at the 14th Asia Democracy and Human Rights Award ceremony in December 2019.

As aptly put by Dr Ling, the Taiwanese government should embrace the motto of “labour protection for every people” when coming to the problem of migrant workers, and the incumbent administration could study experience from European countries by bringing human dignity and legal compliance together. Taiwan has become more dependent on foreign labour for consumer electronics and the eldercare industry, particularly amid the COVID-19 pandemic. As migrant workers are becoming an inseparable part of Taiwanese society, the Tsai government should listen to their voices and support them in a more meaningful way.

In addition to administrative guidance, the Taiwanese government should engage more by conducting fieldwork and deploying resources to help migrant workers. Chuang Kuo-liang, of the labour ministry’s cross-border workforce management division, said that “few migrant workers are fully informed of their rights, or have the means to defend them. Moreover, without the right to vote, they have no political sway, making them easy to ignore.”

Enforcing the inspectional system on brokerage agencies, imposing effective sanctions against illegal and irrational fees and malfeasance on overseas workers, reaching to migrant workers directly with language assistance, and equipping them with legal and educational rights and tools should be among priorities of the Tsai administration.

The Taiwanese government should enhance ties between the public and private sectors. An open-minded embrace of opinions, suggestions and even criticisms from overseas workers, migrant workers advocacy groups, activists, non-governmental organisations (NGOs), and experts in human rights and legal rights for migrant workers could help the incumbent administration develop pragmatic policies.

The democracy in Taiwan is far from perfect, but its government could step up efforts to make the archipelago a liveable destination for everyone, including migrant workers. Now the issue of migrant workers–having been neglected intentionally by Taiwanese politicians for so long–should be included in the government’s political agendas as an indispensable constituent of democratic practices. A year ahead may be full of both challenges and opportunities for the Tsai administration when supporting migrant workers.

Huynh Tam Sang is a lecturer of the Faculty of International Relations at Ho Chi Minh City University of Social Sciences and Humanities and a research fellow at the Taiwan NextGen Foundation.

Wen-Chin Cheng is a junior researcher at the Taiwan NextGen Foundation.

This article was published as part of a special issue titled ‘Taiwan 2022: Reflections, Predictions and Trends”.