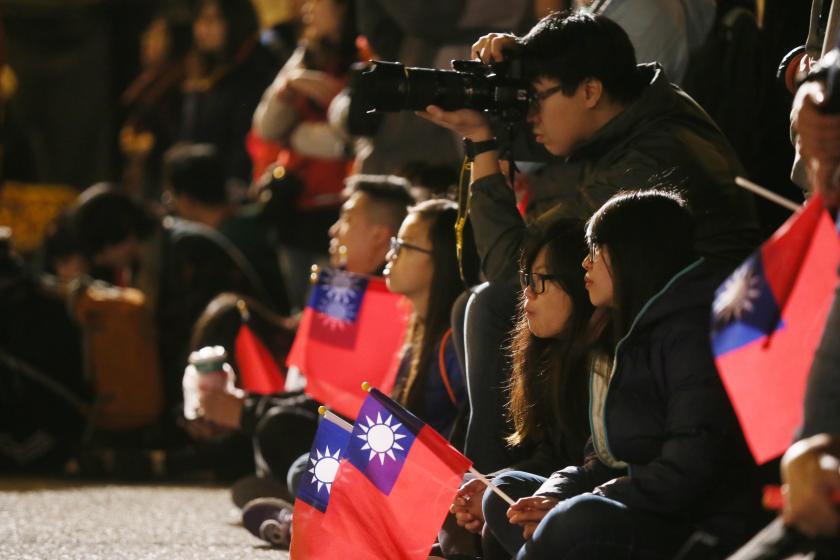 This article is republished from Medium. Read the original article.

Image credit: The ROC’s 2017 New Year flag-raising ceremony in front of the Presidential Office Building by Office of the President, Republic of China/Flickr, license: CC BY 2.0

The political conflict between China and Taiwan has existed since 1949. The current government of China, officially called the People’s Republic of China, has been established since 1949. On the other hand, the government of Taiwan, officially the Republic of China, was established by Sun Yat-Sen in 1912. In fact, both countries originated in Mainland China. However, after the Chinese Civil War (1927 to 1950), the China government was split into two parts led by two political parties, the Kuomintang of China and the Communist Party of China. The Kuomintang retreated to Taiwan, and the the Communist Party founded the People’s Republic of China.

During the early 1700s, pirates had begun to control the Pacific trade routes, so the Qing imperial government, which ruled Mainland China, blockaded all the ports in China in order to fight against the pirates in the Pacific. At that time, China exported a variety of goods to Britain such as tea, ceramics, and silk, causing Britain’s trading economy to sustain a large trade deficit. In an effort to reduce the trade deficit, the British government sent representatives to China to negotiate a trade treaty to export British goods to China. However, the Qing imperial government rejected their request and maintained the blockade. Merchants began to smuggle Opium from England to China. In 1840, merchants from Hong Kong, which was colonized by the British, sold Opium from armed ships in the Pacific. The Qing imperial government tried to arrest them, causing the first Opium War to start between China and the British. China ultimately lost the war and signed the Treaty of Nanking, agreeing to open Chinese ports to British trade. Thereafter, Britain began to export its goods including Opium.

During the early 1800s, due to the blockade, the Qing imperial government rejected any new technology and knowledge from the West. Therefore, China’s military was equipped only with basic weapons such as knives and swords, rather than the guns or artillery shells that had been developed in the industrial revolution. Also, after Opium was imported in China, most Chinese were addicted to Opium, which resulted in low productivity in China. At this moment, other countries in Europe discovered China’s vulnerability, especially after the first Opium War. As a result, during the 1800s, China was a target of these European countries and was forced to sign a variety of unequal treaties with different countries. For example, in 1843, China was forced to sign the Treaty of the Bogue, a supplement of Treaty of Nanking, promising permanent normal trade relations with Britain and consular jurisdiction for all Britain.

In China at that time, people suffered from not only Opium but from wars. In 1899, the Boxers, a secret organization, convinced people that if they joined Boxer Rebellion, they would be protected against foreign aggression. Therefore, people who were disillusioned and desired to change their circumstance were attracted to the Boxer Rebellion to defend themselves. The Boxer Rebellion grew into an army. However, in 1900, the Eight-Nation Alliance including France, Germany, Italy, Japan, Russia, the United States, and the United Kingdom invaded China. As a result, the Boxer Rebellion was eliminated and China was forced to sign another unequal treaty, the Boxer Protocol, and paid 450 million taels of fine silver to the eight countries.

Origin — The Xinhai Revolution in 1911

During the early 1900s, people suffered from foreign aggression mainly caused by the ineffectiveness of the Qing imperial government to defend the country. General Sun Yat-Sen led the Xinhai Revolution. On January 1st, 1912, following the Xinhai Revolution, Sun Yat-sen founded The Republic of China on Mainland China. The Last Emperor formally abdicated the throne on Feb. 12, 1912, ending not only the Qing dynasty but China’s millennia-long imperial period.

However, the political situation across China was unstable as there were several separate military leaders who controlled several regions of the mainland with political power. In 1926, in order to unite China under one government, The Republic of China launched the military campaign, the Northern Expedition, against the Beiyang government and other regional warlords. In 1928, the Chinese military leader Chiang Kai-shek announced that all military governments should be ruled by one government, the National Government of the Republic of China led by the Chinese Nationalist Party, known as the Kuomintang.

The Xinhai revolution brought significant implications to the Republic of China (Taiwan) and the People’s Republic of China. Although they both consider themselves as contributors in the Xinhai Revolution and as the legitimate heirs of Sun Yat-Sen and honor the revolution including the change to a republic, they refused to recognize each other and believe that there should only be one government representing China.

In 1945, following the surrender of Japan, Civil War broke out in China. The government led by the Communist Party of China was more powerful than before, and civil war could not be avoided. After 4 years, the communists won the key battle in 1949 that decided the ruler of Mainland China. In the same year, the PRC was founded. Defeated, the Republic of China withdrew from Mainland China to Taiwan and they were not able to recover from Mainland China.

The Kuomintang of China in Taiwan (1949-Now)

In 1949, the Kuomintang of China promulgated the “Order of Martial Law” to announce imposition of Taiwan. There were a series of regulations including the regulations to prevent unlawful assembly, procession and association under martial law, as well as the regulations of publications under the martial law. During the time, the government hunted hundreds of thousands of Taiwanese due to their suspicious behaviors or words, which called “White Terror”. The Taiwanese suffered from the regulations. In 1979, the university students headed people to fight for their right of association and publication, which called the Formosa Incident. Many students were under the arrest because of the incident, which got attention in the world. In 1986, those students found the Democratic Progressive Party to fight for human right. Then, the Democratic Progressive Party, supported by the Taiwanese who mainly suffered from the White Terror and most of whom were the young generation, has been the one of the major political parties in Taiwan, against the Kuomintang of China since then.

From the Taiwanese Perspective

The Taiwanese population consists of indigenous people, people who came from Mainland China in the 18th and 19th centuries, and people who retreated from Mainland China in 1949. The different backgrounds cause people to identify themselves differently. Most of those people whose hometown is China and retreated in 1949 identify themselves as Chinese. On the other hand, most of Taiwanese who have lived there for more than a century and do not feel strongly affiliated with China regard themselves as Taiwanese. The two different opinions are revealed when people who live in Taiwan regard their nationality as either Taiwan or Chinese.

Chiung is a self-publisher for 14 novels. Current columnist at Business Review at Berkeley. As market research analyst for +4 years and R&D for 1 year in chemical industry.