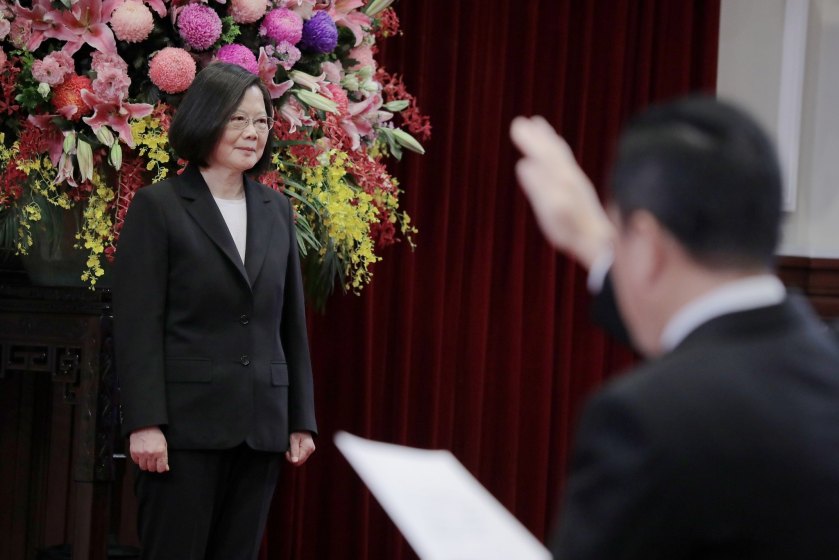 Nearing the half-year point in her second term as president it is fitting to ask: how is President Tsai faring? It is a good time for a report card.

On January 11, President Tsai won a resounding re-election victory over her KMT opponent Han Kuo-yu, the Mayor of Kaohsiung. Her party, the Democratic Progressive Party (DPP), also secured a majority in the concurrent legislative vote, though it was not as impressive as Tsai’s win. These two triumphs gave President Tsai a sound mandate to govern. Observers were optimistic about the next three and a half years.

Is Such a View Justified?

One easy way to gauge the president’s performance after five months includes examining how the media, in both Taiwan and abroad, have treated her and what opinion polls have expressed.

The press at home and abroad (except in China and a few other countries) has applauded President Tsai’s performance in office to start her second term. Tsai’s popularity according to a poll taken in February was 68.5 per cent—up by a whopping 40 per cent from December 2018. It was in the 70 per cent range in March—a very high mark for a leader in a competitive democracy. The overriding issue explaining this result was due to her administration’s handling of the Coronavirus crisis that beset Taiwan. A crisis which has beset most countries. Countless observers both at home and elsewhere viewed Taiwan’s response to the crisis as exemplary and labelled Taiwan an ideal model. They praised President Tsai for taking very effective measures to cut the number of cases and fatalities. She won big kudos for such an undertaking.

The data also speaks loudly. According to numbers provided by Worldmeters, during May, Taiwan had experienced 0.3 deaths per million residents. A staggering result compared to Belgium (the highest at 763) the U.K. at 469 and the U.S. at 257. This is amazing given the fact experts reported that more cases and deaths were to be expected (as the data was showing this) where the population is more congested and older. Taiwan is one of the most densely populated places on earth. It is double that of Japan and five-fold that of China. It is also one of the most aged populations, having suffered from a low birth rate for years.

What About the Other Measures of President Tsai’s Performance?

The economy grew at a slow pace during President Tsai’s first term. It was below the world’s average and only around a third of China’s. Nevertheless, it did slightly better during the run-up to the January 2020 election, which helped her win votes. A recent IMF report projects negative 3 per cent growth for 2020 due to the pandemic. Still, this is better than the world’s average, topping both Hong Kong and Singapore and is about the same as South Korea (Taiwan’s benchmarks).

Taiwan’s better performance is accounted for by the fact that many of Taiwan’s companies operating in China returned home owing to the U.S.-China trade feud. President Tsai cheer led this and thus deserved credit for Taiwan’s currently better than expected economic prospects.

Looking ahead, President Tsai’s plans for the economy reflect progressive ideas and more linkages with China in recognition of the fact that—according to the IMF, Kiplinger and others—China will see positive GDP growth this year. At the same time, the U.S., Europe, Russia, and Japan will experience negative growth, and China’s economy next year will grow around 7 per cent, which is double that of the others. Meanwhile, Taiwan will become economically even more integrated into the expanding Asian economic bloc. However, much depends on improving economic relations with China.

What About President Tsai’s Governance?

Politically speaking, President Tsai performed poorly after winning election to her first term in 2016. Her governance for a year or so may be described as something between below par and a disaster. This led to her party’s drubbing in the off-year election in 2018. A result that many blamed-on President Tsai for her less than skilful handling of reforms, referendums, pensions, and several other issues.

President Tsai’s image was also left wanting early in the 2020 campaign. Many in her party voiced the opinion that she and other top party leaders rigged the primary against the very popular William Lai. Moreover, some argued that this demeaned the DPP. Still, she had China’s leaders’ unsung approval as they saw Lai as a dye-in-the-wool supporter of Taiwan’s independence. The United States also perceived her this way. In fact, some Department of State officials tagged Lai as a “refreshed Chen Shui-bian” whom they called a loose cannon for his provoking Beijing to maintain the support of his base.

President Tsai’s new team at the top now includes Vice President William Lai and Premier Su Tseng-chang—a veteran politician and effective leader. They are a good fit. President Tsai appointed a new cabinet and other top leaders. Critics seem to think that this augurs well, in terms of the president’s governance in her second term. However, her relationship with party legislators is less promising. They did not do so well at the polls due to having fostered the public’s sense that they had been self-serving and not very efficient during President Tsai’s first term. President Tsai has pledged to fix this. On a better note, President Tsai promised judicial reform in her inauguration speech in May. She cited the need for more citizen participation. Such a move deserves applause.

During the 2016 election campaign, President Tsai adroitly messaged relations with the United States and continued to do so later, especially in the run-up to the 2020 election. Some in her party cautioned that President Trump might abandon her after he wrangled a trade deal with China. Moreover, there was growing anxiety owing to her erstwhile support of Hillary Clinton, not to mention the fact that she and her party’s progressive agenda were not in tune with the Trump administration’s outlook on things. But her relationship with the U.S—the only sine qua non nation to Taiwan—which she continues to cultivate, has remained very positive.

President Tsai’s relationship with China tobogganed downward during the campaign. Post-election, she continued to oppose China’s offer of one country, two systems. However, it did not have much support anywhere due to events in Hong Kong and the Western media taking an increasingly hostile stance toward Beijing.

Otherwise, relations with China have warmed in the absence of heat caused by an election campaign, and because President Tsai recognises workable cross-Strait ties are vital for Taiwan. Also, polls in Taiwan show most residents think independence means war, and without U.S. intervention Taiwan would lose.

In her inauguration address during May, she called for Taiwan and China to “coexist” and “work for stability and long-term development.” Thus, Tsai was seen by most, both in Taiwan and abroad, as a “light green” on the independence issue (compared to the dark green that steadfastly demands legal separation from China). That spells better relations with China.

President Tsai’s relations with countries around the world, which were already cordial, improved after her re-election. She personified Taiwan’s thriving democracy. Relations, however, did not improve with the United Nations or its affiliated organisations. In fact, this was quite palpable in the case of the World Health Organization, where owing to Taiwan’s handling the Coronavirus, many felt it should have a voice. President Tsai and Taiwan won a lot of sympathies while many saw WHO’s rebuff as a badge of honour for Taiwan, given its woeful corruption and incompetence.

Before the campaign, President Tsai’s image for managing relations with the military and her security policies were marred by protest from the troops after she cut their pensions. This is not to mention what some saw as her lack of affection for the military. Meanwhile, the U.S. saw Taiwan as grudging on military spending while leaning on the U.S. too much.

The huge arms deal with the U.S. just weeks before the election changed this. Critics, however, said she had paid too much—the deal was foremost intended to ingratiate her with the Trump administration as the weapons she bought were not useful for changing the balance of power vis-à-vis China. She had betrayed a promise to support the local defence industries. Nevertheless, President Trump and Congress had Taiwan’s back, and that is what matters.

In conclusion, President Tsai’s report card is a good one. She promised after re-election to be humble, try to mend relations with the KMT, get along with China, and focuses on real problems. Arguably, this reflects her pragmatic side and the fact she learned from her first term as president.

John F. Copper is the Stanley J. Buckman Distinguished Professor (emeritus) of International Studies at Rhodes College in Memphis, Tennessee. He is the author of more than thirty-five books on China, Taiwan and U.S. Asia policy, including Donald J. Trump and China published this past summer and Taiwan: Nation-State or Province? 7th edition published in December.

This article is part of special issue on the President Tsai’s second term in the office.