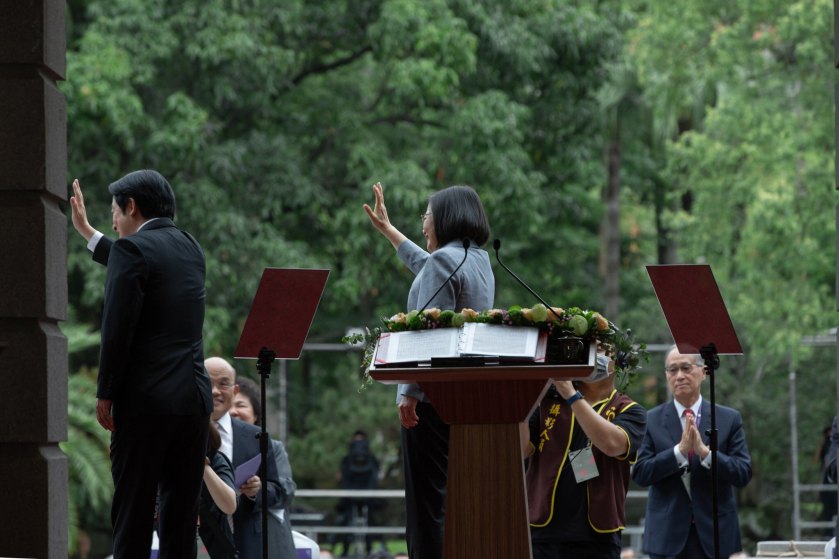 The first four years under the Tsai Ing-wen administration have brought greater clarity regarding Beijing’s attitude toward Taiwan and its democracy. Although in the months prior to her inauguration on May 20, 2016, it was still possible to imagine that the two sides could find a modus vivendi despite Beijing’s longstanding antipathy toward the Democratic Progressive Party, Beijing almost immediately adopted an unforgiving course of action which soon poisoned the relationship. Rather than set differences aside and collaborate in areas where it was possible to do so, Beijing inflexibly insisted on Taipei abiding by its preconditions of the “1992 consensus,” “one China” and “one country, two systems.” When Tsai refused to do so, the Chinese regime, spurned, launched a series of efforts to punish, isolate and intimidate Taiwan.

After those contentious four years, during which Beijing successfully convinced seven official diplomatic allies of the Republic of China (Taiwan) to switch sides while ensuring that Taiwan remained unable to join multilateral organisations within the U.N. system, Taiwan nevertheless emerged in a stronger position internationally—even before the COVID-19 pandemic made Taiwan the object of positive headlines worldwide. Changing attitudes globally to an increasingly assertive and repressive China, and the contrast in which such developments put democratic Taiwan, contributed to Taipei’s success in establishing stronger ties, albeit unofficial, with significant democracies, chief among them being the U.S., Japan, Australia, India and a handful of E.U. member states. This shift, combined with various initiatives by the Tsai administration, meant that Taiwan was able to weather—and in several instances to continue to prosper—despite a cornucopia of efforts by Beijing to undermine and isolate Taiwan.

However much Beijing may have sought to hurt President Tsai’s appeal with the Taiwanese public by inflicting pain, such a strategy backfired when, in January 2020, voters elected her to a second term with a record-breaking 8.2 million votes against an opponent who was seen by many as Beijing’s favourite.

Similar challenges await President Tsai as she begins her second term. No sooner had she been re-elected than the People’s Liberation Army increased the frequency and threatening posture of its transits and exercises, and there is every reason to believe that the Chinese will act upon their threat to further isolate Taiwan by poaching more, if not all, of its remaining official diplomatic allies. Meanwhile, there is every indication that Beijing will continue to rely heavily on a policy of political warfare against Taiwan intended to erode its democratic institutions and support therein, “Lebanonize” its society through co-optation, exacerbate polarisation through disinformation, and undermine social stability through reliance on several sub-state actors, among them pro-unification entities as well as crime syndicates.

Given a strong second mandate, President Tsai, furthermore, has various tools at her disposal to empower intelligence and law enforcement agencies, as well as the courts, to counter Chinese political warfare, although here, like any threatened democracy, her government will have to ensure that national security measures do not end up eroding the very democracy they seek to protect.

Despite an unusually favourable international environment, which made it possible for Taiwan to counter Beijing’s efforts to isolate it during Tsai’s first term, her second term begins on a note of uncertainty given the weakened position in which much of the global community finds itself as it struggles to contain COVID-19. Moreover, while it remains impossible to fully assess the costs and ramifications of the outbreak in China, Beijing has endeavoured to rewrite the history of the pandemic by using propaganda to reposition China—hubristically, some would argue—as a global leader near the height of its power. Already healthy under Xi Jinping, such appeals to nationalistic sentiment have created worries that Beijing may seek to exploit this fleeting moment of weakness within the democratic world to create facts on the ground. Its recent activities in the South China Sea, added to the sudden passage of a new national security law by the National People’s Congress to address instability in Hong Kong, have fueled such speculation. Having shown strength over Hong Kong, and in doing so defying several senior officials within the Chinese Communist Party, Xi has created expectations from which it may now be difficult to back down.

Consequently, in light of the failure of China’s efforts to encourage “peaceful unification” with Taiwan, along with the counterproductive effects of its sharp power strategy over the past four years, hawkish elements within the CCP and the PLA have increasingly clamoured for a military solution to the conflict. Added to ultranationalist internet armies, which have embraced genocidal terminology to describe Taiwan’s fate with worrying frequency—and the view that, after Hong Kong has been neutralised Taiwan ought to be next—there are worries that the current mood in Beijing may be ill-conducive to de-escalation in times of crisis, if not more amenable to adventurism in the Taiwan Strait. Another scenario to consider is the possibility that China’s economy may have been badly hurt by COVID-19 and the trade war with the U.S., thus compelling Xi and others in the CCP to turn to externalisation: blaming China’s current travails on foreign forces which seek to destabilise China, and Beijing consequently being “forced” to react “defensively.” Although there are still some voices in China opposing the use of force against Taiwan for the time being (often due to fears surrounding lack of capabilities rather than outrightly against such a course of action over moral principle), hawkish voices have been in ascendance and risk crowding out more moderate appeals.

The Tsai administration will also need to strike a proper balance between its humanitarian impulses vis-à-vis the people of Hong Kong, thousands of whom are likely to seek political asylum in Taiwan, and ensuring that this policy does not elicit disproportionate retaliation by China.

Such a context poses various challenges for the Tsai administration. Given how unlikely Beijing is to respond to her olive branches, her administration will, therefore, have to focus on further integrating Taiwan into a web of influential democracies while increasing its deterrence capabilities to avoid PLA adventurism. Among other things, this will require further reforms to make Taiwan an attractive destination for foreign investment, amendments to existing regulations to facilitate the establishment of international non-governmental organisations, as well as proactive measures to encourage foreign media to relocate to Taiwan as the environment becomes increasingly problematic in China. Taipei will continue to collaborate with the U.S. on the successful Global Cooperation and Training Framework (GCTF) mechanism and other initiatives. Increasingly official in nature, such Track 1.5 and Track 2 efforts have in recent years also attracted other countries, namely Japan, Australia and Sweden, thus expanding the network of democracies in which Taiwan plays an integral role. During its second term, the Tsai administration will have every advantage in seeking to widen the scope of such bi- or multilateral fora, either through GCTF or, if necessary, alternative models. Taiwan must also continue to seek membership in various security fora and to play a more visible role within those that limit membership to democratic countries (e.g., the Halifax International Security Forum, in which it participated in 2018 and 2019). In conjunction with other partners, Taiwan must continue to promote democracy, good governance, and religious tolerance within the region and around the world. And it must continue the consolidation of such values at home. More considerable resources should also be put into developing a coherent, coordinated and effective public diplomacy campaign at the global level to counter Chinese propaganda regarding Taiwan and thereby shape the environment in its favour. It should also deepen its efforts to make its case as one worthy of bipartisan support rather than being limited to traditional partners on the conservative side of the political spectrum.

While not altogether abandoning efforts to join specialised U.N. agencies, Taiwan should seek to develop, in concert with other democracies, alternative mechanisms for the timely exchange of information. At the same time, it should collaborate with other countries in seeking to reduce the undue influence which China has developed within the entire U.N. system.

On matters of national defence, Taiwan will continue to strengthen its ability to deter a Chinese attack, with a premium on asymmetrical capabilities, sequential air defence, and C4ISR architecture hardening and redundancy. Besides high-profile acquisitions from the U.S., such as the F-16V multirole combat aircraft and M1A2 main battle tanks, Taiwan is expected to deepen its investments in the development, acquisition, and deployment of dispersible and highly mobile missile launch platforms, while establishing a sufficient counterforce capability (e.g., land-attack cruise missiles with extended range) to strike military targets on the Chinese side of Taiwan Strait. As the PLA continues to modernise and augment its amphibious and expeditionary capabilities, Taiwan will have to respond commensurately with proper investments in anti-ship missiles, coastal defence platforms (manned and autonomous, the latter particularly on outlying islands) and satellite-based or UAV-assisted intelligence collection. A significant effort should also be made to properly train and configure Taiwan’s reserve force, which in its current iteration is not suited to counter a major invasion force. Every effort should be made to further collaboration and interoperability with the U.S. military and other regional players, chief among them Japan, to increase the deterrent against an unprovoked Chinese attack. At the political level, Taiwan should work with its allies and partners in reducing the ambiguity which to date has characterised their stance on the Taiwan Strait by making it more apparent that an attack on Taiwan would prompt a response by those countries. Taiwan’s law enforcement and intelligence agencies will need to be prepared to act against potential fifth column forces in the lead-up to an offensive by the PLA to neutralise efforts at sabotage and decapitation.

Finally, amid all this, President Tsai will need to retain her appeal to the largest common denominator in Taiwan, which is the surest way to avoid the fragmentation of society and disunity which can only benefit Beijing. This implies avoiding the lure of giving in to more maximalist elements within society, such as those advocating for change in the country’s official nomenclature or a declaration of de jure independence. Resisting such temptations, while resulting in criticism domestically, will continue to reassure Taiwan’s partners abroad, who over the past four years have welcomed the rational and pragmatic approach taken by the Tsai administration. As always, the Taiwanese president must keep a number of variables in equilibrium. And she must be ready to react accordingly when the external environment changes. Thus far, the Tsai administration has demonstrated an ability to do so.  The next four years promise to be just as challenging, if not more so, as uncertainty over China’s trajectory and the state of the world in the wake of COVID-19 casting a long shadow over the international system.

J. Michael Cole is a Taipei-based senior fellow with the Taiwan Studies Programme at the University of Nottingham, the Global Taiwan Institute in Washington, D.C., and the Macdonald-Laurier Institute in Ottawa. His latest book, Cross-Strait Relations Since 2016: The End of the Illusion, was published by Routledge in March.

This article is part of special issue on the President Tsai’s second term.