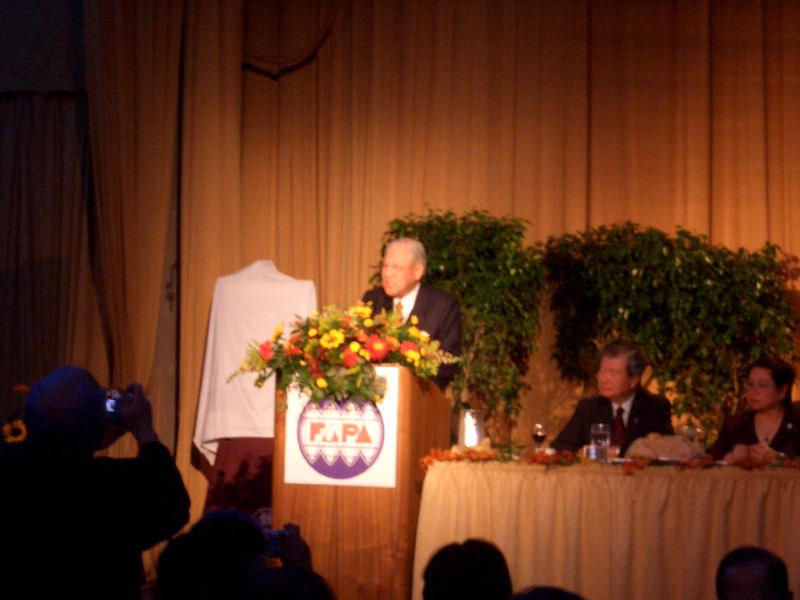 Being sponsored by the University of Hawaii’s East West Centre, in 1963, I journeyed to Taiwan to further my study of Chinese. It was here that I first heard of Lee Teng-hui, who was one of the experts that designed and operationalised Taiwan’s well-known and eminently successful land reform program.

Little did I know that Lee would become one of modern Taiwan’s foremost leaders and someone I would meet and learn much more about in coming years.

Lee Teng-hui was born in rural, northern Taiwan in January 1923. Taiwan was a colony of Japan at the time. Lee graduated from high school with honours and received a scholarship to attend Kyoto University, one of Japan’s finest. When the war ended, he stayed in Japan to finish his college degree.

He then returned to Taiwan to attend National Taiwan University. At the time, Lee joined an organisation called the New Democracy Association, which was affiliated with the Chinese Communist Party. When asked about this later, Lee admitted that he had been a Communist briefly, but learned it was not for him or for Taiwan. This might have been a career breaker had not President Chiang Ching-kuo had a similar experience.

In the early 1950s, Lee travelled to the United States to study. He received his master’s degree from Iowa State University. Whereupon he returned to Taiwan to take a job with the Joint Commission on Rural Reconstruction. After a few years, he once again went to the U.S., this time for a doctorate in agricultural economics from Cornell University, one of America’s fine Ivy League institutions. His PhD. thesis was entitled “Intersectoral Capital Flows in the Economic Development of Taiwan, 1895 to 1960.” It was named the best doctoral thesis that year by the American Association of Agricultural Economics. It was subsequently published as a book with that same title.

After Lee returned to Taiwan from the U.S. the second time, he joined the Nationalist Party or Kuomintang (KMT). Not long after this, he was made a cabinet official without portfolio responsible for agriculture. In 1981, President Chiang Ching-kuo appointed him mayor of Taipei, Taiwan’s largest city. Furthermore, he was named governor of Taiwan Province.

I had the opportunity to interview Mayor Lee and also Governor Lee. I found him humble yet dynamic. Also smart and perceptive. I asked him questions about Taiwan’s politics and the problems he encountered in his work. He was forthright. He obviously had vision. I thought at the time he was truly a man with a future.

How correct were my observations! In 1984, after President Chiang Ching-kuo had gotten to know Lee well, he picked him to be his vice president. The National Assembly promptly elected him to that position.

Nevertheless, it was not that simple as among the Taiwanese was a minority group called Hakka. Lee Teng-hui was Hakka. Hakkas early on lived in north China. They then became itinerants something like the Jews in Europe. They were renowned for their abilities as political and military leaders. Sun Yat-sen, the founder of Republican China, was Hakka. The two outstanding Chinese leaders at this time were Hakka. Deng Xiaoping, who adopted free-market economics and free trade and made China an economic success that transformed it into a superpower, was Hakka. So was Lee Kuan Yew, the prime minister of Singapore, the number one country in the world in education and good government.

Hakka’s, thus, thought more in terms of a greater China than others. They also got along with the KMT better than the Fukien Taiwanese, with whom they had had conflicts throughout Taiwan’s history.

In January 1988, President Chiang Ching-kuo passed- away. According to his wishes and provisions in the Constitution, Lee became president. However, many of the top members of the KMT did not want or trust a Taiwanese to be president. They colluded, though unsuccessfully, to prevent him from also becoming chairman of the party in order to limit his power and authority.

In July, President Lee’s status as head of the party was confirmed at the KMT’s 13th Party Congress. I was honoured to receive a guest invitation. For myself, the milieu was telling. President Lee sans serious opposition would lead Taiwan. He would also bring profound change. The two features foreigners talked about the most were his team being half Taiwanese and its terrific level of education. The cabinet came to be known for how many were American PhDs.

In 1989, students in Taiwan supported their counterparts in Tiananmen Square, in spirit but not with money or weapons. They gathered in Taipei. President Lee met with them and talked about democracy and needed reform in Taiwan. However, he did not seek to isolate China. Instead, he spoke of the reality that Taiwan and China were both members of the Pacific Rim bloc.

In early 1990, President Lee was re-elected to a six-year term in an election contested by three other presidential candidates. Lee’s opponents charged he was dictatorial, appointed too many Taiwanese (or not enough) to high office and could not handle all of the requirements of the job. His accomplishments and his popularity, however, gave him an easy win.

That summer President Lee convened a “town hall-style” meeting called the National Affairs conference to discuss needed and far-reaching political reforms, including directly electing the president and the mayors of Taipei and Kaohsiung, reorganising the National Assembly and fixing the relationship between the president and the premier. The following March the National Assembly amended the Constitution to formalise the central issues debated at the Conference and make the Control Yuan a semi-judicial organ of government. The Taiwan Garrison Command was abolished.

The next year Taiwan held its first non-supplemental election, a plenary election of the National Assembly. A similar election of the Legislative Yuan followed. Now neither represented all of China—which many opined was a significant obstacle to Taiwan becoming a real democracy. At this time, a Six-Year Development Plan was announced to place Taiwan among the top 20 nations in the world in per-capita income. President Lee also terminated legislation concerning liberating China, thus officially ending their state of war.

Some issues were more difficult for President Lee to handle. The KMT became divided over his push for “Taiwanisation” and its alleged corollary, independence versus unification with China. In August 1993, those in the KMT opposing Lee formed the New Chinese New Party that later became the New Party. President Lee also experienced difficulties with China, whose leaders saw him as seeking a legally separate, sovereign Taiwan. They expected to increase their grip over Taiwan, owing to China’s hyper rapid economic growth that made it a contending world power.

In 1995, cross-Strait relations worsened when President Lee returned to his alma mater to speak. He applauded American democracy and talked of his religion. (Lee was Christian.) He made a pitch to the United States to support Taiwan. Beijing reacted with intimidating missile tests near Taiwan’s shores. In 1996, China’s military repeated the performance as a prelude to Taiwan’s first direct election of its president and President Lee seeking re-election. This brought the U.S. into the fray on Taiwan’s side with aircraft carriers and the biggest show of military force since the Vietnam War.

President Lee won re-election with more than half of the popular vote despite competing with three other candidates. He was acclaimed the first Chinese top leader anywhere, or at any time, that won high office in a direct, democratic election. This was historic. I wrote about the election as I had all of Taiwan’s national elections since 1980. I also expounded about the cross-Strait flashpoint in another book entitled Playing with Fire: The Looming War with China over Taiwan.

The next year, 1997, I travelled to Taipei for a very special reason. I was honoured to be the recipient of the government’s International Communications Award for advancing understanding of Taiwan and its place in international affairs. I met and spoke to President Lee again.

My wife accompanied me on this trip. To her good fortune, she was able to meet her great uncle for the first time. He had been Taiwan’s Postmaster General under President Chiang Ching-kuo and President Lee for several years.

In 1999, President Lee was approaching his 12th year as president. He decided not to run again. He announced that his vice president, Lien Chan, should be his successor. Lien was eminently qualified: a PhD in political science from the University of Chicago, having served as the youngest minister ever in Taiwan’s government and having experience as vice president and premier. Nevertheless, Lien was not so popular with voters as James Soong, who also had an American PhD (from Georgetown) and had been a well-known and widely liked governor of Taiwan.

In the public opinion polls, Soong outshined Lien and also Chen Shui-bian, the nominee of the opposition Democratic Progressive Party, by significant margins. Still, President Lee stuck with Lien. This was a mistake, as it split the KMT and forced Soong to run as an independent. Chen’s party was behind him, and he won the election, though Soong won more votes in all parts of Taiwan save the rural south. Soong also won among women, young people, better-educated voters and minority groups.

As president Chen faced a divided government, the KMT still controlled the legislature. To govern, President Chen perceived he needed money; serious corruption was the answer. He reckoned he had to keep the support of his ethnic group, the Fukien Taiwanese, prompting him to play ethnic politics and stoke ethnic enmity. Finally, Chen required an enemy; he thus provoked China with talk of a separate (from China) Taiwan. He alienated the United States in the process. Washington perceived President Chen wanted to start a conflict between the U.S. and China to save his presidency.

Out of office, President Lee broke his ties with the KMT and became the driver behind forming a new political party, the Taiwan Solidarity Union. He and his party opposed Taiwan’s reunification with China. He continued to be a participant in Taiwan’s politics as its “elder statesman.”

Summing up, President Lee’s life mirrored the transformative time he lived and the unprecedented challenges he and Taiwan faced. He experienced setbacks and made mistakes. However, his correct decisions and his contributions were overshadowing. In consequence, opinion surveys were done in Taiwan asking residents to name Taiwan’s best presidents; Lee ranked number 2—behind only President Chiang Ching-kuo.

Lee Teng-hui known for his pragmatic diplomacy and widely remembered for his historic contribution to Taiwan’s democratisation, passed away on 30 July 2020. This article is part of special contribution to the passing of Lee Teng-hui.

John F. Copper is the Stanley J. Buckman Distinguished Professor (emeritus) of International Studies at Rhodes College in Memphis, Tennessee. He is the author of more than thirty-five books on China, Taiwan and U.S. Asia policy, including Donald J. Trump and China published this past summer and Taiwan: Nation-State or Province? 7th edition published in December.His forthcoming book is entitled Taiwan’s Politics in Action: Struggling to Win at the Ballot Box.