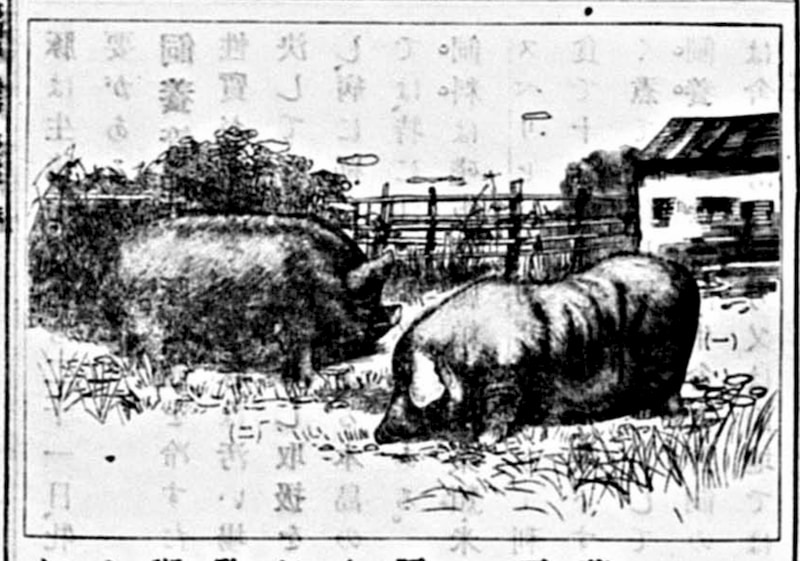 As ports opened up in Northern Taiwan at the end of the 19th century, exports of tea increased significantly, which helped start an economic boom across the island. What is less known about this period is that, as more of Taiwan’s workforce entered the tea industry, the number of people involved in raising pigs significantly decreased. Following the ports’ opening in the north to engage in business with foreign parties, and the island’s designation as a province, Taiwan experienced significant population and economic growth.

The demand for pig and pork products increased, but businessmen had begun to import pigs from across the strait since supplies have dwindled. As refrigeration technology was still in its infancy at this point, live pigs were imported. However, many overdue would die on the journey to disease or ship wreckage. In response to this, Taiwan’s first-ever insurance company was founded for protecting against pig loss.

Despite foot-and-mouth disease, African swine fever was not an issue at the time. However, swine lung disease and swine erysipelas did pose a serious threat. To deal with this risk of infection, the governor of Taiwan limited the import of live pigs to the two ports of Tamsui and Keelung and established quarantine stations in both locations. Ever since the Qing-era, pig imports operated from Tamsui and Keelung. Furthermore, during the Japanese era, these two ports became Taiwan’s two largest pig distribution centers.

Across Taipei, slaughterhouses kill many pigs daily, but this is still insufficient to feed the city’s population. Only continual imports from Quanzhou (Fujian province) and Wenzhou (Zhejiang Province) can produce enough pork. If imports are delayed by a month or two, prices will surely rise in response. (January 10th, 1899 “Taiwan Daily Newspaper”)

Simultaneously, as this report came out, the Taiwan government started to place a 10% import tax on pigs. Following this, pig imports slowly started to decrease from around 53,000 in 1899 to 29,000 just two years later. Despite this, extending into the Japanese era, pig imports from China exceeded over 10,000 a year. However, starting in 1906, more and more were imported from Japan. In response to this growing industry, some businessmen in Taiwan created a whole new type of insurance: livestock insurance. The development of insurance in Taiwan began when ports were being opened in the late Qing. At that time, the main form was insurance backed by foreign firms and Chinese merchants.

That being said, we should not overestimate how widespread insurance was in Taiwan at this time. Insurance was mostly restricted to cargo or ships traveling overseas, and such insurance was limited to treaty ports in the North and South. Although steamships had become increasingly important since the 1880s, most tradesmen could not afford to invest in one, and Chinese-style junk-ships remained the most common method for importing pigs. Such ships were outside the remit of insurance plans that existed at the time. The risks of shipwreck, and the risk of disease, became the two greats challenges to importing pigs. Thus, with pig deaths so common, some businessmen would carry containers with salt. If a pig died, it would be dismembered on the ship, covered in salt, and sold later as cured meat.

In 1900, The Taiwan government permitted the establishment of “Taiwan livestock insurance corporation” (TLIC), Taiwan’s first home-grown insurance company. TLIC was a joint Taiwanese-Japanese venture operated by Dadaocheng District Mayor Lin Wangzhou and Imazumi Lixing. The venture operated out of TLIC with a branch in Tamsui. This company only provided cover for pigs dying from disease during travel and not those that died of shipwreck, as they were unwilling to offer up such large payments.

From the application materials TLIC submitted when it was founded in 1900, the extent of the issues caused by pig disease was clear. Over the previous three years, the price of pig had already increased by over 70%, and [there was clearly a great demand from importers to protect their products].

From August 1900 to January 1901, TLIC provided insurance to over 10,000 pigs, one cow and one goat. The corporation had exclusive use of the Taiwan government’s data in setting prices, which allowed it to calculate the percentage of imported pigs dying from disease. The calculated risk of death was 1%, and based on this figure, TLIC started to offer compensation up to 80% of the price of pig and a base insurance premium of 3%. This could increase (up to 5%) or decrease depending on how many pigs died. Although the company did not offer pay-outs if pigs died for other reasons, they did offer to refund the premium in full in such instances. After a strong start and a business model based on robust data, the company’s shareholders considered opening up a Keelung branch in 1902. TLIC’s stocks offered an impressive 20% dividend to stockholders.

Despite this, just three years later in 1905, TLIC abruptly disbanded. The shock was caused by the Taiwan government’s promotion of local pig farming, which caused local farming to take off and reduced the need for pork imports. Aware of this challenge – and with profits beginning to dip – the shareholders at TLIC decided to quit whilst they were ahead. The five-year rise and fall of the TLIC reflect the economic transition that accompanied the end of the Qing dynasty and the beginning of Japanese rule in Taiwan. To finish, a quote from the Taiwan Daily Newspaper in 1909:

“At the beginning of the Japanese period, there were significant pig imports from the ports of Keelung, Jiugang, Houlong, Tu Gehori, and Dagou. Year after year, this became less common, and now pigs are only imported through Tamsui. This is due to the development of the internal pig-farming industry, but also the high taxes placed on import. It is suspected that the import of pigs will come to an end over the next two to three years.”

Ko Lien received his Master’s Degree from History at National Cheng Kung University. Lien has focused his research on Taiwanese economic, financial and insurance history. You can find and purchase his book on the topic here.