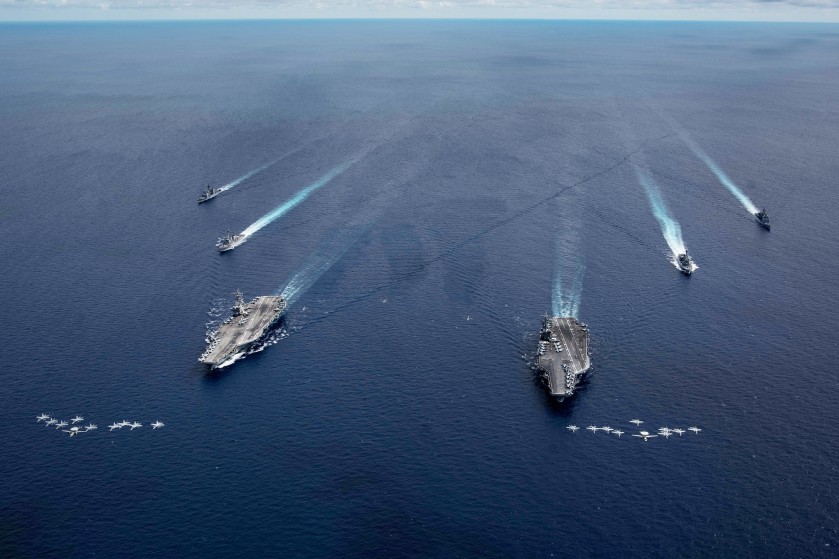 A recent cover story in The Economist referring to the Taiwan Strait as “the most dangerous place on earth” has caused mixed reactions in Taiwan and elsewhere.

While the headline was certainly alarmist—one can imagine more dangerous places than Taiwan to be in, from Yemen to Afghanistan, Somalia to some neighbourhoods in Mexico, for example—the article nevertheless reflects the reality that no other geopolitical flashpoint today is as likely to spark major armed conflict than the Taiwan Strait. China has shown much greater hostility in the past year. The two U.S. successive administrations, led by presidents Trump and Biden, have elected to counter China’s destabilising assertiveness by increasing U.S. military activity in and near the Taiwan Strait and deepening their engagement with democratic Taiwan.

The mix of hubris and ultranationalism animating the Chinese Communist Party (CCP), combined with frustration with the unwillingness of Taiwan’s 23.5 million people to yield to Chinese pressure, has led Beijing to abandon all pretence (official declarations notwithstanding) of pursuing “peaceful unification” with Taiwan and putting greater emphasis on military coercion. More and more, the CCP is signalling that it is perhaps on the brink of coupling capabilities with intent in the Taiwan Strait and to do the unimaginable by launching an assault to annex Taiwan.

Besides the intensifying frequency of intrusions by PLA Air Force and Navy aircraft in Taiwan’s southern air defence identification zone (ADIZ)—and the tacit median line separating the Taiwan Strait—the PLA has continued to modernise its forces and deploy military transport ships. These include the Yuzhao-class Type 071 LPD and Yushen-class Type 075 amphibious assault ship to carry soldiers, tanks, and attack helicopters across the Taiwan Strait.

These developments have led some U.S. military officers, including the former chief of the U.S. Indo-Pacific Command, Admiral Phil Davidson, who retired in April, to warn that China could launch major military operations against Taiwan within the next six years. Davidson, quoted in The Economist article, did not explain why he has reached such an assessment. One possible explanation is the symbolic significance of 2027, which will coincide with the PLA’s centenary anniversary. (Some analysts have posited that 2027 is the date by which the Chinese armed forces are to have achieved complete military modernisation, a goal that was initially set to 2035. However, nothing that was said at the Fifth Plenum of the 19th Central Committee of the Communist Party, when that year was mentioned, to indicate that 2027 constitutes a new benchmark.)

The speculation about an imminent Chinese attack on Taiwan has reignited the debate over whether the CCP—with CCP General Secretary Xi Jinping serving concurrently as head of the Central Military Commission (CMC)—can be expected to act rationally regarding Taiwan. Critics of the recent alarmism argue that the recent uptick in military activity and martial language is little more than psychological warfare against Taiwan. To read more into it inadvertently exacerbates the effects of this campaign upon the Taiwanese public and troop morale in Taiwan. Interestingly, some of the more vocal proponents of abandoning Taiwan—among them Australian National University’s Hugh White and the U.S. Naval War College’s Lyle Goldstein—appear to have internalised the propagandistic elements of China’s military signalling. Moreover, they have been using the PLA’s ostensibly overwhelming might to justify why the U.S., along with the international community, should abandon Taiwan to its fate.

According to the more optimistic analysts, Xi will continue to rationally calculate the costs versus benefits of taking military action against Taiwan and assess that calamity risks would be too high. Some have also argued that rational decision making is why, despite decades of threatening Taiwan, China has never actually used force against its opponent and why it will continue to show restraint.

All this might be true. However, there are some weaknesses in this argument. For one thing, Chinese military restraint in recent decades has also resulted from a lack of capabilities on the PLA’s part. Thus, even if Beijing intended to initiate major hostilities against Taiwan, PLA generals would have informed the Chinese leadership about having sufficient capabilities to ensure a victory against Taiwan, let alone in a contingency in which the U.S. military was drawn in.

The optimistic argument also does not consider the nature of Xi’s megalomania and the impact that his personality may have had on decisions pertaining to war and peace. If previous authoritarian and totalitarian regimes are any indication, we can assume that Xi, like other despotic leaders before him, is not receiving all the intelligence he needs to make enlightened decisions on matters of war and peace. Or rather, that his advisers and intelligence officers may only be feeding Xi information that supports his assumptions.

One final element that should caution us against expecting continuity in the Taiwan Strait is the growing perception within China that the U.S. is in irreversible decline and that China is, therefore, in unstoppable ascendency. Chen Yixin, a close confidant of Xi who serves as Secretary-General of the Central Political and Legal Affairs Commission, observed in January that “the rise of the East and the decline of the West has become [a global] trend and changes to the international landscape are in [China’s] favour.” Such views may encourage adventurism and affect calculations in Beijing as to the likelihood of success in a war in the Taiwan Strait. A miscalculation, therefore, is probably the likeliest source of major armed conflict occurring between China, Taiwan, and the U.S. over the next decade. We cannot rule out accidents, such as a collision between a PLA aircraft and a U.S. or Taiwanese plane. This could potentially spin out of control, compelling the Chinese side to escalate lest a refusal to do so be perceived domestically (and by Xi’s opponents within the CCP) as a sign of weakness.

Hope as we might that the Chinese will continue to show military restraint, the stakes are too high for Taiwan to ignore the possibility, however slim it might appear, that China will act rashly and decide to use force to resolve the longstanding dispute. Future scenario planning in the Taiwan Strait is complicated by various elements. These include the opaque nature of decision making in Beijing, the uncertainties stemming from personalistic authoritarian rule, potential (but ill-understood due to a dearth of information) domestic pressure encouraging adventurism, as well as cognitive biases that may, under certain circumstances, encourage decision-makers to take “irrational” risks, as Dominic D. P. Johnson argues in a recent book.

For Taipei, this situation calls for a careful balancing act. On the one hand, it must avoid fuelling the propagandistic elements of Chinese military signalling not to cause panic among the Taiwanese public. On the other hand, it must also continue to improve force readiness, with U.S. military assistance, to maximise Taiwan’s deterrence and ability to respond should the PLA be called upon to attack Taiwan proper or its outlying islands. Thus far, Chinese propaganda has failed to cause panic in Taiwan, to such an extent that some allies have lamented the seeming inability of the Taiwanese to appreciate the threat they are facing. This lack of imagination, the belief that, when push comes to shove, China will not attack, appears to have had a detrimental effect on the willingness of the Taiwanese to enlist in the armed forces. Moreover, it could contribute to the perception abroad, particularly in the U.S., that the Taiwanese are not serious about their self-defence (and therefore, why should young American men and women risk their lives defending Taiwan?).

But this situation need not continue indefinitely. Opinion polls carried out by the Taiwan Foundation for Democracy in collaboration with National Chengchi University’s Election Study Centre have shown a steady rise in the share of Taiwanese who state that they would fight to defend Taiwan if China decided to use force. The 2020 survey showed that 79.8 per cent would choose to fight, up from 68.2 per cent in 2019 and 67.7 per cent in 2018. Of course, it is one thing for respondents in a survey to claim that they would defend their nation in the abstract, and quite another to do so when shots are fired in anger. Therefore, the actual figures representing the willingness of the Taiwanese to fight might be lower.

It is equally valid, however, that once China decides to actually use force against Taiwan (possibly starting with an islet in the South China Sea or an outlying island, such as Kinmen or Matsu), the Chinese threat to Taiwan’s way of life will no longer be abstract—especially for the generation of Taiwanese who are too young to have been around when the PLA bracketed Taiwan with missiles during the Taiwan Strait Missile Crisis in 1995-6. Once the threat becomes real, there is every expectation that the Taiwanese, like people elsewhere, would do what is necessary to defend their country.

One cannot know with certainty what the odds are that the Chinese leadership will unleash the furies of war against Taiwan over the next six years. However, what is certain is that Taiwan cannot afford to be caught unprepared, as any error could mean the difference between the continued existence of Taiwan as one of Asia’s most dynamic democracies and its extinction. The people of Taiwan do not have the luxury of discussing such scenarios in the abstract. For them, this is a matter of life and death.

J. Michael Cole is a Taipei-based senior fellow with the Taiwan Studies Programme at the University of Nottingham, the Global Taiwan Institute in Washington, D.C., and the Macdonald-Laurier Institute in Ottawa, Canada. He is also a Taiwan correspondent for Janes Defence Weekly. He has an M.A. in War Studies from the Royal Military College of Canada and is a former analyst with the Canadian Security Intelligence Service in Ottawa. He tweets @JMichaelCole1

This article was published as part of Taiwan’s Security & China-US Rivalry special issue. All articles in the special issue can be found here.