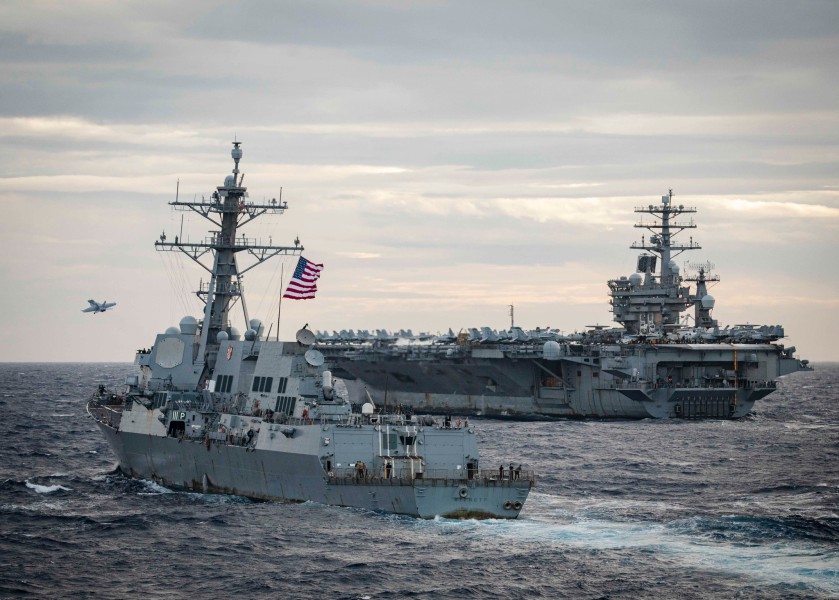 The Economist recently declared Taiwan “the most dangerous place on earth.” Indeed, it seems that although there have been the crises in the 1950s (when China’s military targeted offshore islands controlled by Taiwan), and also the missile crisis of the mid-1990s—when Beijing sought to deter Taiwanese President Lee Teng-hui and Taiwanese voters from “pro-independence” moves—Taiwan again has become a focal point of potential conflict between the United States and China. The circumstances and, therefore, the dangers, however, are different than they were a quarter-century ago or during the early days of the Cold War. Although armed hostilities remain far from imminent, risks of escalation are real—and the potential consequences serious—in an era of shifting power, changed perceptions, and fraught policy choices in Washington and Beijing.

The signs and sources of danger are clear. The Chinese military has sharply increased activities near Taiwan, sending planes into Taiwan’s ADIZ at a sometimes-near-daily pace, conducting live-fire drills and other operations in waters near Taiwan, and releasing videos of Taiwan invasion-simulating exercises. The U.S. Navy has stepped up transit passages through the Taiwan Strait, dismissing China’s objections. Beijing has severed much of its prior engagement with Taiwan since Tsai Ing-wen, and the Democratic Progressive Party won Taiwan’s presidential and legislative elections in 2016 (and again in 2020). Although China’s basic policies have not changed, the tone from Xi Jinping and Beijing’s Taiwan affairs officials has toughened. Their more pointed insistence on a “one country, two systems” arrangement for unification has become especially odious in Taiwan following recent events in Hong Kong, where the model was first implemented. Xi has linked the recovery of Taiwan to his grand goals of China’s national rejuvenation and the China Dream. Early on, the Biden administration repeatedly declared U.S. support for Taiwan to be “rock-solid”—a position resonant with much Trump-era bipartisan legislation calling for more robust diplomatic and security support for Taiwan. As the contentious March 2021 meeting in Alaska between top American and Chinese foreign policy officials underscored, Washington now places Beijing’s coercion of Taiwan high on its indictment of China’s assertive and destabilizing behaviour. Moreover, Beijing pushes back harder against what it deems impermissible American interference in China’s internal affairs, with Taiwan being the most important and enduring example. U.S. Indo-Pacific Command chief Admiral Phil Davidson warned China might try to take Taiwan in as little as six years. Discussions of cross-Strait war contingencies have expanded much farther into mainstream Chinese policy discussion.

Trends in China’s apparent assessments point to the heightened potential for a crisis over Taiwan. On the one hand, the anticipated cost of more assertive or coercive measures has fallen. The cross-Strait military balance has been shifting inexorably and qualitatively in Beijing’s favour. China now can make U.S. military intervention costly and possibly unsuccessful. In China’s policy discourse, a now-widely-held view asserts that U.S. power, particularly in the Western Pacific, is in protracted and significant decline. Furthermore, U.S. commitments to friends and allies in the region are suspect—especially following the volatile and norm-rattling policies of the Trump era. Given the now-seemingly-entrenched adversarial character of U.S.-China relations, the elevated wariness in many regional states toward a more powerful and assertive China, and the impact of China’s “wolf warrior” diplomacy, Beijing can plausibly infer that it would face relatively modest marginal reputational costs if it further increased pressure on Taiwan.

On the other hand, Beijing has growing reasons to conclude that measures short of force or crisis-courting coercion will be inadequate to achieve its long-term goal of unification or serve its self-defined need to prevent Taiwan’s drift toward independence. Beijing’s hopes that Taiwan’s voters would reject Tsai and the DPP after one term have been soundly dashed. China was already disappointed with Tsai’s predecessor, the Kuomintang’s Ma Ying-jeou, for not moving further toward unification. Any viable KMT candidate in the next electoral cycle (and likely beyond) must embrace a cross-Strait policy that will frustrate Beijing. Many younger generations of voters in Taiwan, crucial to the DPP’s recent victories, consider themselves “naturally independent.” The ongoing unravelling of Hong Kong’s autonomy, the quest for democracy, and civil liberties has deepened Taiwanese mistrust of China’s template for “peaceful reunification.”

Beijing is also getting the message that Washington’s support for Taiwan has reached levels not seen since the termination of formal diplomatic ties and a security pact in 1979. Washington-Taipei ties were robust during Ma’s tenure, but U.S. backing for Taiwan is now more pointedly expressed and strongly bipartisan (including through a torrent of largely symbolic legislation). And it has accompanied a sharp deterioration in cross-Strait relations (unlike during Chen Shui-bian’s presidency, Washington now blames Beijing). Key elements in Biden’s foreign policy redound to Taiwan’s benefit: an emphasis on democracy and human rights, and greater alignment with fellow democracies in the Quad (the U.S., Japan, Australia, and India), the Biden-administration-backed virtual Copenhagen Democracy Summit (where Tsai delivered a speech), a prospective D-10 (adding three Indo-Pacific democracies to the G-7), and more ad hoc expressions of solidarity with allies, including Japan and Korea (whose leaders’ joint-statements with Biden were relatively forthcoming with commitments to cross-Strait peace and stability). These developments do not portend an intentional U.S.-China conflict over Taiwan. Still, they suggest an elevated risk of inadvertent escalation amid worsening U.S.-China security relations, renewed U.S. focus on Asia, and an intensifying U.S.-China ideational rivalry.

The U.S.’s ability to deter moves that could bring a U.S.-China crisis over Taiwan is more uncertain than it used to be. The U.S. has long pursued “dual deterrence”—dissuading China from attacking or coercing Taiwan to effect a change in the cross-Strait status quo and stopping Taiwan from taking steps (such as clearer assertions of independence) that could risk military conflict. In dealing with Taiwan, the task has become easier. Under Ma and Tsai, Taiwan has clearly eschewed moves that could entrap the U.S. into an unwanted conflict with China. (The prospect that Taiwan might rush toward unification was a fleeting and limited concern for some in the U.S. during Ma’s presidency.) Through rising Chinese hard power, along with Trump’s erratic policies – not to mention recent iterations of periodic calls from American policy intellectuals to “abandon Taiwan” – may suggest that Taiwan’s fear of abandonment could push it toward provoking China (or perhaps capitulating). This risk has been mitigated by strong expressions of U.S. support for Taiwan, positive U.S.-Taiwan ties, and tense U.S.-China relations.

Deterring Beijing, however, has become more daunting and will require greater resources and commitment now that China has acquired new capabilities and become more assertive on Taiwan issues. The U.S.’s answer under Biden—closer security ties with regional states as “force multipliers” and a turn to “values issues” to bind such alignments together—holds promise. It also reads a bit like a page from the Cold War playbook and is often interpreted as such in Beijing. It may help achieve a Cold War-like pattern of tense stability in adversarial great power relations. But it can also further erode China’s restraint-promoting belief that, on the question of unification, time is on Beijing’s side.

Preventing a crisis has become more challenging as the Taiwan issue has become more clearly a U.S.-China conflict over vital security interests. Once (and especially during Chen’s presidency), U.S. policy circles tended to view Taiwan as the most likely source of an unnecessary conflict in a largely positive U.S.-China relationship in which the U.S. was the stronger partner. Then, the occasional calls to “abandon Taiwan” typically argued that it was a choice that could serve U.S. interests in a stable and cooperative relationship with China and China’s deeper integration in a U.S.-led international order. Today, the more prevalent U.S. view is that Taiwan is a strategic asset in a rivalrous or adversarial relationship with a near-peer China. Now, debates about “abandoning Taiwan” focus on whether the U.S. has the capacity and will to defend the status quo in the face of China’s ever-rising power and professed core interest in recouping Taiwan. At the same time, a U.S.-aligned Taiwan is becoming a more imminent and irritating problem for Beijing as China seeks to present itself as a top-tier power and to protect its increasingly far-flung interests with the ability to project force beyond the first—and second—island chains.

Avoiding unintentional conflict between the U.S. and China over Taiwan has grown more difficult as the circumstances that would create a crisis have become less clear. When the imagined dangers were that Taiwan would push the envelope on asserting formal independence or that China would launch a military attack (or imminently threaten one), the venerable U.S. policy of strategic ambiguity worked well enough. It deterred most clearly crisis-spawning moves, and it discouraged adventurism on both sides of the Strait because, if Taipei or Beijing edged close to such moves, they had to worry that they might be overly optimistic in assessing whether the U.S. would intervene in the event of an armed attack by China. Today, the crisis-triggering and conflict-risking scenarios are more complex and murkier. China focuses increasingly on what Chinese sources call “soft independence” or “cultural independence.” They worry that Taiwan is gradually slipping away without a dramatic declaratory moment—a prospect that, in China’s view, the U.S. does not take sufficiently seriously. The U.S.’s (and Taiwan’s) concerns increasingly are China’s “grey zone” military operations that can coerce, intimidate, and exhaust Taiwan, or Beijing’s “political warfare” that sows disinformation and stokes division in Taiwan’s democratic politics, or, prospectively, Chinese cyberattacks that would disrupt Taiwan’s economy and society. Ambiguity is now less a tactical choice and more a source of security risk. It becomes much harder for each side to define (even for itself) what behaviour would cross its redlines and to discern where the other’s redlines may lie. The dangers of accidental escalation to crisis and potential conflict are correspondingly greater.

Jacques deLisle is the Stephen A. Cozen Professor of Law, professor of political science, and director of the Centre for the Study of Contemporary China at the University of Pennsylvania. He is also director of the Asia Program at the Foreign Policy Research Institute.

This article was published as part of a special issue on Taiwan’s Security & China-US Rivalry.