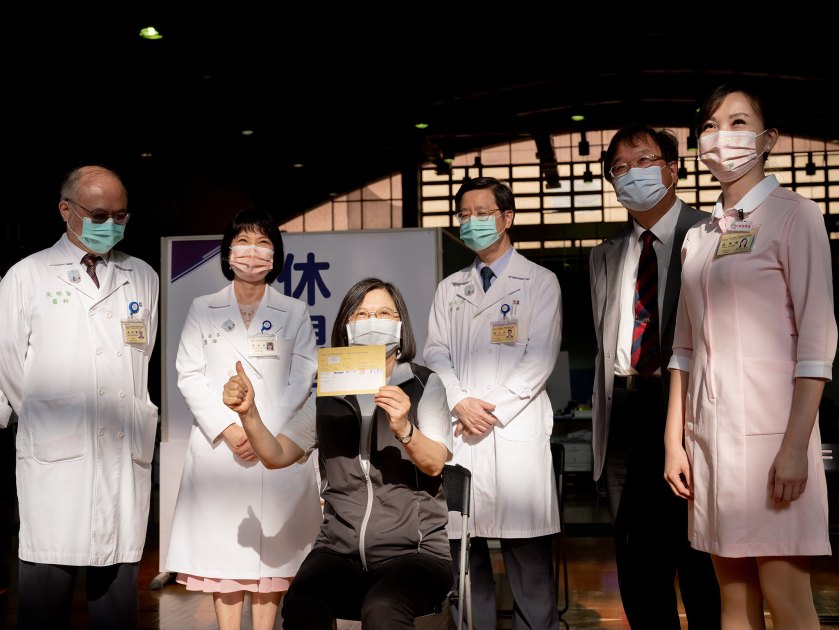 Vaccines have proved a contentious issue in Taiwan from the beginning. As the first vaccines that arrived in Taiwan were AstraZeneca vaccines, the Taiwanese public was initially unwilling to get vaccinated. The public was discouraged from being vaccinated by reports of blood clots and other adverse reactions after using AstraZeneca. As Taiwan had gone for more than a year mostly COVID-free, it is probable that members of the public did not see the need to get vaccinated.

This led the Tsai administration to open up AstraZeneca vaccination to anyone willing to shoulder the costs of vaccination so that they would be used up before expiring. Furthermore, some public figures, such as legislator Freddy Lim, also got vaccinated to try and encourage public vaccination. Lim did so by posting a picture of himself with his shirt off while being vaccinated.

Only after Taiwan experienced its first major COVID-19 outbreak in May 2021, vaccination rates picked up, as cases shot up to 180 cases overnight on May 15th. Nevertheless, at that point in time, Taiwan only had just 300,000 doses of AstraZeneca. This was just enough to cover barely over 1% of Taiwan’s population. Moreover, these doses were from a shipment of 117,000 doses in March, followed by a shipment of 199,200 doses in April.

Suddenly, the shoe was on the other foot as pan-Blue politicians attacked the Tsai administration over vaccines. The Tsai administration was blamed for delays that resulted in Taiwan not having enough vaccines during the outbreak’s start. Sometimes the issue was framed as though Taiwan had not placed any vaccine orders from the outset.

Nevertheless, as only 300,000 of these vaccines had arrived in Taiwan by the time the outbreak had started, the Tsai administration was criticised as if it had not made any purchases. Pan-blue parties such as the KMT and TPP sought to frame the Tsai administration as complacent on the issue, resulting in the present outbreak. As two of the most influential local politicians in Taiwan, Taipei mayor Ko Wen-je and New Taipei mayor Hou You-yi were particularly strident with criticisms.

More generally, Taiwan is not the only country to experience delays with vaccine shipments, whether in the region or globally. For example, the COVAX vaccine sharing agreement has only distributed a small portion of the vaccines initially promised. As later revealed through media reports on leaked documentation, the Tsai administration also sought to place orders for vaccines with manufacturers in Thailand as early as October last year. Yet, pan-Blue politicians generally sought to frame the issue as though it were a particular and unique fault of the Tsai administration that Taiwan did not see sufficient vaccines. They also accused the Tsai administration of obfuscating why Taiwan has experienced delays, claiming that this is a transparency issue.

When vaccine shipments began to arrive in Taiwan in June, primarily donated by the US and Japan, the discourse shifted. The Tsai administration was framed as having failed Taiwan in only having purchased dangerous and unsafe AstraZeneca vaccines or criticised as an international “vaccine beggar.” This was a turn of phrase that appears to have begun with KMT central standing committee member Sean Lien. Because the media seized on deaths following AstraZeneca vaccinations, the Tsai administration sought to explain that deaths that occurred after vaccination were due to correlation, occurring among elderly individuals at higher risk of dying from long-term conditions rather than being caused by the vaccine.

Further controversy ensued after high-profile KMT members including Lien Chan—Sean Lien’s father—and Ting Shou-chung were vaccinated with AstraZeneca, in violation of the vaccine priority order, despite the KMT criticising AstraZeneca. This led to criticisms of the KMT for hypocrisy, seeing as while the KMT otherwise leaned into attacking the safety of AstraZeneca, high-ranking KMT members were willing to violate the vaccine priority order to be vaccinated with AstraZeneca themselves.

Local governments held by pan-Blue mayors or county magistrates and non-government groups with pan-Blue leanings began to clamour for being allowed to purchase vaccines themselves, with the suggestion that they would have greater success than the Tsai administration in doing so. Such non-government groups include Terry Gou’s FoxConn, Gou having sought the KMT’s presidential nomination for 2020 elections, and the Sun Yat-Sen School, a deep Blue party educational institution. Gou and pan-Blue mayors and magistrates called for BioNTech imports. They claimed this to be safer than both the AstraZeneca or Johnson & Johnson vaccines.

Vaccine manufacturers only typically sell to governments, which led Johnson & Johnson to decline vaccine sales to non-government groups. However, the Tsai administration eventually announced that it would allow FoxConn and TSMC to negotiate vaccine purchases on BioNTech on its behalf. As a result, vaccine purchases were finally arranged. This was to the tune of five million vaccines apiece, and the religious group Tzu Chi was later also allowed to purchase an additional five million vaccines.

As the Tsai administration was accused of raising arbitrary legal regulations to prevent Gou or pan-Blue actors from upstaging it, the Tsai administration probably allowed for this to appear bipartisan and fair. There has been some speculation that TSMC was asked to join the vaccine purchase deal not to be perceived as solely the credit of FoxConn.

Either way, it is unlikely the deal could have proceeded without the Tsai administration signing off on the issue. The issue of local governments seeking to purchase vaccines continues to be a salient one, particularly with newer, more infectious variants of COVID-19 likely making booster shots necessary in the future. Taipei mayor Ko Wen-je, at the very least, claims that Taipei intends to purchase third dose shots on his own. This is even as the Tsai administration had already announced that it bought 20 million additional doses of Moderna for next year in preparation for future needs and is also negotiating with AstraZeneca. For his part, Terry Gou claims that he has asked to reserve 30 million doses of BioNTech for next year.

Another critical issue regarding vaccination has revolved around Taiwan’s domestically manufactured vaccines. The development process was expedited for Taiwan’s two domestically developed vaccines, Medigen and United Biomedical. The government asked both companies to prepare for production and said that it would compensate companies for costs if any vaccines were not prepared. This was similar to what was done in other countries to speed up vaccine development, such as in the US with “Operation Warp Speed.”

Medigen’s vaccine was eventually approved, while United Biomedical’s vaccine was not. This was done by skipping phase three trials to speed up the process, an approach known as immunobridging. However, this was not without controversy, with the KMT criticising the Tsai administration as playing dangerous games with the health of Taiwanese citizens, even experimenting on them as “lab rats.”

Some more conspiratorially minded members of the pan-Blue camp have alleged that the Tsai administration favours Medigen over United Biomedical because of investments that Tsai administration officials have in Medigen. Otherwise, one has seen allegations that this was why Tsai was so focused on pushing for Medigen development.

The push for Medigen’s rollout occurred earlier in the outbreak before international vaccine brands arrived in Taiwan. Yet, the rollout occurred when Taiwan had become short on these vaccines, resulting in conspiratorial accusations of a deliberately engineered shortage. As the priority for vaccination was for the elderly, the KMT also accused the DPP of only leaving dangerous, untested vaccines for young people. This was perhaps hoping to make inroads with a demographic that has drifted away from the KMT due to rising Taiwanese identity trends. As with AstraZeneca, the pan-Blue camp has also sought to suggest dangers regarding Medigen vaccination, inclusive of sudden deaths after vaccination.

That being said, as the number of individuals who have been vaccinated with Medigen has grown, pan-Blue politicians have also tried to avoid alienating those who have been vaccinated with Medigen and suffered no ill effects so far as well. As such, one expects controversy regarding vaccinations to continue in Taiwan. However, at the very least, public willingness to be vaccinated has substantially increased since the start of the outbreak.

Brian Hioe is one of the founding editors of New Bloom. He is a freelance writer on social movements and politics, and occasional translator. He tweets @brianhioe

This article was published as part of Politics of Vaccination special issue.