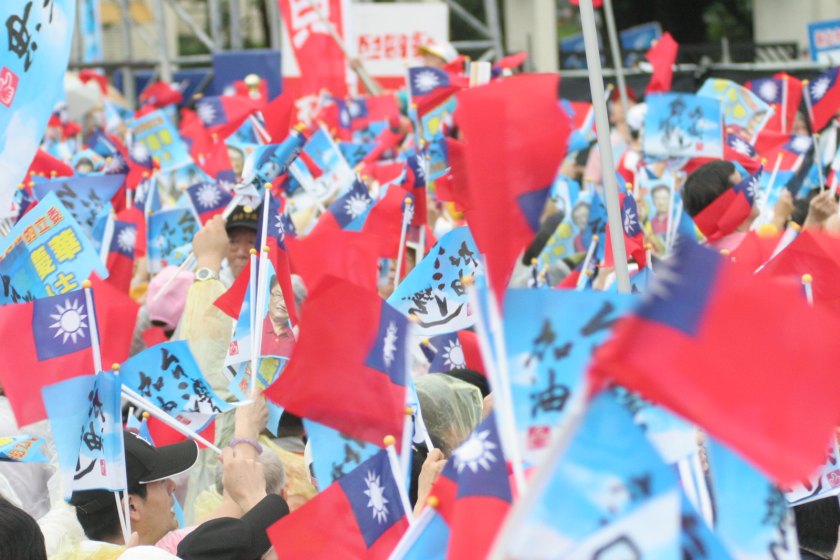 On 25 September 2021, the Kuomintang (KMT), the main opposition party, voted on the chairperson. As a result, Eric Chu (朱立倫), the former KMT chairman and ex-vice premier, was elected with 85,160, or 45.8 per cent of the votes. This election draws domestic and international media attention because the result will influence the upcoming referendums, local elections, cross-Strait relations, and even US-Taiwan relations.

Johnny Chiang (江啟臣), a legislator from Taichung City, took up the interim chairmanship by defeating Hau Lung-pin (郝龍斌) in March last year. Moreover, his predecessor – Wu Den-yih (吳敦義) – resigned following the KMT’s resounding defeat in the presidential and legislative elections in January that year. As the youngest KMT chairperson in history, Chiang put a lot of effort to overhaul the party by reaching out to youngsters. However, he avoids mentioning “1992 consensus” (九二共識) partly because young voters may not like the notion.

The KMT has defined the 1992 Consensus as “one China with different interpretations,” i.e., both sides agreed that there was one China. Still, both sides had different interpretations of that concept and respected this fact. On 2 January 2019, however, Chinese Communist Party general secretary Xi Jinping called for the adherence to the 1992 Consensus and said that the political resolution of the Taiwan issue would rest on the formula used in Hong Kong and Macau, the one country, two systems. Since then, China has repeatedly stressed that “1992 consensus” means “one China and unification,” which is rejected by the Democratic Progressive Party (DPP) government. Yet, important KMT figures like the former president, Ma Ying-jeou (馬英九), and former presidential candidate, Hung Hsiu-chu (洪秀柱), insisted that the KMT should hold up the “1992 consensus” to differentiate themselves from the DPP. Ma argued that the “1992 consensus” legitimises the Republic of China because “one China” means the Republic of China and that it is acceptable for the People’s Republic of China.

During the chairperson campaign, Eric Chu and Chang Ya-chung (張亞中), one of Hung Hsui-chu’s advisors, contended that it is important to revive the “1992 consensus.” In the first TV debate, Chang proposed to sign a memorandum with China to ensure peace across the Taiwan Strait. He also suggested reshaping the history textbook, emphasising Taiwanese and Chinese are identical. Although Chiang tried to adjust this position, he has been labelled a Taiwan-centric candidate, while Chang is a China-centric one. Eric Chu, instead, was placed somewhere in the middle between them.

Moreover, Chang looks more sincere and composed than Chu and Chiang, even though only a few people believed Chang would get elected. At the end of the campaign, the rumour of strategic voting was looming. Many KMT majors set to support Chiang endorsed Eric Chu instead. They cited that Chu is more inclusive and closer to mainstream public opinion. The election result is that Chu won the election, and Chang came in second. However, it is possible that some party members switched to Chu because he is likely to win, and he is not distant from most non-KMT supporters.

It is reported that Chu planned to visit the U.S. at the end of 2021. However, it is not clear whether Chu will land in China before or after his trip to the U.S. If it is true, he may risk provoking China for not confirming his relationship with Chinese leaders before seeing Americans. It may also raise scepticism of pro-unification KMT supporters. Therefore, it is very challenging for Chu to strike a balance between China and the U.S.

The related issue is how the KMT appeals to the young voters. It is reported that Taiwan People’s Party (台灣民眾黨) is more popular than the KMT among people between 20 and 25 years old. Given that Chu is neither a fresh face nor an eye-catching politician, he can only stretch out to young voters by policies. However, it is necessary to get around the “1992 consensus” problem, in which “one China” still needs a definition acceptable for China and Taiwan. Furthermore, Chu must promote more young members to energise the old organisation while allocating resources to either local factions or senior heavyweights.

On the bright side, Chu represents a modest position on the unification-independence issue. As a result, the KMT eventually chose Chu rather than Chang. Even though Chang can appeal to more extreme supporters, Chu is regarded as more experienced and likely to unify the party. However, pro-unification activists are resilient. They include Hung, Chang, and Han Kuo-yu (韓國瑜), who lost the 2020 presidential election but remained popular. If KMT members still directly elect the chairperson and many are strong pro-unification, radical candidates like Chang may come back.

Chu did not deliver a rebuttal to Xi’s “one China and unification” in his reply to Xi’s congratulating message, neither did he set up any timetable to meet Xi yet. Probably Chu is holding the “China card,” or maybe he is not poised for it. It is believed that Chu wants to run for the 2024 presidential election. By far, the KMT has not found a good idea to compete with Tsai Ing-wen’s (蔡英文) call for maintaining the state quo. If Chu wants to beat Tsai’s successor, he must learn from Han’s fall in 2020 when Xi’s “one country two systems” devastated Han’s bid for the presidency. In other words, the “China factor” plays a role in Chu’s victory, but it may stint Chu if he sticks with the “1992 consensus.”

To conclude, this KMT chairperson election reflects the party’s internal divide and its remoteness from the mass public. However, the KMT still controls fifteen city/county and thirty-eight seats in the legislative Yuan. Therefore, how would the KMT fine-tune its issue position and reach out to the electorate merits long-lasting attention.

This article was published as part of KMT’s Chair Election special issue. All articles in the special issue can be found here.