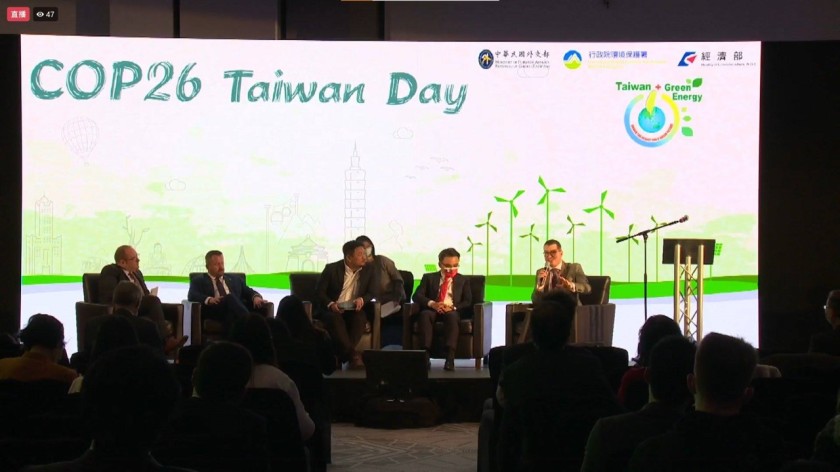 With the COP26 Conference in Glasgow fast approaching, the UK Government has made the challenge of addressing climate change a priority for post-Brexit Britain.

It is one of the platforms being used to launch ‘Global Britain’ back onto the world stage, and there is a great deal riding on COP26 delivering tangible results that can make a real difference in the years ahead.

It won’t be easy, and the UK will need staunch and reliable allies around the globe willing to embark on the journey to Net-Zero. And in Taiwan, there is no doubt that Britain has such an ally.

In April 2021, the President of Taiwan, Tsai Ing-wen (蔡英文), announced that Taiwan had begun to plot its path towards Net Zero emissions by 2050, meeting the challenge that the UK has laid down to the world.

She said that this target would be achieved through an ongoing energy transformation and systematic strategies to reduce emissions in sectors such as manufacturing, transportation, residential construction, and agriculture.

The move towards renewable energy sources will be at the heart of this ambitious plan, but this is nothing new in Taiwan. Taiwan first legislated to encourage the use of renewables back in 2009 when the Renewable Energy Development Act launched a NT$45 billion (US$1.4 billion) investment in renewable energy.

Since then, several other pieces of legislation have cemented Taiwan’s renewable ambitions culminating in the Renewable Energy Development Act Amendments 2019, which introduced a range of ambitious new targets and incentives for renewable energy producers with an overall aim of generating 27GW of clean energy by 2025.

The role of offshore wind

One area where the Taiwanese Government’s ambitions are particularly bold is in offshore wind. Here, Taiwan aims to generate 5.7GW of offshore wind capacity by 2025 before adding 1.5GW of capacity every year between 2026 and 2035.

In September, the British-Taiwanese APPG published its report, Offshore Wind, a UK-Taiwanese Success story, which examined the development of the offshore wind sector in Taiwan and the working relationships that Taiwanese and British companies have formed to help deliver on Taiwan’s ambitions.

The UK and Taiwan have a great deal in common when it comes to offshore wind development, and this is an area the APPG we chair was keen to highlight in the run-up to COP26.

As our report highlights, the UK and Taiwan are island nations with long coastlines and some helpful geographical advantages. For example, in the Taiwan Straits to the west of Taiwan, shallow seawater with an average depth of less than 60 metres makes the installation of turbines easier and more affordable than would otherwise be the case.

The Taiwan Strait is located between the Central Mountain Range and Wuyi Mountain Range, which creates a valley effect. This means consistent and reliable wind resources as well as contributing to a stable wind direction. All of this makes for ideal offshore wind turbine conditions.

There are challenges, too, of course. For example, Taiwan is prone to earthquakes and typhoons, while the Taiwan Straits presents some more specialised problems such as sand waves and soil liquefaction.

But with the right expertise, these challenges can be met. Moreover, our report shines a light on some areas where UK businesses are already playing an important role.

The UK as a model for Taiwan’s offshore wind ambitions

And we are not standing still. Through the BEIS Offshore Wind Sector Deal, the UK has committed to having 40 GW of installed offshore capacity by 2030 as well as a further 1GW of floating offshore wind.

These ambitions and the rapid strides that the UK has made are just one of the strands of the UK Government’s agenda at COP26 and something the UK is hoping that other countries can take inspiration from. Taiwan has undoubtedly done so, and the UK is keen to help.

An inevitable consequence of the Government’s ongoing commitment to the development of offshore wind has been the rapid development of a whole industry of companies will sector-leading skills and technology ready to export.

Many of these companies are already world leaders in their individual specialisms. For example, as APPG’s report highlights, more than thirty British companies are currently working on offshore wind projects in Taiwan.

Our report focused on one example: CWind Taiwan. CWind Taiwan is a joint venture between British companies CWind and the Taiwan-based International Ocean Group that has been involved in ten separate offshore wind farm developments in Taiwan since 2017, including providing cable route clearance and pre-lay grapnel run (PLGR) work on the Formosa 1, Phase 2 project.

As well as bringing in skilled professionals from the UK and Europe, CWind has also trained up a dedicated Taiwanese staff as part of its commitment to helping Taiwan develop its own offshore wind sector.

As Tom Manning, the General Manager of CWind Taiwan, told us, the company “looks forward to continuing to helping Taiwan establish itself as a key offshore wind market in the years ahead with CWind Taiwan a key supplier in a thriving domestic supply chain.”

Developing domestic supply chains, skills, and companies is going to be crucial if Taiwan is going to hit its offshore wind targets. But it clearly can’t get there alone. The APPG was pleased to find that the Taiwanese Government has gone out of its way to open the sector to overseas investment and expertise rather than following a more protectionist approach seen elsewhere.

This open-market approach that sees knowledge and experience shared across the globe while tackling the challenges of climate change is precisely what COP26 is all about.

It has proved hugely beneficial to UK-Taiwan relations too. Since 2019, UK Export Finance has provided £500 million financing for three offshore wind projects in Taiwan.

Earlier this year, the 16th UK-Taiwan Renewable Energy Roundtable Meeting in Taipei saw more than 200 industry practitioners come together to share best practices across a range of areas.

As John Dennis, the British Representative to Taiwan, noted at the time, “In the years ahead, we will strengthen our relationship with Taiwan by sharing these technologies and methods, helping ensure Taiwan remains at the apex of Asia’s offshore wind development.”

He is absolutely right. The cooperation between the UK and Taiwan on offshore wind is a model of green energy policy and a story that should be told prominently at the COP26 summit in November.

That won’t happen at COP26. But it doesn’t take anything away from the considerable progress that Taiwan has achieved on offshore wind, with support from the UK government and businesses. And it shouldn’t stop Taiwan from reaching all its offshore wind goals in the years ahead, either.

Col. Bob Stewart MP – Co-Chair, British-Taiwanese APPG – has served as the Conservative MP for Beckenham since 2010. He is a former British Army Officer and UN Commander in Bosnia and has sat on the Defence and Northern Ireland Select Committees.

Lord Rogan – Co-Chair, British-Taiwanese APPG – is a former Chair and President of the Ulster Unionist Party (UUP) and the Founder and Managing Director of Dennis Rogan & Associates. He was created a life peer in 1999 and is regarded as the leader of the UUP in the House of Lords.