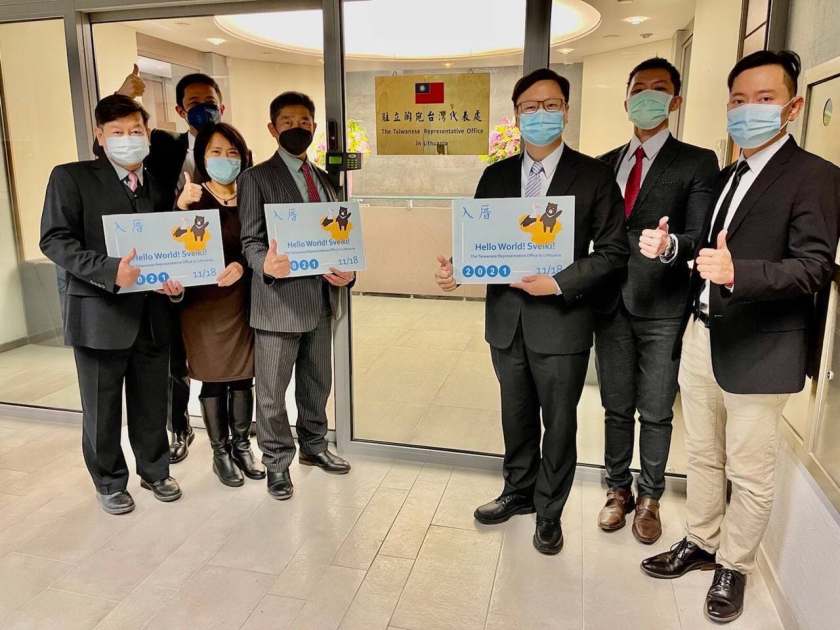 EU Parliament to Taiwan: “You are not alone.”

Taiwan has been working hard to enhance its position in Europe: focusing on its economic strength, it laid out the advantages of improving relations with Taiwan in the EU parliament and national legislatures. The Tsai Ing-wen administration had also emphasised time and again that Taiwan as a democracy was on the front line of the global fight against authoritarianism. If the West did not support Taiwan sufficiently, what happened in Xinjiang and HK could also occur in Taiwan one day.

These arguments struck a chord, particularly in the EU Parliament, which on 21 October 2021 passed by 580 to 26 votes a broad-ranging resolution in support of deepening ties with Taiwan.

This coincided with the first formal EU Parliament visit to Taiwan. This was led by Raphael Glucksmann, a French member of the European Parliament, who said in the meeting with President Tsai Ing-wen: “We came here with a very simple, clear message: ‘You are not alone.”

The term “deepening ties with Taiwan” was also adopted by the EU Commission. Moreover, the phrase turned up in the joint statement with the US on high-level consultation on the Indo-Pacific in December 2021 between Deputy Secretary of State Wendy R. Sherman and European External Action Service Secretary-General Stefano Sannino.

From Engagement to Competition

In the meantime, European relations with China had shifted significantly too. While in July 2016, the EU-China 2020 Strategic Agenda was still brimming with “strategic engagement,” three years later, in March 2019, the EU’s Strategic stocktaking had moved the needle to “strategic competition,” making Europe’s approach to be “…more realistic, assertive, and multi-faceted.”

Two years later, in 2021, the EU Indo-Pacific policy also started to take shape with the issuing of EU Council conclusions on 16 April 2021 to pursue a policy “based on the promotion of democracy, rule of law, human rights and international law.” The developments in Xinjiang, HK and the threats against Taiwan had started to hit the radar screen in Brussels.

A Major shift in Central and Eastern Europe

But the biggest game-changer did not come from Brussels or Strassbourg, but from Eastern Europe: there China in 2012 had started its 16+1 (later 17+1, when Greece joined in 2019) arrangement. It was mainly focused on using Eastern Europe as gateway to Europe for the Belt and Road Initiative. Initially, it made significant inroads, particularly in the 2015-2016 period, but China made big promises on investments that were never fulfilled, so strong disillusionment set in after a while.

Also, in several countries, one saw a domestic shift away from the conservative, right-of-centre parties towards progressive parties that emphasized a more values-based foreign policy. Thus countries like the Czech Republic, Slovakia and Lithuania started to change course and warm up to Taiwan. Taiwan responded and, in mid-2021, sent a 66-member delegation of officials and business leaders to those countries to discuss investment and industrial cooperation.

But as Janka Oertel, director of the Asia Program at the European Council on Foreign Relations, emphasized, it was not just economics: “There has been a clear realization that the situation in Taiwan is of concern to Europeans not only from a values perspective but from the perspective of regional security architecture.” Thus, around the same time as the business delegation, Taiwan’s foreign minister Joseph Wu visited Prague, Bratislava and Brussels.

But it was really one of the smallest nations in Europe, Lithuania, that stuck its neck out when it agreed to establish a new office in Vilnius under the name Taiwanese Representative Office. Beijing went ballistic and took a number of measures, including not guaranteeing the safety of Lithuanian diplomats in Beijing (at which point Vilnius had to withdraw its diplomats), blocking Lithuanian goods from being imported, and – importantly – pressuring other European companies, like the German Continental and Swedish IKEA, from including Lithuanian parts in their products.

In particular, the EU saw the latter as a major violation of international trade rules. Accordingly, on 27 January 2022, it filed a complaint with the WTO, later joined by the US, Canada, Japan, Australia, Taiwan itself, and the UK.

Still, when Lithuania published its 2021 trade numbers, it showed that exports had grown some 20% to 34.6 bln Euro, mainly due to increased exports to the US, Germany, Poland, Latvia, and the Netherlands.

Thus, the impact of a reduction in trade with China on the overall Lithuanian economy is minimal. But there are two problems. First, the pain is not evenly distributed, and some sectors, such as the laser technology industry – which exports 30 of its output to China – are more heavily impacted.

One side comment on the lasers: one needs to wonder what those lasers are used for. If they are for military purposes, then it would be good to reconsider the sales anyhow. Lithuania should analyse those lasers’ end-purpose and impose some export controls. Under the present circumstances, one needs to be thinking twice before sending lasers to China.

Both problems could be resolved by some restructuring and diversification efforts, for which the Lithuanian government has already allocated 6 million Euros. Thus, with some deft manoeuvring and adjustments, it should be possible for Lithuania to make its economy less dependent on trade with China and focus on new opportunities provided by linking up with high-tech sectors in Taiwan.

But the main “lesson-learned” will be for the EU as a whole, which will have understood that in its relations with China, it will have to be much less gullible to the promises of the Chinese market, and much more “…realistic, assertive, and multi-faceted” by pushing back against Chinese economic, political, and military coercion.And as far as Taiwan is concerned, it is now much more front and centre on the radar screens in Europe. On the one hand, as a strong partner for high-tech trade and investment, and on the other hand as a like-minded democracy that is under threat from a large authoritarian neighbour, and thus needs more diplomatic support. Moreover, the lessons learned from the Russian aggression against Ukraine will undoubtedly be a major factor in Europe’s future posture.

Gerrit van der Wees is a former Dutch diplomat. From 1980 through 2016, he served as chief-editor of “Taiwan Communiqué.” He currently teaches the history of Taiwan at George Mason University and current issues in East Asia at George Washington University’s Elliott School for International Affairs.