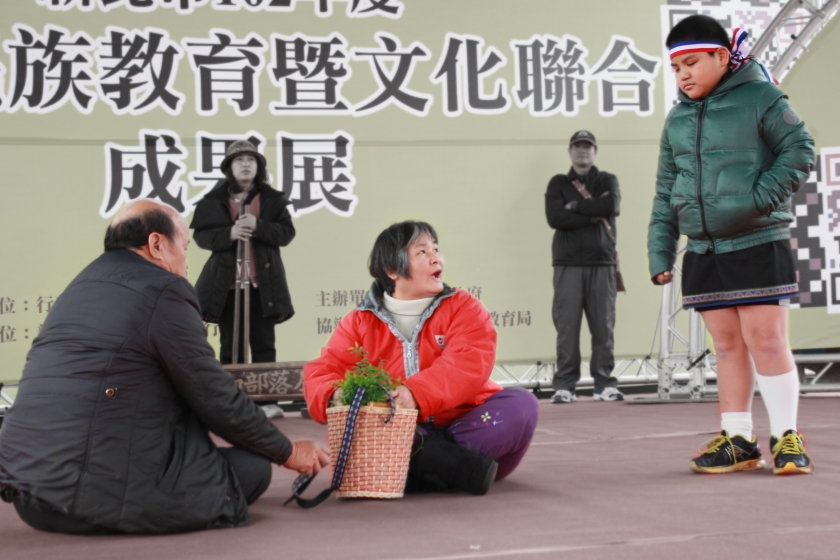 In 2021, five artists/researchers from Singapore, Malaysia, and Taiwan gathered to present their project, The Malay World Project: Roots & Routes, in an online event held by Taipei Performing Arts Center. This event was inspired by a research project asking, ‘Where do the Malays originate?’ Not only did the project study the diaspora of Malay peoples around the Asia-Pacific, but it also created a space for dialogue between Taiwan’s Indigenous people and Malay in Singapore and Malaysia on the issues of identity and belonging.

In particular, this project draws attention to different themes, such as the parallel narratives of tales from Taiwan, the Philippines, Singapore, and Malaysia. It also highlights the relationships between these peoples, their ties with lands and seas, and the ideas of merantau (travelling). Finally, this project examines the origins of the Malay people and the possibilities for establishing stronger collaborations among Malay communities from different Asia-Pacific countries.

However, due to various challenges, including but not limited to language barriers, gaps between social and cultural contexts, and the Covid-19 pandemic, collaborations between Taiwan and Southeast Asian countries could not advance much beyond economic and tourist levels. Besides the discussions among small groups from the Indigenous populations and scholars in relevant fields, there is still a lot of space for further dialogues. This article compares the advocacy experiences of Malay people in Singapore and Indigenous people in Taiwan. I argue that there is space to foster additional connections and collaborations between the civil societies among these two groups.

Either the word ‘Malay’ in Singapore or ‘Indigenous peoples’ in Taiwan has a contestable meaning, as both are umbrella terms in their respective countries. This characteristic poses challenges for advocacy due to resource competition and the difficulties of preserving identities. In Taiwan, ‘Indigenous people’ is an umbrella term covering sixteenth groups of Indigenous people recognised by the government and other unrecognised groups such as the Pingpu peoples who reside in lowland regions as opposed to highland Indigenous people. In Singapore, by contrast, ‘Malay’ could refer to the ethnic groups of people put under the Malay category of the ‘CMIO’ (Chinese-Malay-Indian-Others)’ multiracial concept.

The term ‘Malay’ could be further interpreted in two distinct ways due to the varying perspectives of its origins. First, ‘Malay’ in Malaysia, similar to Singapore, is regarded as a ‘bangsa’ (race). In this sense, a Malay ‘is a person who professes the religion of Islam, habitually speaks the Malay language and conforms to Malay custom’. Therefore, people from different ethnic groups living in the southern part of Thailand, Malaysia, Singapore, Indonesia, and Mindanao in the Philippines, who speak Malay, preform Islam, and conform to Malay customs, could be put into the race of ‘Malay’. In this regard, ‘Malay’ specifically refers to certain ethnic groups, such as orang Melayu (Malay people), Javanese, orang Kallang (Kallang people), orang Selat (Straits people) in Singapore, and people from other parts of the Malay World. In contrast, ‘Malay’ in Indonesia simply refers to a ‘suku’ (ethnic group) of people originating from Sumatera.

Currently, the official number announced by the Taiwanese government indicates that 2.48% of the total population in Taiwan are Indigenous people. However, among the other 96.42 % of the population, many Pingpu (or plain Indigenous) people have to register their identities in the administration office to get their legal status and be officially recognised as Indigenous people. However, not all Pingpu people can receive the recognition they desire. It has taken them many years to gradually acquire recognition from the government. On October 28, 2022, the Constitutional Court ruled that the Siraya people, one of the Pingu peoples the government has not recognised, should be allowed for legal recognition as an Indigenous group. Besides, the ruling by the Constitutional Court also ensured the recognition of some other Pingpu groups in the next three years.

Malay people in Southeast Asia have been marginalised since the colonial era. With the colonial power coming with capitalist systems, the Malay people and other ‘natives’ in Southeast Asia have been labelled with the myth of the ‘lazy natives.’ A similar pattern can be seen in the context of Taiwan. With different political regimes, the Indigenous people in Taiwan have been marginalised in society. Despite the fact that they have their own languages, traditional knowledge, and economic systems, they suffer from stigmatisation and violence committed by different authorities. Advocacy activities in civil societies may also be seen as a potential means for creating dialogues and resolving difficulties among the Malay and Indigenous people in Singapore and Taiwan. Take education as an example. We can observe that Malay and Indigenous people, as minority groups in Singapore and Taiwan, share similar challenges in access to education and advocating for maintaining and sustaining their own cultures and traditions.

In Singapore, the CMIO policies were designed to encompass the concept of meritocracy; the policies were also designed to bring equal opportunities for all the constituent races, particularly in access to education. Students would have access to their ‘mother tongue’ (Mandarin, Malay, and Tamil) and English in the educational systems. These four languages are the official languages that can be used in official communication with the Singapore government. However, an analysis of the national census made in the 1980s shows that the Malays were still lagging behind. The Malay Muslim professionals have been an important group who actively contribute to the advocacy of Malay as a community. For example, in 1981, Mendaki (Council for the Education of Muslim Children), the first ethnic-based self-help group in Singapore, was launched to provide educational aids to enhance the Malay students’ performances on school examinations and their learning standards. Furthermore, people from different fields, such as the media industry, academia, arts, and so forth, contribute to the promotion of Malay music, cultures, languages, and Islamic knowledge, as well as practical guides on how to engage with the elderly, and so on.

In Taiwan, the Indigenous people have been marginalised throughout contemporary history, whether in the Dutch colonial era, the Qing dynasty, the Japanese colonial era, the White Terror era, or in today’s context. Besides the lack of access to educational and economic resources, which has led to institutional barriers among generations, the Indigenous people in Taiwan also confront difficulties in maintaining their cultures and traditions. In response to such situations, civil society groups from the Indigenous communities have been putting a lot of effort into preserving their heritages, including their languages, traditional skills, lands and so forth. Furthermore, with the advocacies made for transitional justice for the Indigenous people, the Taiwanese government implemented the Indigenous Historical and Transitional Justice Commission, aiming to restore indigenous rights, heritage, and identity in recent years, and more attention has been paid to the cultures, languages, and land claims. However, critics say that the current education system in Taiwan has failed to create a learning environment that encompasses diverse ethnic backgrounds for Indigenous students. To improve such circumstances, the Indigenous civil society groups also work to empower more Indigenous people to tell their own stories, with the hope of increasing the engagement with the elderly to protect their ‘alternative’ knowledge and the advocacy for their rights on both the online and offline spheres.

Civil Society Network as a Potential for Better Shared Future

The Malay World Project: Roots & Routes represents a good example of opening up dialogue between the Malay people in Singapore and Malaysia and the Indigenous peoples from Taiwan. The historical linkage among the Austronesian people in different parts of the Malay world challenges our understanding of territories and nations, which have been shaped by turmoil from different historical contexts, modernisation, and globalisation.

Besides their shared/similar languages, tales, and relations between the peoples and the lands and seas, we can also see the similar experiences of the Malay and Indigenous people in Singapore and Taiwan as minority groups and of advocating for education and maintaining their own cultures and traditions. Therefore, future dialogues and connections among these communities could also be made through collaborations among their civil societies and advocacy activities. Although the language barriers and different social, cultural, and religious contexts still pose a lot of challenges among the Malay and Indigenous people in Singapore and Taiwan, it is undeniable that by sharing and exchanging both their similar and different experiences and thoughts, a potential network could be established for stronger advocacies not only for education but also other rights of these peoples.

Doris Yang is a researcher of Generation Now Asia, a Taiwan-based youth organisation aiming to build an interconnected civil society in Taiwan and Southeast Asia. She obtained her master’s degree from the department of Malay Studies, National University of Singapore. She engages in studies concerning gender and Islam, as well as transitional justice and female political victims from the New Order Era in Indonesia. Her current research focuses on how Taiwan can actively collaborate with civil society in the region.

This article was published as part of a special issue on Conversation between Taiwan and Southeast Asia.