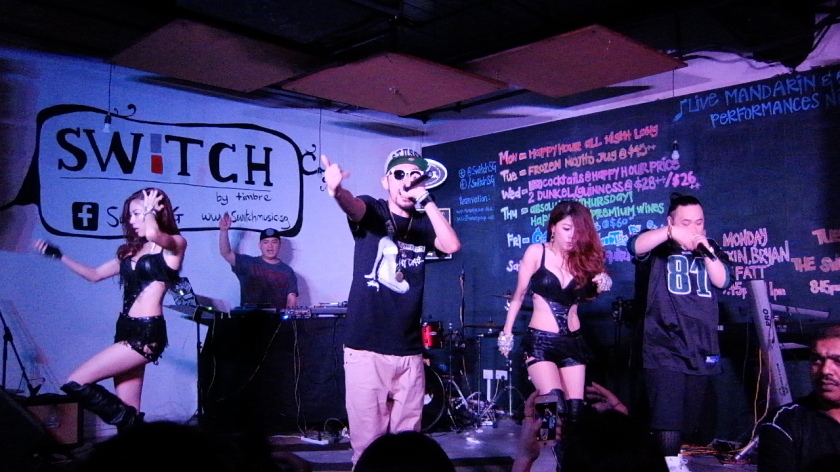 In CK High, I was known for rhyming

Now I let this old technique lead me to victory

Meticulous, having an OCD to drop da beat Reverse the flow,

I transform and refine its meaning

Incidentally shifting the significance, my flow is reversed

A single drop that breaks the wall, very unbelievable

Heavenly rhymes, turning into my Excalibur

When Machi Didi’s rap single “Machi Didi 2.0 (Mr. Big)” was released on the Internet in September 2017, online Hip-Hop music discussion forums in Taiwan went into a frenzy, not for the single itself, but for Kumachan’s 8-bar verse featured on it. Upon first glance, it seems like another typical braggadocio rap song in which the performer boasts about his skills and abilities, usually with a variety of metaphors and punchlines.

Kumachan’s verse is more than that, however. When listened to in its original Mandarin lyrics, the verse is actually a palindrome, that is, the second half of his verse is a direct mirror image of the first except for a few tonal changes. This arrangement is also a reference to Machi Didi’s self-titled song, which was released much earlier in 2003, where he rapped backwards after finishing his verse as a trick to showcase his skilful delivery. The difference is that his backward part did not make sense at all, whereas Kumachan’s does and actually rhymes, which is an extremely creative and challenging feat to achieve. Many commentators would emphasise that Kumachan graduated from the prestigious National Taiwan University (NTU) and was a member of the renowned NTU Hip Hop Club. The rapper himself even referenced his academically top-ranked senior high school “Chien-Kuo” (CK High) at the beginning of the verse. Together with other performers with similar educational backgrounds and styles of rap, he belongs to a group of rap music artists often labelled as “academic rappers” (Xueyuan Pai) in Taiwan.

Born from the ashes of the civil rights movement in the 60s and burning buildings in the Bronx in the 70s, Hip-Hop culture was orchestrated by New York inner-city youths from minority backgrounds with limited resources. They grew up in a post-industrial urban environment where the construction of public infrastructure created displacements, as social welfare was cut and public housing projects were infested with crime and gang violence. Most of these Hip-Hop kids, therefore, did not have the opportunity to receive a quality education, let alone going to college. For obvious reasons, you would seldom hear rappers from the projects of the South Bronx, Brooklyn, Queens or Harlem flexing their educational pedigrees in their lyrics.

However, in his recently published memoir, legendary Long Island rapper Rakim revealed that the class background of New York Hip-Hop artists in that era was actually quite diverse, made up of people who could be perceived as middle class, working-class and college-bound or college-educated. He almost went to Stony Brooks University with a football scholarship. You also have the Queens rapper DMC of Run-DMC boasting with the line “I’m DMC in the place to be/I go to St. Johns University” in the song “Sucker MC’s”. As Hip-Hop turned into an incredibly successful business and spread over the world through different channels, it is not uncommon for these practitioners to be mainly from wealthier and higher-educated backgrounds because of their resources and connections to consume Hip-Hop as a globalised commodity. For example, anthropologist Jesse Weaver Shipley mentioned that in Ghana, it was elite youths in coastal boarding schools with better English ability that first gained access to Hip-Hop. In South Korea, as Korean rap music scholar Myoung-Sun Song has pointed out, a cultural region called Hongdae around the prestigious Hongik University’s College of Fine Arts is considered the birthplace of Hip-Hop in the country.

The context of “academic rappers” in Taiwan is a little bit different. Beginning as a musical experiment by mostly rock or folk musicians from the late 80s to the early 90s, from the outset, rap music in Taiwan was not part of a coherent Hip-Hop culture, even though Hip-Hop images and products were already visible. In 2000, after gaining their fame by doing live performances in pubs and releasing mp3 songs on the internet, MC Hotdog and Dwagie (both were college students at the time) were signed to the label Magic Stone and would release their debut albums in 2001 and 2002 respectively. Known for their sharp and critical lyrics and much more advanced techniques using Mandarin and Taiyu, they could be viewed as the first Taiwanese “rappers”. Most importantly, they firmly located themselves within a grassroots Hip-Hop movement involving MCs, DJs, and other elements, which started much later in Taiwan and was only in its embryonic stage.

In the same year, NTU Hip-Hop Club was established, the first of its kind in the country. The founding club members were connected earlier through an online Hip-Hop discussion forum called “Master U” of which both MC Hotdog and Dwagie were regular participants. The forum generated many serious discussions on American rap music topics, ranging from the golden age Hip-Hop (roughly 1986-94) to obscure underground works. This atmosphere of knowledge sharing was extended to the club’s mission, which offered classes like “Hip-Hop History”, “Ebonics”, “Introduction to DJ” and was run akin to an academic organisation. They consciously differentiated themselves from the commercialised Hip-Hop consumers and performers, who may have the “looks” but were deemed as lacking awareness of proper cultural knowledge.

Soon, inspired by MC Hotdog and Dwagie, some of the club members began to compose rap songs and perform on campus. The forerunner was the rap group known as Tripoets, which formed in 2002. Widely considered the pioneer of “academic rappers”, the trio would often reference American golden age Hip-Hop in their lyrics, design complex flow and rhyme schemes, and profess their love for the art by using various metaphors (such as the song “Used to Love Her”). These were often achieved with the use of braggadocio contents. By doing so, even without the appearance of conventional Hip-Hop masculinity—as a matter of fact, they were at times referred to as Hip-Hop nerds—they were able to demonstrate a closer affinity with Hip-Hop than their peers in the Taiwanese Hip-Hop scene. Now, I am not saying that Kumachan has this intention while writing his verse in “Machi Didi 2.0 (Mr. Big)”, nor am I asserting that the University Hip-Hop clubs in Taiwan (now possibly over a hundred of them) that have been releasing cyphers (group rap works) after cyphers today are all identical and belong to the “academic rappers” label. What I want to illustrate here is that Taiwanese “academic rappers” are not merely “well-to-do” college students making rap music but are actually a project of alternative Hip-Hop masculinity and represent a battle for cultural authenticity. They also reflect the unique Hip-Hop historical trajectories in Taiwan.

Hao-Li Lin is an Assistant Professor at the Institute of Anthropology, National Tsing Hua University, Taiwan, with a research focus on communal, environmental management practices in Fiji. He published the first scholarly article on rap music in Taiwan in 2005 and has continued to pay close attention to this topic. He is also one-third of the Taiwanese rap group Tripoets. This article is part of the special issue on Made in Taiwan: Studies in Popular Music.