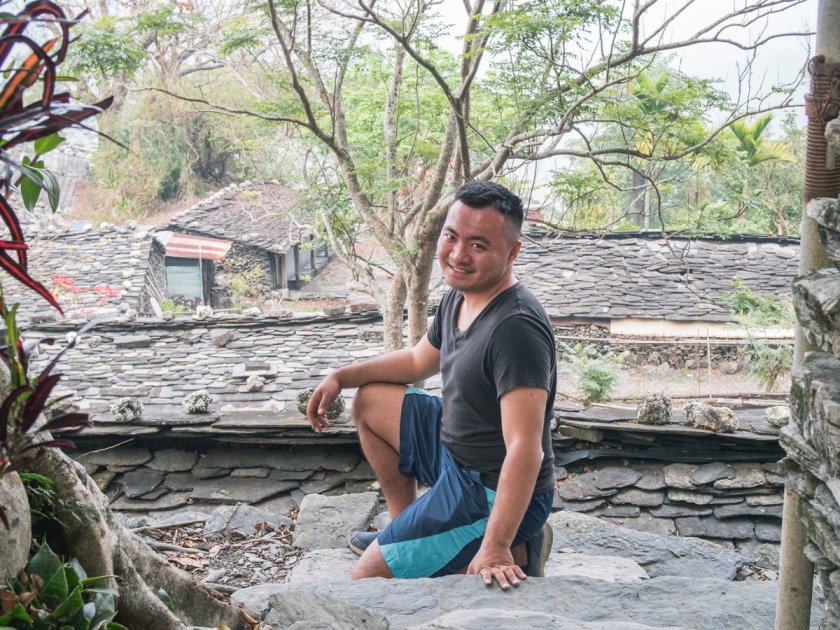 In Taiwan, the population of urban indigenous peoples is growing rapidly after the 1960s economic boom. Over one-third of the indigenous population has migrated to cities. However, I was raised by my grandparents in both New Tjuvecekadan, an indigenous community, and the older one where my ancestors originated. I furthered my education outside New Tjuvecekadan in a non-indigenous area after 12. Therefore, my story may be different from most indigenous youth in Taiwan.

As an indigenous youth, my hometown, where I spent my childhood with my grandparents, means a lot to me and is essential for my Paiwan identity. I belong to the Paiwan people from the New Tjuvecekadan Community, Chunri Township Pingtung County, a village within the Paiwan land, with around two thousand people.

I was raised by my maternal grandparents and went to kindergarten and elementary school in New Tjuvecekadan. I lived in Tjuvecekadan with them, while my parents lived and worked in New Taipei City.

I had great times learning all the subjects and did well on exams in the local elementary school; I was one of the top students. When I was twelve, I left New Tjuvecekadan and went to a boarding school in non-indigenous districts in Pingtung for high school. Since then, I only got to see my grandparents on weekends. Most of the students in my junior high school were Han-Taiwanese, and I had a hard time adapting. There were only four Paiwan students, but more than forty Han-Taiwanese students, in my homeroom class. I realized substantial differences between the Han-Taiwanese and myself regarding our facial features, skin colour, and Mandarin accents. Often, I felt targeted when talking about everything related to indigenous peoples. Sometimes my Han-Taiwanese classmates would assume that my behaviour, whether good or bad, had something to do with indigenous culture. Also, the academic competitiveness of my junior high school was much greater than that in elementary school. I was one of the best students in elementary school, but my grades in junior high school ranked poorly, so did my most indigenous peers who went to the same junior high school. I was frustrated for a long time.

After graduating from college, I entered an international master’s program in Taipei. Generally, there is no educational incentive in Taiwan and no added score for indigenous students who enter a graduate program. So, I had to compete equally with all the Han-Taiwanese applicants to get into the program. When I received the admission letter from my graduate school, I felt free of the long-established inferiority I previously felt. I believed I had finally won. For the first time in my life, I felt a strong sense of achievement.

During my schooling time away from my grandparents and hometown, I received many questions about my culture and mother tongue, and I answered them. Thankfully, because of my grandparents, I was deeply immersed in the Paiwan culture and language. So, I have an easier time later in life in dealing with my identity. Also, I learn English better than my Han-Taiwanese contemporaries since Paiwan and English share phonetical similarities.

My grandparents were native Paiwan speakers, and so were all the people around my grandparents’ age. I grew up listening to Paiwan. I naturally picked up the language. Although my grandparents conversed with their elders, contemporaries, and people of my parents’ age entirely in Paiwan, they mostly spoke to me in strongly accented Mandarin, only occasionally teaching me the Paiwan language. I’m not sure why they did that, although I assume they wanted me to integrate into mainstream society by talking to me in the mainstream language—the language of instruction in school.

My grandpa was amicable. He was the firstborn child among his five siblings. In Paiwan society, the firstborn child of a family, regardless of gender, is called Vusam, meaning millet seed. Traditionally, a Vusam is entitled to inherit their family house, property, and family name and bears a great deal of familial responsibility to be the leading financial and emotional supporter of a family.

I remembered my grandparents took me to many cultural and familial events and dressed me in traditional Paiwan attire, such as the Paiwan wedding dance that took place the night before the wedding banquet. I also recall my relatives’ funerals where I listened to traditional Paiwan women’s weeping. In addition, my grandparents received frequent visits from their relatives, and most family reunions events took place in my grandparents’ house, from which I realized the importance of a Vusam in a family.

Many elders surrounded me, and I saw them cooking game they had caught. From time to time, there were pigs’ sacrifices after the end of the wedding or funeral. Pigs are for people who helped during the events as a token of gratitude.

My grandparents were devout Christian. My grandfather would make a prayer in Paiwan with the family every time before a meal. Although I didn’t entirely understand the prayer, I felt a sense of peacefulness and empowerment. My grandparents were proactive in church and would go to people’s houses worshipping regularly. Due to their religion, they did not participate in any Paiwan rituals that involved “Palisi”-Traditional Religious Practice, which can also mean taboo depending on the context. However, they would go to the ones without Palisi.

With my grandparents, I spent a good deal of time living in Tjuvecekadan, a Paiwan slate stone house settlement. Where ancestors originated, also my grandparents’ birthplace, it’s about a one-hour car drive from New Tjuvecekadan. The old town has been proven to exist for more than 400 years. In 1961, the government forcibly moved the people out of Tjuvecekadan to a place closer to the plain area. There are still about 50 well-preserved traditional slate stone houses and without electricity. This old community is now selected as one of the potential world heritage sites. There used to have around ten regular residences during my childhood, and most people have resided in New Tjuvecekadan. My grandparents spent most of their weekdays in Tjuvecekadan and would go to New Tjuvecekadan for church on weekends.

Tjuvecekadan was like a playground for me; however, I was lonely since I was the only child. All the other children lived in the new town. So, I would make my toy aeroplane out of chopsticks and iron wire, holding it and running in my grandparents’ terraced field. I remember when I accidentally activated an animal trap with my toy aeroplane—the sounds of clutching shocked me as the mental teeth swallowed my plane. I was fine, though; I was like a horse let loose out in the grass.

My grandparent also had a small shop there, selling the locals daily essentials like candles, noodles, and canned food. I missed the time with my grandparents and the cohesive and collective energy among the people in the old town. People help each other, and they are intricately related to each other.

My grandma often told me that “whenever we have a war, we can always escape to our slate stone village.” She shared told me a lot about her experiences during World War 2 when she was young. It traumatized her greatly. Some family members were lost. One of my granduncles was sent to fight for the Japanese and never came back. Many things got destroyed. I think that also shaped my grandma’s personality that she cherished things and preserved many precious items from the family very well. When he was younger, my grandfather also told me that living in Tjuvecekadan, whenever he saw an aeroplane zipping through the sky, he and his family members would rush back home and hide the wooden millet cabin still in use.

My grandparents liked to tell me about my family’s traditional territories where my ancestor used to have cows, and most of the land is taken by the government. Also, I knew the old walking trail from New Tjuvecekadan to Tjuvecekadan.

My grandparents passed away; my grandpa died from cancer in 2005 when I was in junior high school. My grandma passed away due to acute cerebral bleeding when I was in senior high school in 2009 when the typhoon Morakot hit Taiwan. The mountain road to Tjuvecekadan was destroyed. Almost all the spots that I had fun memories with my grandparents were gone. I remember a section of the road was on a big rock and a deep cliff next to it. It was very bumpy. Whenever my grandparents and I passed the section driving a van, I felt our vehicle was almost falling apart. But the section is flat now and layered with concrete. I often played in the water under the old cement bridge (Qijia bridge), located in a narrow stream valley. Besides, a small pool was out of a waterfall on one side of the valley where my grandma caught crabs for me as my playmates. I still remembered that there were full of fireflies in a small valley close to the pool. But I’m not sure if they are still there. But now, the valley is significantly widened due to a massive landslide. The cement bridge was washed away and replaced by a new and tall suspension bridge hanging over the valley. My grandma’s passing was like the Typhoon, taking away everything both physically and mentally. My grandmother passed away too soon for me to say goodbye. So, whenever I ride along the road to old Tjuvecekadan. The reminiscences about her come to my head endlessly.

I still missed my grandparents, and I’m very thankful for the happy memories and knowledge that shape my identity. My Paiwan identity took root early in my childhood. They’ve taught me to be nice to people and cherish things you have.

Due to the indigenous population outflow to the cities, many people don’t share a similar childhood like mine. As a result, urban indigenous young people may receive more questions of their identity, knowledge of culture, and hometowns from their predominantly non-indigenous contemporaries. It’s even more challenging for indigenous young people due to their early separation from their hometowns – a source of culture. Therefore, it is crucial that urban indigenous actively connect with their grandparents and learn the language and culture back in their hometowns. At the same time, there is a need to include indigenous knowledge in mainstream education.

Ljius Rakuljivu is Paiwan from New Tjuvecekadan, a freelance interpreter (English/Chinese), and is dedicated to promoting Taiwanese indigenous arts and issues internationally. He received a master’s degree in International Master’s Program in International Communication studies from National Chengchi University. He’s currently stationed in Pingtung for his substitute military service.

This article was published as part of a special issue on Taiwan ‘Between Generations’. You can find all the articles here.