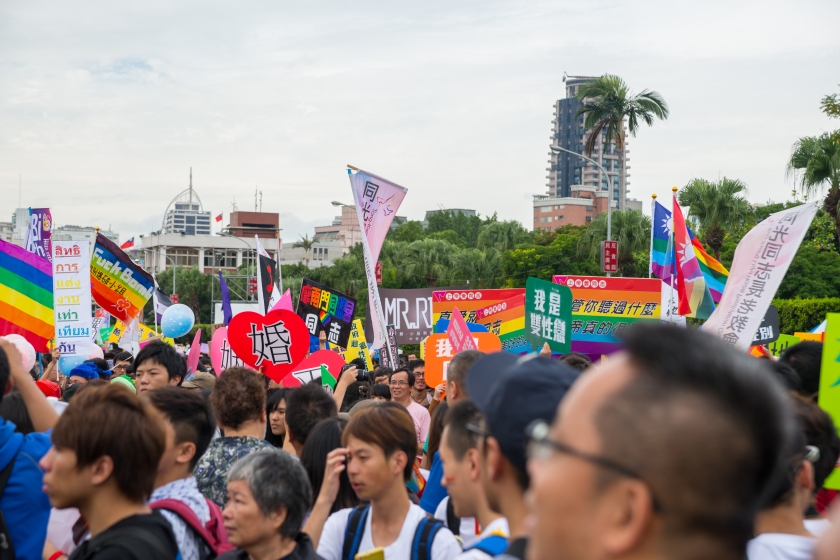 In the new millennium, queer relationships in East Asian popular cultures are often represented to consist of lovers of the same age groups rather than lovers with noticeable age gaps between them. A recent example is found in the Taiwanese film, Your Name Engraved Herein, a box office phenomenon from 2020—the film centres on two sinewy, often topless high school boys enamoured with each other. However, when one of the pair visits a park famous for cruising, he is perplexed and disgusted to find himself being approached by an obviously older gay man. In popular culture, the focus on youthful queer duos of the same generation naturally entail the marginalisation of intergenerational pairs and queer seniors.

I am interested less in criticising the ageism common in consumerist visual culture in various countries throughout time. Instead, I am interested in debunking the presumption of self-sufficiency of the featured queer youths. The queer youths imagined in the new millennium are so often taken for granted as being both financially and informationally sufficient, to the point that they do not need to reach out for aid and advice from those who are more experienced in the queer underworld.

Suppose we shift attention from the products of popular cultures from the 2020s to the non-commercial texts from earlier decades. In that case, we will locate more examples of intergenerational passions among those who do not congratulate themselves on self-sufficiency. For instance, instructive are the reclaimed memories by independent artists and NGO activists who want to change the underrepresentation of senior queer people. For example, the internationally acclaimed Small Talk, a 2016 documentary made in Taiwan, portrays a daughter’s lengthy interview regarding her divorced mother, a stone butch skilled at acquiring younger girlfriends. In addition, one of the most historic LGBTQ+ NGOs in Taiwan, the Taiwan Tongzhi Hotline Association, published two collections of oral histories of queer senior citizens who were at least fifty years old at the time of the interview:the 2010 Rainbow Bus: Youthful Reminiscences of Twelve Older Gay Men, and the 2020 Grandma’s Girlfriends.

The aforesaid examples show that those who survived the more homophobic parts of the previous century have known that they were far from being self-sufficient in those difficult times. Younger sexual minorities were forced to seek means to finance their non-normative lives and acquire the eclectic knowledge needed to navigate the world full of seductions and dangers. For them, intergenerational relationships appeared attractive, as – under such circumstances- the queer youths could hope to rely on their queer elders. The latter was expected as more resourceful, if not better-off.

Moreover, I would like to shift attention away from the present by revisiting queer literature during the Martial Law Period (1949-1987). The texts from the Martial Law Period, during which individuals of the LGBTQ+ community were treated as social pariahs, illustrate a socially contextual alternative to the new millennium (with the new millennium now being a period during which queer lives are better accepted or even celebrated by the society). Again, I will show examples from literature, as literature is among the very few historical archives of the socially marginalised lives during those decades under dictatorship.

In the literature under discussion, intergenerational relationships are portrayed more common than one might imagine. For instance, the influential novel Crystal Boys (1983) by Hsien-yung Pai portrays a gay ecosystem where virtually nobody is attracted to anybody else in their own age group. In the novel, gay boys cruising in the legendary New Park (aka 228 Memorial Park in today’s Taipei), who need to support themselves through commercial sex from time to time, need partners who offer them shelter. So, naturally, they are only interested in the noticeably more mature men, who can provide for them, rather than other beautiful boys of their age. Interestingly, the commercially successful 2003 TV miniseries based upon the novel downplays the convention of intergenerational intimacies. In the original, the protagonist is expelled from high school because of his sex with a senior school janitor; in the TV series, the character is, by contrast, punished because of his affair with a photogenic boy of his age.

Despite its fame, Crystal Boys is not the first novel representing homosexuality in Taiwan. It is at least preceded by Liang-hui Kuo’s 1978 novel on lesbians, Besides the Two Kinds. Unlike many popular lesbian narratives across East Asia on girl students, this novel instead portrays a vibrant secretive community of mature lesbians in Taipei. The protagonist, a submissive butch in her late 30s, is in love with a femme, a college student’s mother. Always eager to make more money to please her femme lover, the butch accepts a lucrative offer to have sex, intergenerationally and heterosexually, with an old gay man, who finds the butch to be boyish enough to pass as a young lad. Since the femme is probably older than the butch by only ten years, the butch-femme relationship might not look like an example of intergenerational passions. Is a ten-year gap long enough to be considered a generation gap? After all, the questions “when is a woman considered old,” and “how many years make up a generation among LGBT+ people” are never objective but rather are always subjective. It has been banally common that people at the age of twenty would announce they are already too old. Similarly, we often hear that a gay man at the age of thirty complains about his generational gap from his lover at twenty-five.

Pai published Crystal Boys when he was 46. Before the novel, he published short stories in the 1960s, some of which are collected in the legendary short-story collection Taipei People. Interestingly, in his 40s, Pai designates younger characters as the subjects of desire, whereas he in his 20s designated older characters as the libidinal subjects. Crystal Boys portrays that the younger gay men, immobilised by impoverishments, are generally more desperate than their elder counterparts to secure intergenerational pairings. By contrast, in Pai’s earlier short stories, the senior characters eagerly desire the youthful ones. In “Moon Dream,” a senior doctor rescues a dying handsome lad, for the young man reminds the doctor of his beloved friend who had died some decades ago. In “Youth,” an ageing painter admiringly gazes at the easily aroused sixteen-year-old boy model, who poses naked for the painter for nude paintings. The story “A Sky Full of Bright, Twinkling Stars,” presumed a prequel to Crystal Boys, aptly refers to the senior characters’ obsession with the young as “the cult of youth.” In New Park, senior gay men pursue the youthful male prostitutes despite the risks of being caught by the police on the charge of gross indecency. In “Love’s Lone Flower,” Pai turns attention to lesbians. A seasoned woman in charge of a hostess bar dreams of bringing a vulnerable bargirl under her wing from sexually abusive men. More romantically motivated than sexually driven, the senior heroine always hopes to build an unconventional family, a shelter parallel to the mainstream society full of toxic men, consisting of only herself and a younger woman she can take care of. If Pai’s novel stresses older gay men’s ability to provide for the younger, his earlier stories emphasise the older people’s daring infatuation with the younger. Both types of scenarios testify to the essential roles of the senior queers in Taiwanese literature.

I will conclude with a 1973 play on the coolies for hire located in Dadaocheng, a historic district in Taipei. Written by the novelist Chen-ho Wang, I Hope You Will Return Soon was once prohibited during the Martial Law Period for its pessimistic portrayals of Taiwan before its economic miracle. The play visualises an unconventional family accommodating a person with a disability: an older man, a garbage recycler, adopts, despite his own pennilessness, a homeless boy disabled by muteness. When the mute boy accidentally goes missing, the adoptive parent worries that the boy might be seduced by a nearby effeminate gay streetwalker and his companion who openly peddles pornographic photography. It is unclear whether there is any intergenerational passion between the adoptive father and son. Still, the father determines to insulate his small household from the homoerotic distractions common among the hard labourers back then.

It is rewarding to revisit history. I am motivated to reread the martial-law-period queer literature often, for it reminds me that the members of sexual minorities back then were imagined leveraging their survival despite their minimalised resources. Maybe it is precisely because of their precarious lives that they had to empower themselves with intergenerational articulations, in which queer seniors were indispensable.

Ta-wei Chi teaches disability studies and LGBT studies at National Chengchi University, Taiwan, where he is an associate professor in the graduate program of Taiwan Literature. His queer science fiction novel, _The Membranes_ (Trans. Ari Heinrich) is published in 2021 and can be purchased here. He tweets @Tawei_Chi

This article was published as part of a special issue on Taiwan ‘Between Generations’.