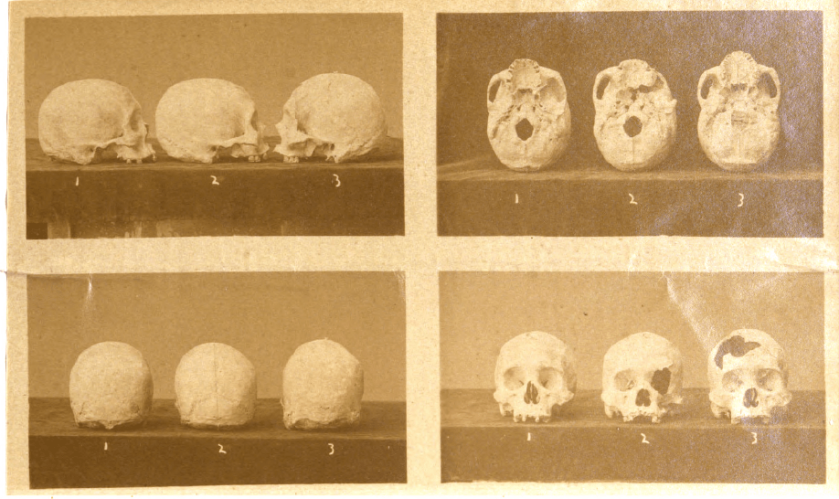 The second piece of the puzzle: Professor Turner of the University of Edinburgh

Thirty years later, the British anatomist, William Turner, published another thesis about these decapitated Mudans. This was work that helped fill in another piece of the puzzle. Turner was a well-known medical scientist, and he influenced the modern medical understanding of the nervous system. From 1867, he was appointed as an anatomist at the University of Edinburgh. At the time of writing, he was had recently become principal of the University of Edinburgh and had just left his position as President of the General Medical Council. In his 1907 essay, he wrote:

About twenty years ago, my friend the late Dr John Anderson F.R.S. presented to me four skulls from the Island of Formosa. They had been collected on a field of skirmish between the Botans and Japanese, by an American naval officer attached to the Japanese military expedition to that island in 1874-5. The heads had been decapitated by the Japanese soldiers, and the skulls were prepared for the American officer, in whose custody they remained until he presented them to Dr Stuart Eldridge, by whom they were given to Dr Anderson. In 1877 Dr Eldridge read “Notes on the Crania of the Botans of Formosa” to the Asiatic Society of Japan, which were printed in pamphlet form, a copy of which I received along with the skulls from Dr Anderson. In this pamphlet Dr Eldridge states that the Botans or Motans are one of the aboriginal tribes of southern Formosa. He describes them as a race of rather fine physical development, of medium height, courageous, frank and impressible like most savages, straight-haired, complexion various, but always of a brown tint, never black. They cultivated the soil, possessed domesticated animals, were fond of the chase, lived under a patriarchal system, and had a rude form of religion, the cult of which was in the hands of priestesses. He noted some of the more prominent characters of the skulls, and gave a number of measurements in inches. Photographs on a small scale of three of the specimens were reproduced in his paper. ……As specimens of the skulls of the aborigines of Formosa are seldom met with in Museums, and as Dr Eldridge’s Notes seem to have received no attention from anthropologists, I have thought that a more complete description of these skulls, in accordance with modern methods, might prove of interest.

From the information provided by Turner, we can learn that he acquired the remains from Dr Anderson and that Anderson obtained them from Eldridge. But how did Eldridge get them in the first place? According to our research, only two Americans accompanied the Japanese army to Taiwan after the Mudan incident. These are Douglas Cassel（1846-1875) and James R. Wasson（1847-1923). Cassel was initially stationed in Yokohama City by the US Navy. In the spring of 1874, he was appointed as a military consultant by the Japanese army. He oversaw finding a place for the Japanese military to land during the Mudan incident and locating areas along Taiwan’s Eastern Coast that would be amenable to Japanese colonisation.

In July of that year, the Kameyama military base saw a severe malaria outbreak, and Cassel was amongst the infected. In October, he left Taiwan to seek medical treatment and passed away in Philadelphia shortly afterwards. Like Eldridge, Wasson was part of the 1871 American consultancy group to Japan (then-president Ulysses S. Grant even personally wrote him a letter of recommendation). He served as an engineering consultant in the Hokkaido Development Commission. In 1874, following the Mudan incident, Wasson accompanied the Japanese expeditionary force to Taiwan’s Hengchun peninsula to help with construction. In July of that year, as malaria spread across the Japanese basis, Wasson was also infected and was sent to Japan for medical treatment in August. Despite recovering from the illness, he never returned to Taiwan. Up to now, we still don’t have the answer as to how Eldridge got these remains in the first place. However, the current description shows that Japanese military generals took the remains of these decapitations following the Shimen battle. They were given to either Cassel or Wassen, both American military consultants in Japan, who then, in turn, gave them to Eldridge, who used them in his research.

The third piece of the puzzle: Dr Anderson, director of the Indian Museum

Only one piece of the puzzle is left now. That is the bridge between Eldridge and Turner: Dr Anderson. At first, John Anderson (1833-1900) was a zoologist and anatomist. In 1864, he travelled to British Calcutta to help the colonial government establish the Indian Museum and subsequently serve as its director whilst teaching comparative anatomy at Calcutta university of medicine before returning to the UK in 1887. During his time in India, Anderson travelled to East Asia many times to conduct fieldwork and collect samples, for example, travelling to Hokkaido to collect the art of the Ainu people in 1884. In Turner’s memory, Anderson had taken the heads from Eldridge “about 20 years ago” (which would make a date around 1880), which fits in with Anderson’s trip to Japan. The remains then followed Anderson back to Edinburgh following his return to the UK, where they were handed over to his old colleague, anatomist Thomas Anderson. After putting together this puzzle piece, we immediately emailed The Anatomical Museum of the University of Edinburgh.

We received a reply confirming that the Mudan remains were indeed still stored in their collection. So, at this point, the puzzle was finally complete. This is the full story of the journey taken by these unfortunate victims. They came from a battle in Pingtung, to an anatomy lab in Yokohama, to the University of Edinburgh, where they were left in storage.

Travelling across half the world for over 100 years, the remains of these indigenous people are finally on their long way home. The discovery of these decapitated people received the Pingtung government’s attention and the Council of Indigenous Peoples. According to reports, the Taipei Representative Office in the United Kingdom has already contacted the University of Edinburgh to discuss the possibility of repatriation. Many hope that this can be the first collaborative effort to return the remains of Taiwanese peoples that had been taken abroad. Thus, the plans for repatriation are becoming an important topic in history circles in Taiwan.

The stories of these remains might sound like a chance encounter, but they reflect the broader trends of the production of transnational colonial knowledge. The heads were first collected by the frontline workers of Cassel and Wasson and then given to Eldrige, who was at the front end of this knowledge production circuit. They were then taken by the colonial official and museum director Anderson back to the colonial metropole and then granted to the University of Edinburgh. Finally, they were measured and used to produce all kinds of “scientific knowledge” by Turner. These soldiers of Mudan were first taken as prizes of war by the Japanese army and eventually became measurement data used by scientists in the colonial order before being left uncared for in a dark storage unit. It is said that we die twice, the second time when we are no longer remembered. If this is the case, the lives and stories of these people are still being told, and we can still hope to ensure they have a better future moving forward.

Ko-Yu Chiang is the assistant editor at Watch Taiwan Magazine (觀•臺灣). He is also a master’s student in the Department of Sociology, National Taiwan University, where he studies the history of colonial science and food safety governance in Taiwan.