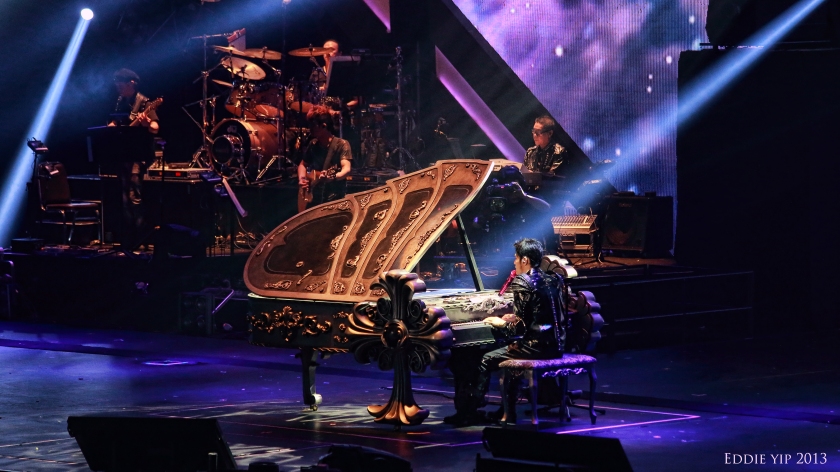 In July 2022, the Mandopop King Jay Chou (周杰倫) released his latest album, the Greatest Work of Art (最偉大的作品). This album still achieved extraordinary chart success with various singles already charted in the past years. It even turned out to be the top five albums debuts on Spotify Global. While Jay Chou has shown efforts to experiment with new things—ranging from virtual concerts and vinyl releases to live streaming on the Chinese video-sharing platform Kuaishou (快手)—his status, artistry and fame are seen as the outcome of his continual globalising project starting to take shape early in his career. In this article, I will highlight some of his milestones and career moves, which led us all to today.

Jay Chou’s success and career trajectory do not only reflect the significant changes brought by digitalisation to the recording music industry and how Taiwan’s recording music industry has responded to them, but also how his music became the soundtrack of the reshaping identities of his audiences across the Sinophone world, sometimes as a site of struggle. Born and raised in Taiwan, Chou’s career has been associated with independent labels (meaning locally established labels which do not have financial backups from the big five)— from Alfa Music (阿爾發音樂) to JVR Music (杰威爾音樂), which he co-founded.

He was famous not only for his China Wind music (中國風音樂), as his musical influences ranged from Classical music, Rock, and R&B, all the way to world popular music, but China Wind music was still significant in his career, and it resonated with many. In this new album, the song “Cold Hearted” (紅顏如霜) was again composed by Jay Chou and the lyrics were written by Fang Wen-shan (方文山) — the China Wind Duo, whose collaboration can be traced back to the debut album of Jay Chou, released in 2000. When the market of music streaming services grew exponentially worldwide after 2015, there was a saying “得周杰倫者得天下”(Whoever has Jay Chou’s distribution deal, has it all.) in the PRC. In the same year, Season four of The Voice of China (中國好聲音) was aired on Zhejiang TV (浙江衛視) and gained immense popularity. During this season, Jay Chou, the “Father of China Wind” (中國風之父), joined the show as a coach and encouraged many of his fans to watch the contest. He told a finalist on his team, the Australian Chinese Li An: “Chinese music is the coolest. You should sing more China Wind (中國風).”

Chou’s China Wind songs often focus on an imagined past that is ancient and sophisticated, and a nostalgic Chineseness is often romanticised. In a way, it is intentionally ambiguous and vague; it cleverly avoids potential dissimilarities in the perception of Chineseness in different markets. In a way, it was also the central position of Taiwan’s music industry back then, which made China Wind music’s popularity possible. During the years when Taiwan’s pop music significantly influenced the PRC markets, Jay Chou also composed various China Wind songs for many pop artists. This included S.H.E., Coco Lee, and Jolin Tsai. This occurred through a common practice of singer-songwriters writing songs for other singers in Taiwan’s Mandopop industry.

While some observers might consider this as a move catering to the PRC markets and a staged performance of ethnicity with a specifically manufactured diasporic mentality of “returning to the motherland”, Jay Chou’s music reflects this negotiation between the global and the local as well as underlining a rising Chinese nationalism. Besides representing Chinese culture in music, he is actively pursuing worldwide relevance and representing singers belonging to or originating in the Chinese-speaking world, who also have a global presence. However, the consumers of this globalising image may not necessarily be a Western audience but rather the younger Chinese generation who seek “a sense of glamour, fantasy, and modernity” in popular culture. At the same time, the cultural products have also been consumed by Chinese-speaking populations who are transnational subjects residing overseas and for whom music provides a point of reference to one’s roots and cultures.

This strategy to project Chineseness as a globalising project was best exemplified by Jay Chou’s appearance on the Nasdaq screen at Time Square in January 2019. He was voted the most influential Chinese singer on Kugou (酷狗), the Chinese streaming service owned by Tencent ( 騰訊). However, other than his name, the text shown on the Nasdaq screen alongside a photo of Chou is all in Chinese. Such a projection of a globalising Chineseness caters to the hopes of the well-educated and well-travelled Chinese newly rising classes. They not only aspire to participate in global culture or be “compatible with the global world” but also embrace the nation-branding of the PRC as a rising and thriving globalised state.

While the title of Jay Chou’s new album, The Greatest Work of Art, could be seen as a sign of confidence, it could also be perceived as how his music has featured various global influences, which enabled his personal and musical journeys to be transnational and across generations. Starting as a classically trained musician from Taiwan, his China Wind music conquered the PRC and the Sinophone markets. After this, he went to the Nasdaq screen in New York. He’s undoubtedly the King of Mandopop, and perhaps the last Megastar from Taiwan (at least for a while), who thrived at the juncture of the analog and digital era. However, I argue that the infrastructure, people, skills, and networks of Taiwan’s recording music industry at the time, provided the possibilities for his globalising attempts.

In this very moment of writing, I cannot refrain from listening to Jay Chou’s debut album again while reflecting on his journey. One must consider music as a form of arts and social practices generated in specific music scenes and produced by communities. In Taiwan’s music industry back in 2000, there were talents that Jay Chou worked with—ranging from producers to arrangers that he worked with (e.g., Baby Chung鍾興民 and Eric Hung 洪敬堯, to name a few)— to make the first album possible. There were also conventions practised by musicians and industry workers, which eventually shaped the networks, aesthetics, and music we hear. Jay Chou is situated in fractured markets where the audiences are diverse yet experiencing various versions of nationalism and geopolitical crisis. His initial success was followed by consultations due to geopolitical issues, commercial concerns, quick responses to market changes, and strategies to ensure his place in Mandopop history. We may argue that in the world of pop music, Jay Chou has indeed created the Greatest Work of Art— to craft this piece of work, it takes talents and endeavours to negotiate where he was rooted and how he wanted to journey. The journey is still going on.

This article was partly adapted from “Relocating the Functions of Chineseness in Chinese Popular Music after the China Wind”, China Perspectives.

Dr Chen-Yu Lin is a Lecturer and Researcher at Cardiff University. Her research interests are Mandopop politics, Taiwanese music, music censorship, and the relationship between music and identities. She is also a convener and teacher on the MA Cultural and Creative Industries module at the School of Journalism, Media, and Culture. She is also a documentary filmmaker producing films about music.

This article was published as part of a special issue on Youth Culture.