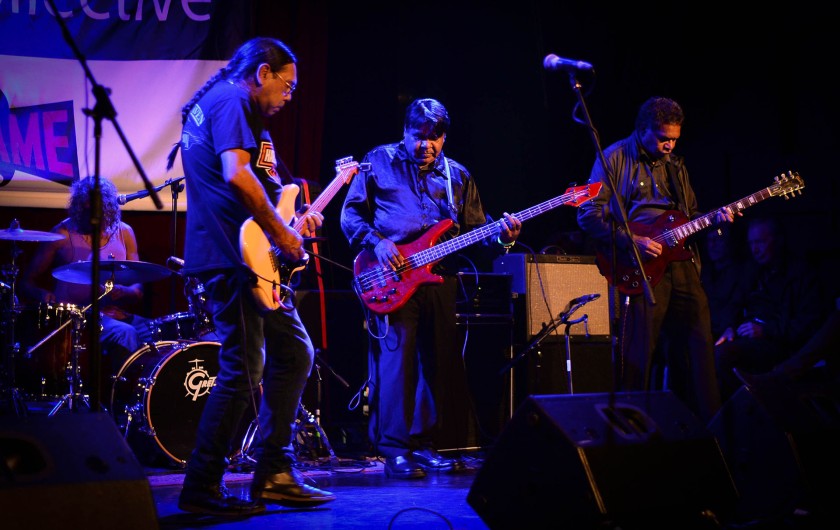 For many Indigenous peoples in Taiwan, music is a lively cultural medium that facilitates allying with other Austronesian peoples residing in Oceania. Such a musical way of fostering cultural diplomacy has currently been popular in Taiwan, especially after the release of the album Polynesia in 2014, emphasising the shared cultural genealogy of Austronesian under the collaboration of an Amis singer Chalaw Pasiwali and a Madagascar musician Kelima.

In the same year, another project called the Small Island Big Song aimed to establish a network between Pacific Islands and Taiwan through music and film. Musicians in this project released their 2018 album Small Island Big Song and a sequential album named Our Island in 2021. Moreover, all these musical works focus on fusions of traditional folk music(s). Positive public perception reflects Taiwanese people’s rising demand for establishing a cross-Pacific Austronesian community between Taiwan and the Pacific Islands.

As an ethnomusicologist who studies popular music of diasporic Pacific Islanders, I see a discrepancy between the musical scenes of the two groups of Indigenous peoples. Taiwanese Indigenous musicians highlight the tradition and transformation of Austronesian folk music to express Indigeneity. In contrast, Pacific Islanders employ mainstream popular music such as reggae in their political discussions on pan-Austronesian identity. In this article, by introducing the shared experiences of Pacific Islanders, I propose that popular music could be a powerful medium in addressing the concurrent struggles, transforming this genealogical community into a political alliance that empowers both sides of Indigenous people.

Reggae as a Catalyst of Alliances

Due to such colonial history, reggae music has been one of the dominant popular music genres in the Pacific after the internationally commercial success of Jamaican roots reggae music in the 1970s and Bob Marley’s tour in Australia, Aotearoa, New Zealand, and Hawaii in 1979. Pacific Islanders view Jamaican roots as reggae musicians addressing Afro-Jamaicans’ socio-political oppression and cultural-physical dislocation through performances that stand for solidarity.

To many Pacific Islanders, reggae music is not only a means of telling how they are dehumanised by the Western colonisers but also a strategy of constructing a transnational and transcultural identity that allying with Black people and other groups of people being politically oppressed around the world. For example, in the early 1980s, the pioneered Australian reggae band No Fixed Address put their refusal of the imposed White history and ideology in the song “We Have Survived,” and they also allied with Black people with another song entitled “Black Man’s Rights.”

In the twenty-first century, Pacific Islanders continuously sing reggae; furthermore, it has become a communal form of addressing and soothing everyday social and economic struggles. For instance, an Aotearoa New Zealand Māori reggae band called Katchfire discusses the poverty of people in their Māori community by singing “Whoa no baby stop it. Just another overdue bill. That I’ve got nothing to pay on. Disregard it” in their song “Lose Your Power” (2003). For instance, a Native Hawaiian reggae musician Kāwika Aspili features a renowned Hawaiian reggae leading figure named Kaʻikena Scanlan in the song “I Am Not American” (2019). They accuse the injustice invasion of American colonisers and state the sovereignty of Native Hawaiian in Hawaii. These reggae musicians are dedicated to creating a secure, sound space that allows transnational and transcultural conversations on the shared experiences of being politically oppressed. For them, reggae is capable of addressing daily based social issues promptly.

For the Pacific Island reggae music scene, inter-islandic collaborations are common. Polynesian musicians have numerous connections in Hawaii, Tongan, Samoan, Aotearoa, New Zealand, Tahiti, and Fiji. In addition, their community is influential across many islands in Oceania and possesses strong and cohesive connections that bring them together. The leading figure of Pacific Island reggae, Fiji (George Veikoso), advocates for Indigenous rights beyond island boundaries in the Pacific. Born and raised in Fiji, he sings Indigenous Pacific Island languages. Although he moved to Hawaii when he was fourteen, his immigrant experience motivated him to collaborate with musicians from many places. After his fame spread beyond Hawaii, such an inter-islandic collaboration became his well-known strategy for evoking public attention to Indigenous social issues.

In an interview, he mentioned his motivation: “I’m trying to reach our people, island people and people who love the islands. Not necessarily Polynesians, but people who know how beautiful it is to live here.” His attempt to unite islanders is expressed through the Māori chants in his song “Chants of Island.” He also mentors Pacific Islanders musicians such as Samoan singer J-Boog, who moved from California to Hawaii to work with Fiji and then gained huge commercial success in the Pacific Island reggae scene. Fiji’s strategy is effective. From Fiji’s concert with the Hawaiian reggae singer Maoli in June 2022 in Honolulu, thousands of the audience were shouting every word of the Māori chant in “Chants of Island “, regardless of where they were from.

The inter-island music collaboration is also foundational in forming the diasporic Pacific Islanders communities in the United States. In every Pacific Island reggae performance, you can see people wearing hoodies and shirts which read, “We are Polynesian,” or “Hawai‘i,” and call and responding each other with Cheehoo, a positive cheer-screaming originated from Samoan culture. Reggae music also connects with diasporic Pacific Islanders’ social movements and community services. For example, OMAI FA’ATASI, a 1970s Samoan youth group, offered education and community service to uplift Samoan Americans in Carson, CA, out of the struggles of poverty, discrimination, and colonisation. Joe Savage, a Samoan entrepreneur running a media and reggae concert company known as Island Block Networks, is one of the Samoans who continues to do this work by supporting his people and extending it to the broader Pacific Islander community and their reggae.

This diasporic community also participates in the society of Oceania. For example, on February 18th, 2022, thousands of Pacific Islanders gathered in House of Blues, a live venue in Anaheim, California, to attend the ONE LOVE TONGA Benefit Concert raising funds for the Kingdom of Tonga to recover from the volcanic eruption. More than ten groups of Samoan, Hawaiian, and Tongan reggae artists performed for Tonga. Joe Savage organised the concert and fundraiser. The concert raised a great amount of funds and demonstrated solidarity with Pacific Islanders, regardless of where their roots were—all stood with Tonga. From these cases, we can see that reggae creates a safe space for diasporic Pacific Islanders to express their identity and nostalgia while resisting the racial discrimination, cultural marginalisation, and poverty they have faced in the mainland US as they participate in the societies of their homelands.

A Growing Potentiality of the Trans-Pacific Connection

The cases of Pacific Island reggae show that inter-island music collaborations have united Pacific Islanders as a community to resist colonialism and recontextualise their Indigeneity in a mobile and contemporary world. From the recent music collaborations between Taiwanese Indigenous musicians and other Austronesian musicians, I see an emerging transition from a focus on the ancestry connection to a partnership in redefining Indigeneity via more experiments in contemporary music. Taking the Small Island Big Song as an example, in their earlier projects, including the 2018 album Small Island Big Sing, they traced the cultural similarities from traditional music to emphasise the relationships among Australasian cultures and claim Taiwanese Indigenous cultures as the origin. In their sequential album Our Island, while focusing on the cultural connection between Pacific Islander and Taiwanese Indigenous people, the increasing electronic sound and popular music impacts reveals their ambition to unsettle the articulation between tradition and Indigeneity.

For instance, the Amis singer and TV program host Ado’ Kaliting Pacidal invited Amis popular music singers Suming Rupi and A-Lin to compose with three Aotearoa New Zealand Māori musicians in the music reality show Your Island My Home. They not only traced the similarities in traditional cultures but also built a contemporary connection by sharing their everyday lives. This transition shows a growing potentiality of this trans-Pacific musical connection in crossing from the world music market to a popular music field, from genealogical linkage to a cultural-political alliance.

The bridge between Taiwanese Indigenous musicians and Pacific Island reggae has already been built. Suming Rupi’s 2019 album, Bondada was inspired by Pacific Island reggae. In 2015, the Atayal film director Laha Mebow invited Suming to work with New Caledonia musicians with their Kaneka music. This local popular genre combines reggae music with the traditional Kaneka rhythm. The next year, Suming went to Guam to attend the Festival of Pacific Arts, and I went with him as the staff in his studio. At the festival, he saw Chamorro people and other attendees always playing reggae music in the festival venue. He quickly related this reggae craze with his New Caledonia experience. Seeing how reggae connects those Pacific Islander attendees and performers in the festival, Suming shared that he really wanted to have a piece of contemporary music that could bond Taiwanese Indigenous people together as reggae did to Pacific Islanders. Within this inspiration, Suming started his journey of reviving the rhythm he called bon-da-da, which was used in Taiwanese popular songs, with the Amis music tradition and electronic dance music to create a Taiwanese Indigenous version of Kaneka.

From the cases of Pacific Island reggae, we can see how globalised popular music bonds Pacific Islanders together in facing daily challenges from colonial powers. Looking back to Taiwan, the increasing music collaboration with Pacific Islanders also reflects the position of Taiwanese Indigenous people, whose connections with other Austronesians was cut off for years and who are still looking for contemporary approaches to self-determination. Envisioning the musical interactions between Taiwan and the Pacific, the cross-island reggae collaboration in the Pacific demonstrates a potential future of transforming the genealogical connection into a cultural-political alliance to fight against the ongoing colonial oppression together.

Chun Chia Tai is a PhD candidate in Ethnomusicology at the University of California, Riverside. In her dissertation project, she works on Pacific Islanders’ diaspora and their connection with their homeland via the reggae scenes in Southern California and Hawai’i.

This article was published as part of a special issue on “Pacific Encounters.”